Home IN THIS ISSUE Augmenting Tradition
IN THIS ISSUE
SPACES
November 1, 2016 Kim Ranjbar 0

The Windsor Court Hotel reopens its distinguished and refurbished Polo Club Lounge after a summer-long expansion. 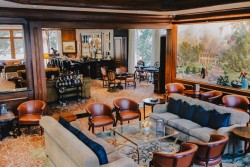 For more than three decades, the Windsor Court Hotel has been an inviting place, offering luxury and refinement to visitors and locals alike. During the recent summer months, the popular Polo Club Lounge underwent a $300,000 restoration and expansion — adding approximately 930 square feet — that allows for additional seating and an expanded venue space for local musicians. “We’ve had an awesome response from guests and also from the staff,” says Joey Worley, director of food and beverage at the Windsor Court Hotel. “It’s very important to us that our team is happy and comfortable in their working environment.”

Inspired by old-world British clubs, the Polo Club Lounge, as well as the rest of the hotel, has always featured a mixture of French and English decor with an extensive collection of English art centered on the royal family and Windsor Castle. In between the Lounge and The Grill Room, the Windsor Court’s fine dining restaurant, there was a sort of neutral ground — a space that wasn’t being utilized to its fullest potential. Worley and General Manager David Teich got together and conceptualized the recent expansion, and the results have been more than satisfactory. “Our idea with the project wasn’t so much to change the Polo Club Lounge as it was an expansion,” Worley says. “Between The Grill Room and the Polo Club Lounge the whole second floor just flows a whole lot better, and I am really happy with the way it worked out.”

Architecture and design firm Montgomery Roth was tapped to carry out the expansion, a local company that has a long history working with the Windsor Court Hotel. Considering the focus of the expansion was to make the space look like it had always been a part of the hotel, Montgomery Roth’s biggest challenge was to seamlessly blend the decor and furniture together. “The hotel itself commands a level of elegance and refinement that always challenges us,” says Emily Stewart, senior interior designer at the firm. “We didn’t want this expansion to look like an afterthought.”

The design team was meticulous in its efforts, from installing all new lighting to commissioning new furniture to match the existing pieces in the Lounge. “Pulling all of the details of the Polo Club Lounge into that new space was our biggest hurdle,” Stewart says. “Emulating the wood paneled divider with the glass inserts was a huge part of that project, making it look like it had always been there.”

Local contractors Carimi Construction & Development worked closely with Montgomery Roth on the project, a critical aspect to finishing on time and on budget. “It was a real honor to take on the expansion of such an iconic gathering spot in the city,” says David Carimi, president of Carimi Construction. “The Polo Club Lounge has always been a favorite place to meet with friends and family, especially during to holidays.”

As an accompaniment to the expansion, The Grill Room’s chef de cuisine Gabriel Charpentier has designed a new menu for the Polo Club Lounge that features elevated pub grub. Selections include an iceberg wedge salad with pumpkin dressing and sage; oxtail ragout poutine with pickled shallot and a soft poached egg; a Windsor Burger Royale with beer-battered onions and Lorenzo sauce; and, of course, fish and chips made with Gulf-caught grouper in an Abita Beer batter.

Easily one of the most exciting aspects of the newly expanded wing is that it provides the perfect backdrop for the local jazz performers regularly featured, namely “The Songbird of New Orleans” Robin Barnes. Already a local sensation, Barnes recently made the Billboard charts with her new album, Songbird Sessions, which landed at No. 5 for Current Traditional Jazz Albums. With the Polo Club Lounge’s installation of top-of-the-line lighting and sound equipment, Barnes once again has a stage to captivate audiences weekly with her dazzling vocal talents and elegant stage presence.

347
previous Support System
next The Future of LSU Football