Amanda Shaw, the renowned fiddler and singer, grows personally and as an artist with a new EP of original music. 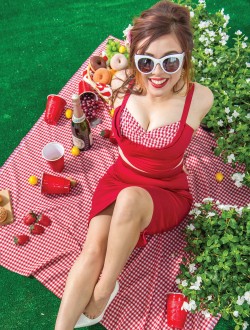 It’s impossible not to want to smile and break out into joyful dance when listening to Amanda Shaw. The effervescent, beautiful and brilliant New Orleans-based fiddler and singer has impressed legions of listeners locally, nationally and around the world with her serious chops, and her highly unique and exciting musical style. It can best be described as an eclectic gumbo of sound, including traditional Cajun dance music, funky R&B, rock, Delta blues, country and modern pop. In September, Shaw released an EP of diverse original new music that honors her Louisiana roots, while indicating her future as a maturing artist and delivering major crossover appeal. The EP also offers a personal look at Shaw both artistically and individually.

“I’m particularly proud of this EP because I feel I grew as an artist and as a person,” says Shaw, a big star and a serious musician with a warm, down-to-earth personality. “I’ve done music since my childhood, and, at some point, I realized this whole life thing had been going on. I had to ask myself, ‘Is this who I am? Has my career already been decided for me?’ I was able to do some sessions and write with very talented people for this EP and truly learn my craft and own it, and through this process I found that this is absolutely who I am. I love all aspects of music: writing; production; performing; and being on TV. I know in my heart of hearts that I love waking up each day being excited about music.”

Featuring five original songs and a bonus track of Shaw’s popular cover of The Clash’s “Should I Stay or Should I Go,” the EP was produced by Steve Shebby and Shaw, who co-wrote with reputable composers such as Matthew Gerrard, who’s worked with Kelly Clarkson and Selena Gomez. It features guest artists George Porter, Jr. on the song “Crazy About My Boy” and Chubby Carrier on “Busybody.” The lead single is “Red Plastic Cup,” a fun, spirited tune written by Shaw and Gerrard.

“‘Red Plastic Cup’ just feels like home in New Orleans,” Shaw says. “I listen to modern pop songs about these fancy glasses and fancy drinks and stuff, but that’s not who we are as people. We don’t all get to wear designer clothes, and that’s not what you need in order to have a good time. The lyrics are ‘no exits for bad directions, no words for a sad conversation, sometimes it is what it is, sometimes you don’t get what you give, so grab your Champagne in a red plastic cup, go grab your best friends and drink it up,’ and that’s just the way life is. I felt like it was a moment that I lived.” The accompanying video for “Red Plastic Cup” was shot at the Bayou Barn in Lafitte and directed by Shena Mullins. “The music video was so much fun to make and it is very Louisiana.”

In lieu of a traditional CD release party for her new EP, Shaw held a contest and winners were treated to “The Red Plastic Cup” Experience, a private listening event on the morning of Oct. 8. “We rented space at The Music Shed, where part of the EP was recorded,” Shaw says. “We set up chairs for me and the band, and it was super intimate. The Lakehouse catered the food; we had a photo booth; and I got to spend time with some good fans.”

Shaw’s gratitude for her fans runs deep. “I wouldn’t have what I have without my people,” she says. “Any day they could decide, ‘Oh I’m so sick of this girl!’ So I’m thankful for the people who support me, because it’s incredible that for the last 15 years I’ve had this career.”

On her website, Shaw is offering holiday gift sets that include CDs and t-shirts, tote bags and sturdy reusable red plastic cups to commemorate her new single, embossed with a violin bow and the words Little Fiddle Apparel & Music. “I wanted to make things I really like and connect with my fans in as many different ways as possible,” Shaw says. “We named the branded merchandise Little Fiddle, because, when I was 8 years old, I went and got my little bank account and my LLC so I just felt like that’s where it all begin.”

Shaw’s love affair with the violin began at the tender age of 4 after an intense musical spark was ignited inside her as she witnessed an orchestra perform on TV. “Someone was playing violin and there was a connection,” Shaw says. “I was like, ‘I get it.’ I told my mom that’s what I want to do and she took me to lessons at Southeastern Louisiana University. My instructor was Dr. Yakov Voldman. I really loved it and the challenge it presented.” At age 8, the violin virtuoso made her debut with the Baton Rouge Symphony Orchestra, the youngest soloist ever to perform with the orchestra.

Although classically trained, the child prodigy developed an interest in wanting to play other styles of music. “It grew into Cajun music and different styles of Louisiana music,” Shaw says. “I started writing music and I loved it. I love the journey that music has taken me on. I just want to make music that I like, which ranges from Dolly Parton to Amy Winehouse to Led Zeppelin to The Faces. People are not just one shade. We’re full of different colors and that’s how music is too. And I feel like the violin is an extension of my personality. I don’t think of it as some sort of talent or anything because I feel like it’s just so much a part of me. It’s funny to me when people say, ‘You’re so talented.’ It’s like, oh no, it’s just how I do my thing. It’s like being married or something! I really love it.”

A festival darling to the nth degree, Shaw’s critically acclaimed albums, such as Little Black Dog and I’m Not a Bubblegum Pop Princess, are best sellers at the New Orleans Jazz & Heritage Festival. Shaw feels equally lucky to play for the massive crowds who pack her tour de force performances, such as the ones at the Gentilly Stage at Jazz Fest, and for the smaller gatherings of folks who watch her from their lawn chairs in front of churches, like they do at the Larose French Food Festival. “It’s amazing what I get to do,” says Shaw, a kind soul who morphs into a spitfire in heels onstage, sawing away on her fiddle with breakneck speed and powerful musical acumen. “It’s so fun to play Jazz Fest, Gretna Fest and the French Quarter Fest, and to feed off of the energy of those large audiences, and it’s equally exciting for me to play at like the festival in Larose, Louisiana. The atmosphere is the opposite; it’s a tiny town and the festival is right after church in the morning. The people embrace the music, and there’s so much hospitality there, and the vendors are so nice and always want to give you food.”

Profoundly happy to represent the people and culture of New Orleans and Louisiana, Shaw never tires of having been deemed Emerging Cultural Leader in 2009 by the state government. “I’m really proud to be the girl from here,” says Shaw, aka Louisiana’s Sweetheart. “I take the responsibility of ambassador seriously; the people here have given me so much. It’s really cool that New Orleans and Louisiana are like this idea that lives in people’s hearts — it’s a very magical thing. People who’ve never even been here dream of it. It’s such a spirit. When you travel and say, ‘I’m from Louisiana,’ people want to talk to you about music and so many things. It’s amazing we live here. I love it! I’m here to stay.”

In recent years Shaw moved from the North Shore where she grew up to New Orleans, and she loves life in the city. “Moving from Mandeville to the Bywater was so different,” Shaw says. “I love living in such a hot spot and meeting talented young entrepreneurs who really believe in what they’re doing. Great stuff is always popping up — art shows, restaurants, coffee shops. It’s renaissance-ish! Even though I’m 26, I’ve done music for a while. Sometimes it’s challenging to have fresh inspiration and not get stuck; art must always push forward. To meet creative people and to refresh, keep learning and apply it to my life is one of my favorite things about New Orleans.”

Shaw considers her longtime band members, The Cute Guys — Tim Robertson on guitar, Ronnie Falgout on bass and Mike Barras on drums — to be her best friends. “Aw, my Cute Guys!” Shaw says. “I love them so much! They jive; they fit; they are family. We’ve traveled all over; we’ve played in Switzerland and Brazil this year. I wouldn’t trade any one of them or a single moment with them for anything at all.” On Dec. 17, Amanda Shaw & The Cute Guys will play the Natchitoches Christmas Festival. Fans are encouraged to check her social media for more show dates and exciting things in store for 2017.

Shaw looks forward to celebrating the holidays with her family. “I’m very close to my family and love them a lot,” she says. “I grew up in a home where it didn’t matter how busy everyone’s lives got; at least once a week, it was important for our Latin family to all get together at my grandmother’s house. Everybody ate and spent time together. The holidays remind us of what’s important, especially given how busy I’ve been promoting new music for the first time in five years.”

A prolific music maker, Shaw is rarely far from her instrument. “I like to work for fun!” she says, laughing. The cute little fiddler girl has grown into a vivacious, stylish young woman and spends downtime practicing yoga, cooking healthy, baking and hanging out with her five dogs, Vivian Rose, Marlee, Frankie, Angus and Gizmo. Shaw is extremely passionate about supporting local animal rescue and adoption efforts, and she is an honorary celebrity co-chair for the 2017 Louisiana SPCA’s Howling Success Patron Party & Gala. “I am thrilled to be a part of Howling Success because I appreciate all that the Louisiana SPCA does for our furry friend community.” amandashaw.com