Local IberiaBank president puts employees and communities ahead of profit. 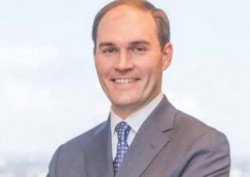 So it was likely no surprise to teachers and friends when he followed in his father’s footsteps as a banker, working odd jobs around the bank for as long as he can remember and helping to raise capital over the summer during college. After nearly 15 years in the industry full time, he has more recently been named the New Orleans market president of IberiaBank.

IberiaBank was established 130 years ago in Lafayette, but it has only been in New Orleans for the last 16 years. Hill says they have grown their market share here significantly — to 22 full-service branches and nearly 500 associates working in the greater New Orleans area. Services include commercial, retail and private banking, and wealth management. Hill feels strongly that the IberiaBank business model of market-centric growth has been a perfect fit for the small businesses, tourism industry and the community-oriented people of the New Orleans area.

Organizing by market allows local leadership to take the reins and make decisions on everything from new branch locations to how the bank will invest in the community. “We believe that allows us to feel more like a community bank in that we don’t operate like a big-box, one-size-fits-all model like some of our competitors do,” Hill says.

In fact, Hill says that community involvement is one of the biggest gratifications his job (and the jobs of his coworkers) offers. The company encourages its associates to determine where they might be interested in volunteering and even invites them to sit down with the marketing manager to discern their talents and how to apply them. “We foster and even push our associates to get involved,” he says.

The opportunities are endless, but, recently, several dozen people joined a project with the Preservation Resource Center to help paint a home in Gentilly. Another very popular charity is with the local Junior Achievement chapter, for which employees contribute to the financial literacy of local youth. JA recently announced that in the past year, IberiaBank has provided more volunteer hours than any other business entity in New Orleans.

Hill has also been gratified by some of the recent changes they’re advancing in competitive banking for the area. He helped push hard for improved deposit rates including 1.1 percent on personal savings accounts and 1 percent on corporate deposits.

“The other thing I get excited about is the everyday wins,” he says. “Helping our clients, whether that involves plans for expansion or acquisition, or helping with banking goals to make dreams a reality, clearly that is rewarding for me.”

Like many industries, banking has been through a good deal of recent upheaval. For Hill, that was the biggest challenge of his career and yet another opportunity. During the uncertainty of the financial crisis, while other 100-year institutions were being closed, consolidated or even gobbled up by foreign investors, he was helping build new locations for IberiaBank in Birmingham. He took pride in telling IberiaBank’s story and sharing how their legacy and strength could help put people’s worries at ease. “It was incredibly entrepreneurial and a heck of a lot of fun at the same time,” he says. “I worked with some great people and the numbers would tell you we’re successful.”

Hill feels the next million-dollar question (after what a new U.S. administration might look like for bankers) lies in banking technology. “I wish I had a crystal ball,” he says. “Our industry’s gone through a whole lot of change in my career. And it’s speeding up, not slowing down.”

For example, as mobile banking becomes more popular, will the brick and mortar locations close? Hill doesn’t foresee that for IberiaBank and says they aren’t replacing people with technology like bigger banks. IberiaBank will continue investing in their people, he says. The talent of each associate will always be a topmost goal so that customers get the utmost service.

“When you have a problem or a complex need, you’re going to want to be able to sit down with someone who knows you,” he says.

That investment seems to be paying dividends. New Orleans market employees voted IberiaBank to the Top Workplaces award in 2015 and 2016, and they have been nominated for 2017.

Between the great work environment and the service IberiaBank provides, Hill says, “We’re creating economic impact directly and indirectly that makes our city a better place.”

1.65K
previous The True Meaning of Christmas
next Carrying the Load