Get Through the Winter Blues

There’s a connection between vitamin D and depression. 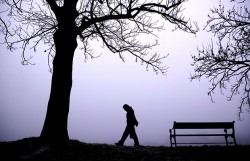 December marks the beginning of winter and if you’re anything like up to 20 percent of Americans, your personal version of Seasonal Affective Disorder is starting to rear its mopey head.

The American Academy of Family Physicians estimates around 6 percent of people suffer from serious SAD, and that it is four times more common in women than in men.

Common symptoms of winter depression include the following:

The specific cause of seasonal affective disorder have not been conclusively proven, but the Mayo Clinic and other researchers find several factors may be at play:

Your Biological Clock
The reduced level of sunlight in fall and winter may cause winter-onset SAD. This decrease in sunlight can disrupt your body’s circadian rhythm and lead to feelings of depression.

Vitamin D
The decreased sunlight also means a decrease in vitamin D exposure. The journal Psychiatry Research has found that people with vitamin D deficiency are more likely to have depression.

Serotonin Levels
A drop in serotonin, a brain chemical (neurotransmitter) that affects mood, might play a role in SAD. Reduced sunlight can cause a decrease that may trigger depression.

Melatonin Levels
The change in season can disrupt the balance of the body’s level of melatonin, playing a role in sleep patterns and mood.
Vitamin D deficiency can lead to depression any time of year.

In the Psychiatry Research study, 185 women between 18 and 25 participated in the study and interestingly, 61 percent of women of color had low vitamin D as compared to 35 percent of other women. More than a third of all participants with vitamin D deficiency reported significant depression.

The effect of the vitamin D deficiency on depression was static, even when other potential contributing factors were taken into account, such as time of year, race/ethnicity, diet, BMI and exercise.

What’s so special about Vitamin D?
It’s well documented that adequate vitamin D is needed to absorb calcium for bone health. Muscle and immune function also rely on normal levels of vitamin D in the body, and low levels of the vitamin have been linked with several types of cancer and cardiovascular disease. It seems to follow that the brain needs vitamin D for good health too.

How can you get vitamin D, especially in winter?
Here in mostly sunny New Orleans, we’re lucky. Even though our available vitamin D decreases in winter, we are still far enough South to absorb some seasonal sun.

Vitamin D isn’t a magic bullet for SAD or depression, but if you are able to decrease your symptoms with these natural methods, it’s worth a try to avoid complicated medications and their potential side effects. Depression has been shown to be best managed by a multi-faceted approach, including exercise, meditation, a good diet, sleep and positive social connections. As always, talk to your doctor about the role of vitamin D in your depression.