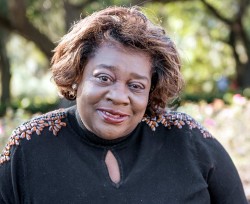 While battling ovarian cancer, Debra W. South-Jones made a deal with God. “I asked him to give me my life back and I would help those who were suffering like me,” she says.

Unable to work and yet unable to qualify for food stamps, the recent single mom was sick and humiliated. But family and friends helped keep her and her two children on their feet. And following a post-chemotherapy MRI, she says, she discovered God had kept his promise. The cancer, which had spread from her ovaries to her thyroid, was completely gone.

“The doctor couldn’t believe it,” she says. “He said, ‘God does a lot. This is truly a miracle. God is really working in your life.’”

Just the Right Attitude, a non-profit food pantry and assistance program South-Jones created out of her garage in 1999, was keeping up her end of the bargain. The program has grown to include outreach in New Orleans East, Ascension Parish and eight housing complexes of senior citizens.

Her primary focus at JTRA is to be there for those who fall between the cracks like she did. She refuses city, state and federal funding because she doesn’t want to put a salary cap on her clients who need help.

“If you made $32,000 last year, you didn’t bring home $32,000,” South-Jones says. “Your wife is sick; you’ve got kids; things are hard. Government assistance won’t help because they say you make too much money, but your kids are starving.”

A counselor interviews each potential participant and helps them set up an action plan. JTRA is also able to make referrals like with Total Community Action, which helps with utility shortfalls and employment assistance. From the start, the program makes it clear that they are a hand up, not a hand out. “My goal is to fill in that gap until you get on your feet,” South-Jones says. “It’s not a program where you can make a living.”

Being the only food pantry to come back right after Hurricane Katrina, South-Jones is used to feeding a very large number of people. After the storm, South-Jones says that with tractor trailers from Delmonte and resources from Second Harvest, they worked with around 20,000 families per month from New Orleans to Pearl River and beyond. Long lines snaked through the parking lot where they were passing out groceries and backed up on to the highway.

Those numbers have evened out to a more manageable but still astounding level: 172,000 hot meals last year and groceries for 32,432 people. They provide ice and food to the homeless; pass out hundreds of Thanksgiving turkeys and meals, Christmas food and gifts; and recently, extended assistance in Baton Rouge following the floods.

When a family hears that JTRA can help them, South-Jones says, their eyes light up and they’re in disbelief. They’ve often heard ‘no’ from other agencies. But the best part of her job is getting to say goodbye. When someone comes back to visit and say how much the services meant to them, it feels like success. It’s then that all of her hard work is worth it.

In addition to the backbreaking work of standing long hours serving food and the frozen hands she experiences from handling summertime ice distribution and holiday turkeys, she makes a daily haul from her home in Geismar to the New Orleans JTRA location. One night, after a particularly long day of serving food, multiple meetings and a panel session on hunger at Tulane University, she was so tired she couldn’t find her house in the dark. She called her husband in tears asking him to put the porch light on so she could make her way home.

So after many years, many miles and so much work, retirement might be in South-Jones’ near future. Her son, who is the program director, and her husband, who has handled the homeless outreach for JTRA since his retirement, are also ready to scale back. The problem is, she has been working her whole life and she isn’t sure she knows how to stop. And sometimes, she gets so overwhelmed by what so many people are going through that she can barely stand it. She thinks about her homeless clients, her jobless clients and her clients who don’t have money for electricity and are using kerosene lamps as their only light source.

She knows it will be hard to step away. “It can break your heart to see how some people struggle to try to survive,” she says. Luckily, there are organizations such as this. jtra.org