From High Wire to Homeless Help 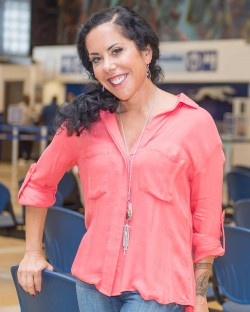 Professionals in the performing arts go in to a career knowing it likely won’t last a lifetime. As a circus aerialist, Lorelei Ashe said she was spoiled rotten and deliriously happy. She had a strong feeling whatever came next couldn’t be half as good.

She’s now five months in to her second career as the director of community relations for Grace at the Greenlight, and she can’t believe where she’s landed.

“It’s less ‘sequiney’ but very important,” she says, laughing. “I never thought I’d have the opportunity again to say with joy and an open heart that I love what I do, but I love what I do. I feel blessed in a way I can’t even express.”

Grace at the Greenlight is a not-for-profit organization founded by lawyer and businessman Chris Beary that empowers homeless people in their choices and helps meet their basic needs with compassion. The name comes from the many downtown intersections where Beary handed out cash on his way to work each day. (Though money typically changes hands when the light is red, the green signifies moving forward and positive change.)

As director of community relations, Ashe wears many hats. This morning at 6 a.m., she was likely serving breakfast to the homeless who come to Greenlight to eat each day. She works with all of the charity’s volunteers, alongside the director of outreach Sarah Parks — constructing hygiene bags, organizing a coat drive, and providing water bottles and meals, including with the young women of Louise S. McGehee School who sponsor a week of meals every quarter that tenth grade students take turns serving.

Ashe also handles all social media, web updates, brochures and marketing. She meets with potential sponsors and organizes the many small fundraisers — like Yoga for a Cause with Reyn Studios or Shop and Share at Mandeville’s Lilly Pulitzer — that help make up their annual budget for travel and food. (Beary pays administrative costs so that all funds raised go directly to support the homeless.)

By far the best project Ashe gets to be a part of, she says, is sending people home. Greenlight pays bus or train fare to reconnect the homeless — veterans, young people, old people, stranded people — with someone willing to look out for them. A homeless man with a PhD got transport to Seattle recently where he’s met his grandchildren for the first time and has not touched alcohol since.

In just two short years of existence, Grace at the Greenlight has reunited more than 600 people with their families. At the three month follow up, only 4 percent of people were back on the streets.

Grace in this case — though it means something different to each person — is getting that second chance, someone offering to help when things are grim. “People like me and you … we’re so fortunate to have a supportive family … but life happens,” Ashe says. “I’ve been robbed; we’ve all had hard situations. Some people, if they get robbed at a bus station, they have no means and end up on streets. Sometimes people just need a chance. It’s really an amazing thing to be able to reunite them with loved ones so they aren’t alone anymore. We weren’t meant to be.”

Another recent program Ashe helped pioneer is printing graceful change cards that donors can give to panhandlers inviting them to a meal at Grace. The charity believes strongly that instead of cash, concerned passersby can give care instead. Handing out the card is a way of showing concern and giving the homeless person dignity and a choice.

As a small, rather new non-profit, Greenlight is always looking for financial and in-kind donations to help reunite and feed more of the estimated 7,000 homeless in New Orleans. But volunteers have many gifts, so whether it’s a graphic designer who can help with the website, a crochet artist to make recycled grocery bag sleeping mats, or anyone who just wants to get involved, Ashe is open to all help.

After all, she’s a volunteer too.

On her birthday, Ashe plans to take the day off. But early that morning, you’ll find her at Grace at the Greenlight volunteering her time to serve breakfast. “I can’t think of a better way to celebrate my good fortune,” she says. And her work feels like a gift. “That moment when you give or receive help; that connects us all.” graceatthegreenlight.org