From Very Ill to Feeling Great 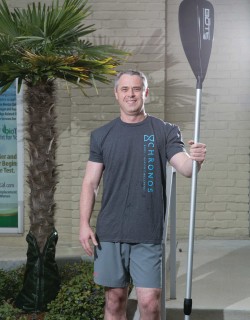 For Robbie Ludlow, transformation goes a lot deeper than just looking great. In less than a year, he has gone from being frequently sick with multiple nutritional deficiencies, no energy and sore joints, to the picture of health. Losing more than 50 pounds is just a giant bonus.

THE NOT-SO-GOOD OLD DAYS
“I was approaching 40 and beginning to fight genetics,” Ludlow says. “My father had quadruple bypass heart surgery during my youth. That has always worried me. He was a very large man, but a lot of it was his own doing. He smoked, ate the wrong kinds of food and did not exercise at all. His weight has been on my mind my entire life.”

ON HITTING ROCK BOTTOM
“I got very ill in the last few months of 2015 with multiple sinus infections and cold-like symptoms that would just not go away,” Ludlow says. “I was doing Crossfit at the time, but it was so bad that I had to stop working out. I lost all the good things I had gained from it. Crossfit was rough on my joints, but not working out made my joints worse. I had gotten down to 230 pounds, but, in the early part of 2016, I became depressed and started eating out more and having drinks with dinner. My weight ballooned to 250 pounds. I always felt tired, had no energy, had no body confidence and my mind was foggy. This past May, I hit rock bottom when I realized how badly my quality of life had tanked.”

THE TURNING POINT
“My constant state of illness, lack of energy and being the heaviest of my entire life finally drove me to do something about it,” Ludlow says. “This time I wanted to seek out professional help. Dr. Mace Scott — the co-owner of Chronos Body, Health, Wellness — is my neighbor, so I started there. I had a sneaking feeling that a lot of my health issues were hormone related. Most men do not want to admit this, but my symptoms did not lie. I also met Luke West, the fitness director at Chronos. We hit it off instantly, and he connected me with a three-phase meal plan, nutritional classes and supplements, and a workout not as physically intense as Crossfit but still challenging.

Unsurprisingly, my blood work came back that I was severely deficient in testosterone and vitamin D. Dr. Scott prescribed medication to correct the deficiency and introduced me to Biote, a very innovative hormone replacement treatment.”

BIGGEST THRILLS
“I went from barely being able to press the bar itself, much less do a single squat, and I can now bench press my own body weight,” Ludlow says. “And I can squat 254 pounds — more than my body weight. I can also easily do pull ups when I could not do a pull up at all in the past. The scale is going up because I’m putting on so much muscle, but my waist continues to stay slim. I went from a 40- to a 36-inch waist. I now feel so good. I have energy. My mind is sharp. My joints feel fantastic. My sinus illnesses as well as stomach issues have all disappeared. The change has been almost miraculous.”

GETTING UP AND MAKING IT HAPPEN
“There is really no secret that keeps me going,” Ludlow says. “The results of all this hard work continue to motivate me. I never want to go back to feeling that bad again, and I love looking into the mirror for the first time in my life. My original goal back in May 2016 was to lose 40 pounds before my fortieth birthday. We had eight months to pull it off. Luke helped me crush that goal in four months. By the fifth month, after 50 pounds, I told Luke I wanted a six pack. The goals keep changing. This is fun.”

WISDOM TO SHARE
“I eat five times a day and allow myself to cheat about once a week.” Ludlow says. “I work out with Luke three times a week for an hour. We combine cardio with weight training, moving from high rep work to heavy weights every two weeks. I highly recommend a personal trainer! I love it because he always surprises me with a new exercise and routine.”