Movement: The Fountain of Youth 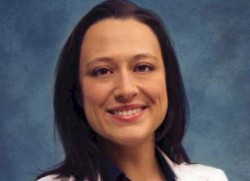 On her way to a PhD in microbiology, podiatrist Amber Poirot, D.P.M., realized she was in the wrong line of work. She was writing a thesis on whether or not oysters had a sense of taste. She came home after researching one day and realized, who cares?

“I thought to myself, ‘My contribution to society is nothing right now,’” she says. “‘I’ve got to do more with my life.’”

Flash forward about 10 years. A diabetic elderly patient who can’t reach her feet shuffles in to Dr. Poirot’s office. Her toenails are rubbing her shoes and causing great discomfort. A few snips later and the woman is deliriously happy. And here was the warm, fuzzy feeling Dr. Poirot was looking for in a career.

“It’s amazing how you can make a big difference with the smallest little things,” she says.
In her brand new East Jefferson Podiatry Clinic, Dr. Poirot does a lot more than just clip toenails. She is right down the hall from the new East Jefferson Wound Care Center and offers follow-up care for high-risk diabetics in hopes of preventing amputations and promoting overall foot wellness.

“I feel like there’s a new subspecialty in podiatry, and it’s diabetic feet, especially sick feet getting wounds and patients being admitted to the hospital,” Dr. Poirot says. With good follow-up care, aggressive prevention and routine maintenance, re-admittance to the hospital is easily preventable for many. Her mantra sounds a little like the TSA’s anti-terrorism slogan: If you see something, say something.

It makes a huge difference to her success that the team of physicians at East Jefferson, in the podiatry residency program and in the Wound Care Center are extremely supportive of this model of care, Dr. Poirot says.

“There are plenty of diabetics in the community and plenty of need in this aging population,” she says. The American Diabetes Association estimates that 1 in 4 people over age 65 have type II diabetes and may be in need of foot care. “You want to stay mobile,” she says. “If you keep moving, you’ll stay young.”

Though she is often surprised by how much some of her new patients know about diabetes, wound care and hyperbaric medicine, she says one of her goals for the clinic is to offer more community education opportunities for diabetes sufferers and their families.

She also has to work against some of the myths and stereotypes people sometimes attach to podiatry. She herself had a lot to learn when first investigating the field and was surprised to see the breadth of work, which covers skin, bones, joints, surgeries and more. She was also pleased with the extensive training and the required residency for all podiatrists. She feels many D.P.M.s are well-trained and on par with M.D.s.

“The question I get the most is, ‘Why feet?’” she says, laughing. “Why feet? Why not? Going in to it, I didn’t realize the overall general health and the symptoms of diseases you can see through your feet.” For example, when she can’t find a pulse in her patient’s ankle, there is a heavy suspicion of clogged arteries. Numbness and foot pain can be a herald of diabetes. A loss of foot hair can be another sign of vascular issues.

Maybe it was because her first job was working with oysters, but one thing Dr. Poirot didn’t realize going in to her position is how attached she would get to her patients. And how personally she would take it when a previously healthy foot started to have problems.

“It’s as if I were painting a picture and someone ripped it in half,” she says. “I’m still surprised by my heartache when things take a turn for the worse.

“These patients are here every week, and, after a while, you start to learn everything about them: their kids’ names, where they play bingo … they really feel like family. That foot is my foot too.”

1.28K
previous For the Love of Health
next Lisa Dang, M.D.