Home IN THIS ISSUE In Davis We Trust
IN THIS ISSUE
SPORTS
January 31, 2017 Paul Wegmann 0

In Davis We Trust

Anthony Davis surges from star to legend in New Orleans. 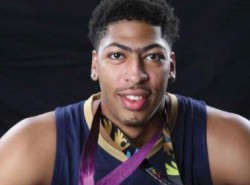 The NBA playoffs have been an infrequent occurrence in the Big Easy in the 13 seasons since the New Orleans Pelicans moved into the National Basketball Association’s Western Conference in 2004. In fact, the franchise has made the playoffs in only four of those seasons and have made it past the first round only once. That span has overlapped a particularly competitive era in the history of the NBA as the West has perennially been in a golden age of winning basketball —despite the expanded format of the Association, no Western Conference team with a losing record has made the playoffs since 1996-97. At the same time, the top of the West has regularly been brutally loaded with the best teams in basketball, from the San Antonio Spurs to the Los Angeles Lakers (until a few years ago) to the Los Angeles Clippers and the new lords of the conference, the Golden State Warriors. Meanwhile in the Eastern Conference, multiple teams with losing records have made it to the playoffs seemingly every year, but the Pelicans have not been so fortunate to play there.

Entering February, the 2017 season brings unusual opportunity in that the eighth and final spot in the conference playoff race is fairly wide open — despite an abysmal 0-8 start, the Pelicans appear poised to be within two to three games of gaining a foothold in that crucial position — but that opportunity also brings pressure for management. The franchise’s linchpin, Anthony Davis, appears poised to be a top-five player for years to come, and he is only accelerating to new heights, which is truly astounding considering the lofty level he has reached before. Still young, at 23 years old, Davis is essentially where players used to enter the league after having left college, yet he already has four years of experience, all of which have resulted in All-Star Game appearances. He is a true league superstar, but he does not play in a large or marquis market, thus the franchise is poised with the same challenge they faced with Chris Paul, who left for the Los Angeles Clippers after six years of early frustration. The fact is most star players expect their teams to build around them to deliver playoff seasons and franchise turnarounds within two or maybe three years. Whether the Pelicans make the playoffs for the second time in Davis’ four years may have the most bearing — not just on this season, but, foreseeably, on the near future of the franchise. The crucial nature of the 2017 playoff drive is all the more clear in light of the decision to hire Alvin Gentry after the Pelicans had made the playoffs in Davis’ second year, followed by last year’s slide from a winning season (45-37) to a losing season (30-52).

Davis’ continuing elevation of his game to truly historic levels only adds to the franchise’s pressure to succeed, as Davis is exceeding not only what Paul accomplished individually but also entering the conversation with past superstars of legendary status. In January, against the New York Knicks, Davis became the first player since 1983 to score 40 points, take 18 rebounds and 3 steals in 30 minutes of play. That same game was the fifth straight in which he scored 20 points and gained 15 rebounds, which is something only three players have accomplished in the last 30 years, two of whom are Charles Barkley and Hakeem Olajuwon. Just as an example to demonstrate that hyperbole is not at play here but the phrase “legend in the making” is: In Davis’ first 10 games this season, he scored 313 points and took in 108 rebounds. The other players to match that feat make up a short but incredible list: Wilt Chamberlain; Elgin Baylor; Karl Malone; Kareem Abdul-Jabbar; Shaquille O’Neal; Bob McAdoo; Rick Barry; Walt Bellamy; and Jerry West. That is the kind of company Davis is keeping these days.

The pending question though is what kind of company is the front office providing on the floor in 2017 as the team makes one of the most important playoff drives in its history. The return of Jrue Holiday has been extremely helpful, as the team began playing near .500 ball when he arrived from the injury list. Holiday’s decision-making and quickness appear to be the difference in winning close games, and it is clear that Gentry’s commitment to him has been a terrific decision and an important improvement over last season.

Holiday’s inside passing has been complemented by the outside shooting provided by local find Langston Galloway and first round draft pick Buddy Hield, who together look to have the potential to give the Pelicans two outside shooting threats for the first time in recent memory. Hield in particular seems more and more to be taking on a clutch role reminiscent of his days at Oklahoma University — where he became a college star, while earning a reputation as a high scorer and winner. He may ultimately emerge as one of the best rookies of 2017 and his ascendance as a star in his own rite would help Davis not only on the court but also likely take pressure off him personally. Meanwhile, free agent finds like Galloway are often essential to any franchise looking to build quickly.

The Pelicans find themselves in a conundrum: As fans gawk wide-eyed at Davis’ incredible deeds, their best games and maybe even the franchise’s near future depend primarily on the play of the surrounding roster — and indeed there is much promise there. However, fans watching the games in New Orleans are watching a player who might emerge as one of the greatest ever — a future Hall of Famer in his early years putting on a startling display of world class athleticism in the game of basketball — in short, a legend in the making.

87
previous Ballad of a Boutique
next Arts: March 2017