For the Thrill of It

Bryan Ferry, the Roxy Music icon, appears in New Orleans for the first time in years to perform at the Saenger Theatre. 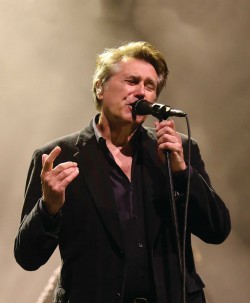 New Orleanians can now breathe a collective sigh of relief: After a long hiatus, pop rock icon Bryan Ferry will be heading back to town to perform in concert. With his avant-garde glam rock band Roxy Music that he formed in the early ’70s in London, the singer/songwriter infused new life into popular musical, electrifying it with an exotic, progressive and pulsating sound never heard before that quickly resonated with a generation. Throughout his prolific solo career, which paralleled his Roxy Music gig in the early ’70s and is still going strong today, Ferry has continued to break musical ground and entice with his brand of sophisticated pop music.

Perhaps it’s his gorgeous, distinctive vocals that seductively bend and wind effortlessly throughout his contemplative, ethereal and romantic compositions that has everyone swooning. Ferry is heralded as one of the most innovative and critically acclaimed artists in modern times, and he is revered and respected by his fans and peers alike. He has sold more than 30 million Roxy Music and solo albums combined. In 2011 at Buckingham Palace, Ferry was awarded Commander of the Most Excellent Order of the British Empire by Queen Elizabeth II in recognition of his monumental recording career. A rare one-night-only appearance by Ferry in New Orleans on March 16 at the Saenger Theatre will be the show to catch.

“We thought it would be nice to make a real effort to go to some places that we haven’t been to for a very long time in the States,” Ferry says from his West London studio, where rehearsals with his touring band are in full swing. “Normally, we tend to go to the Northern part, Boston and New York and so on, so to come to the South is really quite exciting for us.” In addition to New Orleans, Ferry’s 2017 tour will take him elsewhere across the United States, Canada and Europe.

Surprisingly, this will be only the second time that Ferry performs in New Orleans. “I played in New Orleans with Roxy Music, oh, a long time ago,” he says in his signature calm tone and polite manner. “I think I was there with Roxy on the Siren tour, in 1976. It was at The Warehouse.” Indeed, on Feb. 27, 1976, Roxy Music did a show at the now-defunct legendary rock music shrine on Tchoupitoulas Street that included Journey on the bill, with tickets going for $6. “It’s extraordinary, isn’t it? So yeah, we’re really looking forward to it very much. We’re working on the show now actually in London trying to get stuff ready. We’ve got a couple of new people in the band so we’re breaking them in now. We start in a couple of weeks in Florida with our first show. It will be fun to go to Texas again for instance. I haven’t been there for a very long time as well. We’re doing a kind of retrospective show, which covers a lot of the Roxy songs and songs from the solo records, and it’s really tough trying to squeeze them in because there’s a lot of songs to choose from.

His repertoire is immense, composed of 23 studio albums alone — including Roxy Music tunes such as “Love is the Drug,” “The Thrill of It All” and “More Than This,” and solo gems like “Let’s Stick Together,” “Slave to Love” and “You Can Dance.” “Since I’ve got quite a big band, there are a lot of musical colors we can draw from, so that’s good,” Ferry says. “Now we have sax, and a couple of guitars, and a violin and a new girl who plays viola very beautifully, so, yeah, we’ll be covering all the various bases. There are some very good players in the band, and I’m trying to make this tour as musical as possible. We’re going to have a great time.”

The historic, state of the art Saenger Theatre’s plush, velvety environs and twinkling indigo ceiling make it the perfect venue in New Orleans to host Ferry as he escorts the audience into a hypnopompic trance with his sensational and unparalleled aural duende. Opening for Ferry is singer/songwriter/pianist Judith Owen who calls New Orleans home part of the time with her husband, comedian, actor and activist Harry Shearer. Her new album, Somebody’s Child, features a cover of Ferry’s hit song “More Than This.”

She supported Ferry on his 2015 U.K. tour, accompanied by renowned musicians Leland Sklar on bass, drummer Russ Kunkel and guitarist Waddy Wachtel. “When I heard that Waddy was in the band I said, ‘Oh great,’ because he played on one of my albums, The Bride Stripped Bare,” Ferry says. “He’s a fantastic guitarist, and I knew Lee Sklar and Russ too. So yeah, it was fun having them opening that tour for us.” For this show, Sklar will accompany Owen.

Ferry is a true visionary and has an uncanny ability to keep his music modern, while infusing it with nostalgia, resulting in songs that always sound fresh (no matter the age), and he’s always remained adventurous in his approach to composing music. “Well, I’ve got a great respect for history and the past, and I love various kinds of music — gosh, especially American music of the 20th century,” Ferry says. “It’s been an incredible musical journey from 1920 onwards. But I don’t think I’m particularly in tune with a lot that’s going on right now. I don’t listen to the radio to new music. I tend to listen to old stuff, to classical music, and I’m always learning or trying to learn about other stuff that I haven’t heard before. I try to plow my own furrow, you know.”

Ferry has masterfully covered many other artist’s songs, including John Lennon’s “Jealous Guy,” Jerome Kern and Otto Harbach’s show tune “Smoke Gets in Your Eyes” and Lou Reed’s “All Tomorrow’s Parties,” always making them his own standout creations through dramatic re-interpretation instead of generating cheap karaoke versions. His latest solo album, Avonmore, released in 2014, has been hailed critically as a modern classic and includes Ferry originals such as the fabulously thrilling “Loop De Li,” the emotionally yearning “Driving Me Wild” and a haunting cover of Robert Palmer’s “Johnny and Mary” with DJ Todd Terje. “My son Isaac is a DJ, and he’s introduced us to quite a few young DJ mixers,” Ferry says. “It’s interesting to see what they do. This guy Todd Terje, the Norwegian, is a very good musician, and he did a few things for us and they were terrific actually.”

Handsome and impeccably dressed, Ferry has been dubbed the “Coolest Englishman Alive” and the “Sultan of Suave.” Famous for injecting some fashion verve into mainstream music when hippies and blue jeans were de rigueur, the debonair mythical man happens to be warm, witty and a tad shy. Born into a close-knit, working-class family in Washington, County Durham in Northeast England, Ferry grew up loving music and movies. He also was struck by the beauty, glitz and glamour of old Hollywood and the seemingly fabulous life that accompanied it. He worked in a tailor’s shop as a teenager and honed his passion for visual aesthetics by studying fine asrt at the University of Newcastle upon Tyne under British pop artist Richard Hamilton. After being fired from his job as a ceramics instructor at a girl’s school for playing rock and roll recordings in class, Ferry formed Roxy Music, whose longtime members were guitarist Phil Manzanera, sax and oboe player Andy Mackay, and Paul Thompson on drums and percussion (with other members, such as music guru Brian Eno on synthesizer and “treatments”). Ferry envisioned the band to be experimental both musically and visually, and he cultivated highly stylized looks throughout his career with the help of his friend, fashion designer Anthony Price, from sequins and wild leopard prints to the designer suit and tie combos the elegant balladeer is known for today. Even Ferry’s album covers are works of art and have featured some of the world’s most notably beautiful women, including Kate Moss and Ferry’s ex-fiancé Jerry Hall. Friend and interior designer Nicholas Haslam famously said that Ferry was a rockstar more likely to redecorate a hotel room rather than to trash it.

Ferry is a jazz aficionado and was drawn to the genre at a young age. He formed The Bryan Ferry Orchestra, and, in 2012, released The Jazz Age, an album of instrumental remakes of some of his own material done instrumentally in a 1920s jazz style, which put the spotlight off of Ferry’s vocals and on to his chops as a songwriter. The Jazz Age was influenced in part by New Orleans legend Louis Armstrong’s inventive and natural improvisations; Ferry’s hit “Love is the Drug” is done in a sort of funeral dirge style and his song “Avalon” was performed in an up-tempo Creole Mardi Gras style, according to Ferry.

“There have been so many great musicians from New Orleans,” Ferry says. “Apart from Louis Armstrong, there’s Fats Domino, The Meters, Dr. John — I love all that stuff. It’s a very kind of unique mix in New Orleans, isn’t it, with all that French Creole thing, and the era of Sidney Bechet and so on. It’s a very rich kind of culture there in New Orleans. It’s a great meeting place for various cultures.”

Ferry has travelled to New Orleans only once since his show at The Warehouse in 1976. “I was there about six years ago to visit a friend of mine, a producer named John Porter, who actually played on a couple of albums that I did many years ago,” Ferry says. “We were at university together. John made some very good blues records like John Lee Hooker, Buddy Guy — I think he won a Grammy for that. He lived in New Orleans for 10 years and moved back to England.” Indeed, Porter is a recording industry heavy hitter as well; he’s worked with artists such as The Smiths, Eric Clapton and The Wailers, as well as Ferry and Roxy Music.

Ferry is particularly excited about his upcoming trip to New Orleans and plans to bring two of his four sons, Tara and Merlin, with him to partake in the cities’ quintessential cultural delights. “Well, when you’re on tour, the days often really become important when you try to experience the culture of each city that you go to in each part of the world, and it’s something we try and get right,” Ferry says. “Normally we’ll go to somewhere interesting, like a museum or some art gallery in the daytime and find a restaurant that’s going to be an interesting place. I’m looking forward to our visit to New Orleans very much. There’s some great food in New Orleans, isn’t there?”