Some heroes are unsung, making their stories all the more worth telling. 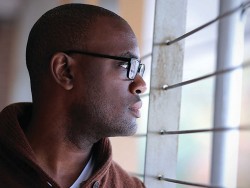 That’s the motivation behind Allstate Insurance Company’s Worth Telling campaign and the reason Aaron Walker — founder and CEO of local non-profit Camelback Ventures — was selected to share his tale. This year, in celebration of Black History Month, the campaign highlights three African Americans nationally who are all making big contributions to their community and inspiring others to do the same.

Walker’s story includes a zig-zag path through a University of Virginia degree in foreign affairs, a stint teaching in Philadelphia via Teach For America, a law degree from the University of Pennsylvania, a New York City law firm job to help pay back law school loans, a gig in city government to incubate new education ideas at Fund for Public Schools in New York City and, after that, a failed business startup. The story unites all the pieces (and lessons) and culminates most recently with the creation of Camelback Ventures, a non-profit organization that offers coaching, capital and connections to entrepreneurs of color (and all females).

The group looks for projects that advance education and social innovation when awarding its six-month fellowships. The fellowships include one-on-one mentoring, up to $40,000 in financial backing, and on-line and in-person summits to enhance networking.

“When black and brown young people see teachers who look like them, the research shows that they do better academically,” Walker says.

Walker sees his non-profit organization as bridging the gap to help worthy business ideas get off the ground. “Genius is equally distributed across communities, but access to funding is not,” Walker says. Since its inception, Camelback Ventures has worked with 24 groups — 21 in last two years — and the organization is on target to reach 40 by the end of 2017.

Though he hails from New Jersey and has lived up and down the East Coast, Walker has loved New Orleans a long time and knew at some point he had to be a part of it. After interacting with different entrepreneurs in the community and hearing the mayor proclaim, “If you don’t believe in inclusive innovation, then this city is not for you…” he was all in.

Walker works hard to honor the inspirational people in his life: his children; his wife; his parents; and especially his grandfather, a pioneer who started a grocery store and ran his own construction business.

“He was really the first entrepreneur that I knew,” Walker says. “He set an example of the power of entrepreneurship — not only what it can do for families, but also for communities.” allstate.com/worthtelling, camelbackventures.org
About the name: Following the Civil War, families of the free black population resourcefully added a second story to the rear of narrow shotgun style houses, resembling a camel’s back. “Camelback Ventures is a nod to New Orleans, the history of the shotgun house and the evolution of homes built by blacks in New Orleans,” Walker says. “It’s a nod to the ingenuity of people of color.”

Best job ever: “It was a summer position during college at Harlem RBI,” he says. “I got a $100 stipend every week, which I used up taking the train to Harlem from New Jersey every day. Maybe I’d buy a slice of pizza for lunch. But being able to spend the morning with kids reading and writing, and then the afternoons with the baseball program … I had all these other fancy jobs … but I was really motivated by the kids I had there. That experience always stuck with me.”

Leaving teaching for a law degree: “The system that we’ve created in education is unsustainable,” he says. “It requires teachers to perform heroic efforts just to provide basic education to kids. For me the decision to do law school was to help me better understand and approach the problem from a more systemic level. And I came to see education as a fundamental and civil right, so I went to law school to answer that question. It was a continuation of the journey I was on to try to improve education for black and brown kids.”

In good company for Worth Telling: Though Walker served as a Pahara NextGen Fellow in 2014 and was featured on LinkedIn’s 2016 Next Wave list for Social Impact, he says he feels humbled by and deeply admires his fellow Allstate storytellers. “It’s really something special to be included with people doing so many amazing things in their communities and creating that ripple effect,” Walker says.

190
previous For the Thrill of It
next Personal Attention