If you’re at Antoine’s Restaurant in the French Quarter (and by the way, you need to go soon), ask to be seated at a table in waiter Sterling Constant’s section. 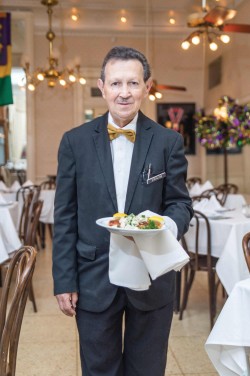 The urgency in the matter stems from the fact that Constant, as much an icon as Antoine’s itself, is celebrating his 50th work anniversary at the restaurant this summer and the media hoards are about to descend.

All the major news outlets are informed. The Steve Harvey Show has called about a segment. If the planets align, Harry Connick, Jr., might just enter the public relations blitz too.

Even Constant’s customers are playing paparazzi. “I’ve been taking a lot more pictures with people lately,” Constant says. “Everyone wants to meet the guy who’s worked here 50 years. I guess I’m a novelty.”

When the doors opened for dinner his very first night on the floor, a nervous Constant found himself quickly swamped with six tables to serve. But having already worked at Antoine’s awhile — first as a prep cook and then an apprentice waiter — he knew his job and didn’t panic. And he’s been not panicking with an untold number of loyal customers ever since.

In fact, that night he made his first lifelong customer — a woman who asked him for the French legume salad, hold the carrots. “A week later, she came back and I asked her if she’d like salad again, without carrots,” he says. “After that, I could do no wrong with her. While other waiters would leave, I would stay here all day. I’d stay and bring them their drinks and that’s how I’d acquire my clientele. The local people are very funny. They call and say, ‘I want Sterling. If he’s not here, we’re not coming.’”

He has an especially devoted following in the Krewe community after working 40 years of Carnival balls and after-parties. He plans ahead, stockpiling linens just after New Year’s Eve. He had a specialized platform built to display king cakes. He has mimosas and milk punch in hand, and wine breathing on the table when the first members walk in the door. It’s his specialty to get up to 1,000 people in and out of the restaurant in under three hours.

Sterling admits that at the age of 66, with type 2 diabetes and failing eyesight, he’s thinking about cutting back from his five-day workweek. He gets on the bus in St. Bernard Parish at 7:45 a.m. and some days works a 15-hour stretch. But he’s not ready to hang up his tuxedo yet. He’s heard stories of people dropping dead a week after retiring, and he’s not convinced he could survive it. “You hit a certain age and try to retire, and the body can’t handle [stopping],” he says. “As long as I feel good, I’m going to keep doing it.”

A Sterling reputation: “All the guys ask me where I get all my energy from,” Constant says. “I’ve been doing it so long … if I’m at home, I lose my energy, but if I’m here … once the engine starts moving, it doesn’t stop.”

Most famous customer: “People ask me all the time, who’s the most famous person I ever waited on,” Constant says. “And it’s you. Because I don’t put a movie star above anybody else.” (But for the record, he’s waited on Bob Hope, Jackie Gleason, Dr. Alton Ochsner and former governor Edwin Edwards. In the movie JFK, he is waiting tables in the Antoine’s scene starring Kevin Costner and Tommy Lee Jones.)

Changes through the ages: Since the 177-year-old Antoine’s prides itself on presenting original Creole Cajun cuisine, they actually strive to keep things the same. “None of the dining rooms have changed,” Constant says. “Maybe we’ve moved a few pictures or something, but that’s it. (The third and fourth floors were rebuilt after a wall collapsed after Hurricane Katrina, and they added a bar to boost post-storm business.)

On his off-days: “I sit in my recliner and fall asleep,” Constant says. He also still rides in Thoth and travels with his beloved granddaughter and her daughter, most recently to Las Vegas for a dance competition.

Secrets to good customer service:
1) Follow the beverage golden rule. “The first thing you do is get them their drinks,” Constant says. “Then you can get them the food at any time. If you can’t get them their drinks, then they’re going to holler.”
2) Collect packages and discarded items from around the table before the customer leaves — these days it’s most often cell phones.
3) Serve from the left, pick up from the right and plan on three napkins per diner.
“People appreciate that you’re looking out for them,” he says. “Take care of the guests that you have, and they’ll take care of you.”