This year’s New Orleans Fashion Week promises chic looks both on and off the runway. 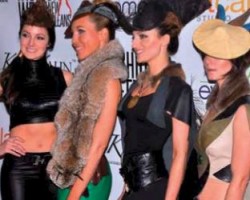 Coco Chanel said it best: “Fashion is not something that exists in dresses only. Fashion is in the sky, in the street, fashion has to do with ideas, the way we live, what is happening.” When New Orleans Fashion Week rolls out (March 18-24), you can bet all eyes will take note not only to the amazing fashions showcased on the catwalk, but also to the eclectic street styles worn by the fashion aficionados slaying on the sidewalk. In an age of Instagram, Snapchat and Facebook, street style has garnered as much attention as the collections the designers send down the runway. From cutting-edge to couture gowns, New Orleans Fashion Week welcomes it all.

The weeklong fashion fest offers tons of opportunities for fashion enthusiasts, influencers and trendsetters to make a fashion statement as they attend the amazing runway shows presented by designers from the Southern region and beyond. Whether you’re attending NOFW for the front row seat to check out the collections up-close and personal or to see and be seen on the red carpet, be sure you make a standout statement that’s eye-catching, unexpected and will get rave reviews as those fashions presented on the catwalk. This year at NOFW, all eyes are on you too!

154
previous Beauty: To the Rescue
next Shopping is My Cardio