A Little Love and Luck

The St. Patrick’s Day parade is a great way to get involved in New Orleans traditions. 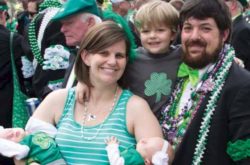 I decided I was moving home, back to New Orleans, in the spring of 2006. I told my boyfriend of four years that I was going, and he replied, “Guess I’m going with you.”

He jumped right in to living life as a New Orleanian. He purchased Saints season tickets. He adjusted to spicy, buttery food. He proposed after a dinner at Commander’s Palace, and he taught his family about second lines for our wedding reception. He made local friends and developed his own local holiday traditions.

When he asked what I thought about him marching in the Irish Channel St. Patrick’s Day parade, I wasn’t sure. On one hand, I knew he would have a blast. On the other, I remembered a few nights in college where he overindulged and I ended up having to undress him, force feed him a greasy meal and put him to bed. The way I remember it, I encouraged him to march and we haven’t looked back. He might remember a slight bit of protest on my part.

Year one, we found him a set of tuxedo tails at the Salvation Army store. Year two, I got him a kilt for Christmas and his dad came down from Tennessee to march with him. Year three, I dragged my one-month-old twins and my three-year-old to St. Charles Avenue so they could watch their dad march. (See? Crazy.) Year four, my father-in-law got drunk and separated from everyone, and we located him by pure luck. Year five, we had a double-booked day so I sent my husband on his way with his friends and trusted that he would behave himself … and he did.

We load up a backpack full of cheap beer, a flask of whiskey, a cigar, shamrock stickers and garters. He shares a flower cane with a friend (consider it a buddy system backup for drunk adults), charges up his phone and we agree on a rendezvous point. We try to see him somewhere along the middle of the route, before the beer takes over and the kids don’t ask too many questions. We collect him and a few of his friends, roll into the nearest burger joint, get them all fed and head home.

I’ve watched a lady reach up his kilt and a drunk nun put a wet sloppy kiss on his cheek. I’ve watched his ego grow as people beg for the paper flowers on his cane and he blushes when he gets to put a garter on someone. He saves the best stuff and the biggest kisses for us though. The kids think it’s the coolest thing that their dad is in a parade.

While he may not love the uninvited groping from strangers, he loves that he gets to do a special thing with a big group of his friends every year, and that it’s a low-cost way to be in a parade. He also loves that he can celebrate his Irish roots in a so-very-New-Orleans way. I mean, where else can you get drunk and come home with a week’s worth of produce that’s literally been thrown your way? Chicago may have their green river and New York may have a giant parade, but nobody does parading like New Orleans. Lucky us!