Celebrate St Patrick’s Day all month long quaffing whiskey at these New Orleans bars and restaurants that specialize in the heady spirit. 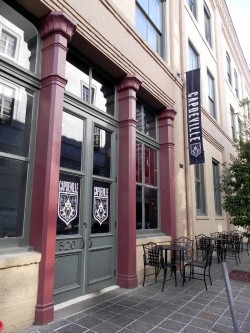 Capdeville
Steps from Lafayette Square in the CBD, Capdeville is the businessman’s gastropub — a perfect spot to hang out after work and grab a bite. Along with an antiquated jukebox that features a wide selection of both classic and contemporary musicians, this downtown tavern also features a good whiskey selection from the ubiquitous Jameson to Kentucky’s Knob Creek and Rebel Yell. There’s even a small batch whiskey from LA1 that’s made in Thibodeaux. So swing by and wash down some Shepherd’s Pie (made with house-smoked lamb) with a couple fingers of Four Roses … you’ll never even miss the green beer. 520 Capdeville St., (504) 371-5161, capdevillenola.com

The Avenue Pub
Though it’s easily one of the best bars in the city (if not the country) for beer, The Avenue Pub on the corner of St. Charles Avenue and Polymnia Street also has a huge selection of whiskey. Open “24-7-365,” the pub constantly attracts both die-hard regulars and visitors from all over the globe. With 54 taps and over 200 bottled beers, you’d think owner/curator Polly Watts would have enough on her hands, but she also keeps a well-stocked bar and that includes a huge selection of whiskey, scotch and rye. From Bushmill’s and Conncannon to Tullamore DEW and Tyrconnell, there’s almost 20 different types … and that’s just the Irish whiskey! The Avenue Pub also offers great bar eats devised by Chef Nathaniel Zimet of Boucherie, sidewalk tables and terrific company. 1732 St. Charles Ave., (504) 586-9243, theavenuepub.com

Kenton’s
Though it’s certainly not Irish, Kenton’s Restaurant on Magazine Street has plenty of whiskey. In fact, the Uptown restaurant and bar offers more than 50 different types from Blade & Bow (made in Kentucky) to Rough Rider (made in New York). Kenton’s menu items are prepared specifically to pair well with American whiskies — dishes like wood-fired oysters and chicken under a brick. The prix fixe lunch even offers a choice of desserts — a scoop of house made ice cream or an ounce of Buffalo Trace. Which would you choose? 5757 Magazine St., (504) 891-1177, kentonsrestaurant.com

Dickie Brennan’s Bourbon House
It says it right there in the name! Dickie Brennan’s Bourbon House has offered one of the most prolific collections of American whiskey at its Bourbon Street bar and restaurant for a little more than 20 years. Along with authentic New Orleans cuisine, Bourbon House offers a veritable cornucopia of different types of bourbons and whiskies — so much so that the eatery is home to the official New Orleans Bourbon Society, which hosts whiskey-inspired dinners, tastings, study halls, cocktail crafting lessons and more. Stop in for a flight of single barrels, ryes or small batches, and see if you don’t want to join up too. 144 Bourbon St., (504) 522-0111, bourbonhouse.com