A new book fosters conversation about gun violence in America. 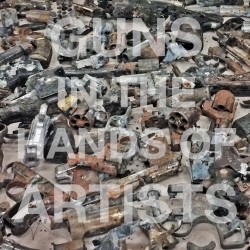 Guns in the Hands of Artists ($35, Inkshares) is an extension of an art exhibition of the same name organized by Ferrara and artist Brian Borrello in 1996 at Ferrara’s gallery in New Orleans. The exhibition featured original works of art made from guns that were removed from the city’s streets. Now, two decades after the initial exhibition, Ferrara has released the book to expose a much wider audience to the art and the message behind it: to end gun violence in America.

The persistence of violent gun crime in New Orleans and across America led Ferrara to reprise the project in 2015 at his gallery. The exhibition then traveled to The Aspen Institute in Colorado; Washington University in St. Louis; Art Basel Miami Beach; Minneapolis with Pillsbury United Communities; and to Washington, D.C. at the New America Foundation and in the Rotunda of the Russel Senate Office Building.

“The driving force behind the book was really an extension of the traveling exhibition that has been presented across the country and to continue to foster the conversation through the lens of art,” Ferrara says. “Because it is not feasible to bring the exhibition to every rural and urban community across the country, the book can serve as a vehicle to continue the conversation on a much more intimate and personal level. By adding the writings and perspectives of national thought leaders on this critically important issue, the aim is to further broaden the dialogue and create moderate, sensible discussion.”

Ferrara hopes that the intimate experience of reading this book — with its beautiful and powerful images, and thought provoking essays — will give readers a deeper insight into the subject of gun violence. “The book can take the conversation into classrooms, policy makers offices and the living rooms of America,” Ferrara says. “The book expands the dialogue into another realm — the realm of reading and thus further understanding of this crisis that faces our nation.” Available at Garden District Bookshop, The Rink, 2727 Prytania St., 504-895-2266, gardendistrictbookshop.com

Thanks to a new partnership with the Arts District, the Loews New Orleans Hotel is offering new Arts District Eye-Opener Art Gallery Strolls on the first Saturday of every month. (So if you missed the April 1 art stroll, be sure to mark your calendar for May 6.)

Starting at 10:30 a.m. at the Swizzle Stick Bar at the Loews New Orleans Hotel, attendees can enjoy a $1 morning eye-opener cocktail from Café Adelaide and the Swizzle Stick Bar, including the Café Adelaide Bloody Mary, a Ramos gin fizz or a brandy milk punch. Arts District director Marcela Correa then will lead art lovers through a guided tour of the Julia Street galleries, such as  Jonathan Ferrara Gallery, Degas Gallery, Martine Chaisson Gallery, LeMieux Galleries and Ariodante Gallery. “Those are just some of the galleries we visit,” Correa says. “We have a total of 18 galleries and generally do about half each month.” This complimentary experience lasts about two hours. It’s a great chance to stretch out your legs, while getting up close and personal with the city’s art scene and learning firsthand from the gallery curators. 300 Poydras St., (504) 522-5988, loewshotels.com/new-orleans
Contemporary Master: An art exhibition by renowned artist Mark Kostabi is now on view at Martin Lawrence Galleries.

Celebrating 40 years of fine art on Royal Street, Martin Lawrence Galleries welcomes Kostabi – Contemporary Master — an exhibition by Mark Kostabi — running through May. The exhibition kicks off with an opening on April 29. From 6-8 p.m., guests will have a rare opportunity to meet the artist while discovering the bold artistry of his work and learning about the symbolism behind his distinctive method. In true New Orleans style, there will of course be entertainment and complimentary refreshments during the evening.

Kostabi, an artist and composer, was born in Los Angeles in 1960 to Estonian immigrants. He was raised in Whittier, California, and he studied drawing and painting at California State University, Fullerton. He moved to New York in 1982 and founded Kostabi World — his large New York studio — in 1988. In the 1990s, his works were widely exhibited throughout the United States, Japan, Germany and Australia. For the past 10 years, he has been dividing his time between New York and Rome. “Why are the figures faceless? It’s a universal language free of racial limitations, and a reflection of society’s fear of individuality,” Kostabi says of his work.

While at the gallery, be sure to check out the collection of rare and sublime artwork — from hundreds of artworks by Andy Warhol, and works by Picasso that include paintings, etchings and linocuts. The gallery is also home to the brilliant sculptures of Erté; the father of Art Deco, Chagall; and some of today’s finest artists such as Liudmila Kondakova, Robert Deyber, Philippe Bertho, Felix Mas, Kerry Hallam, Francois Fressnier, Douglas Hofmann, Takashi Murakami, Rene Lalonde, Anne Faith Nicholls and Ali Golkar, among others. 433 Royal St., (504) 299-9055, martinlawrence.com