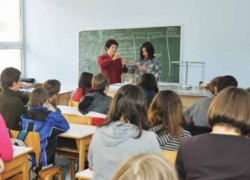 According to the National Center for Learning Disabilities, one in five individuals is impacted by language-based learning disabilities — one of the most common is dyslexia. The University of Missouri recently published a study “The Structure of Working Memory in Young Children and its Relation to Intelligence,” which was funded by the National Institutes of Health, that shows a link between working memory (the small amount of information an individual holds in his or her mind at one time) and how children learn. An example of working memory: If a child is listening to a story, he or she holds onto the beginning sentence or paragraph until the story continues to a point where everything makes sense. Researchers believe that people with language disorders such as dyslexia may have a working memory deficit. Therefore, the link between working memory and how children learn may later help educators uncover new ways to teach children with learning disabilities. One way would be to reduce the amount of information that is given to a child at one time, allowing them to channel their attention onto one task at a time.

Researchers at the University of Missouri plan to continue studying memory and attention, and how they affect language and learning disorders.

According to the Environmental Protection Agency, an estimated 21,000 lung cancer deaths occur each year in the United States as a result of radon exposure. Additionally, radon is the country’s No. 2 cause of lung cancer, behind cigarette smoking, and it’s the No. 1 cause of lung cancer among nonsmokers.

A recent LawnStarter analysis of data release in January from the U.S. Census Bureau shows that nearly 90 percent of homeowners in the New Orleans area have not tested their homes for the presence of radon gas. The bureau’s 2015 American Housing Survey included 25 major metropolitan areas, and, sadly enough, the New Orleans area has the highest amount of homes that haven’t been tested (followed by Houston and Memphis).

According to the National Cancer Institute, radon is an invisible, odorless, tasteless gas that’s released from uranium, thorium and radium found in soil and rocks. It can enter a home through cracks in foundations, floors or walls, and then build up inside the home. You can conduct a radon test yourself, or hire a qualified contractor to do it, but, either way, be sure to test!

The Southern Food and Beverage Museum recently introduced a new spring lineup of cooking classes that include the brand new Taste of Louisiana: Cajun Cuisine — an exploration of the cooking and foodways of Louisiana’s Cajun culture. During each cooking class, Elizabeth (Liz) Williams, SoFAB founder and president, and Jyl Benson, SoFAB culinary programming director, present unique demonstrations in the state-of-the-art Rouses Culinary Innovation Center by Jenn-Air.

The three-course lunch demonstrations offer an in-depth and up-close look into how to create delicious traditional dishes that cannot be found anywhere else in the world. Participants will receive recipes to take home, as well as insider tips to make the dishes easier to prepare at home. The instructors also are happy to provide advice on cooking, dining and local interests. “Here in New Orleans, we are so lucky to have such a strong food culture,” says Maria Muro, publisher of New Orleans Living. “These classes aim to keep that culture alive and well. There truly is no place like home.”

Ticket prices include admission and a guided private tour of the museum led by Williams, and there is a discounted price for SoFAB Members. Be sure to purchase tickets 48 hours in advance (and make any special dietary requests at that time). Classes are running now through June 1. 1504 Oretha Castle Haley Blvd., (504) 267-7490, southernfood.org

78
previous Eating for Health
next Yoga as Therapy