In New Orleans, food acts as a connector. 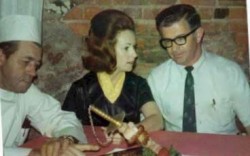 Like any good New Orleanian, my holy trinity of interests involve Mardi Gras, music and food. I understand these interests can vary slightly from person to person — my Paw Paw would have swapped music for Saints and Tulane football — but it is no secret that food is as central to our culture as family in New Orleans.

Many of my Sundays growing up were spent at my Mimi’s round kitchen table, listening to the sounds of my uncles scream conspiracy theories at the television as we watch the Saints lose another five yards. Interspersed with their groans of frustration at our “prodigal son” of a football team were the intoxicating aromas of whatever my Mimi was cooking. Some of my most vivid memories from childhood involve sitting on a stool by her kitchen island and watching mesmerized as she turned something ordinary into something mouth-watering with only a few magical ingredients. When I asked her once why she never looked at a recipe when she cooked, she claimed that, “She didn’t need someone else’s recipe when she had her own.”

Seemed a good enough reason for me.

A single mother to three children during the Great Depression, my great-grandmother could take a can of Coke, some breadcrumbs and a little aluminum foil and make the most delicious and flavorful fried chicken you ever tasted. I was the kid that begged to visit her great-grandmother because I loved to watch her cook and listen to her stories, all with an endless supply of peppermints.

Unbeknownst to me, while listening to stories of childhoods long ago and opinions on current events, I was also cultivating a wide palate. Where else do you eat food that looks like it did when it was alive and phrases like “suck the head and pinch the tail” are commonly heard around the dinner table? It wasn’t until I traveled outside of New Orleans as a young adult that I realized my tolerance level for spice was higher than the average American and food that others may overlook are central to the distinctive flavors of New Orleans cuisine.

As a result of my upbringing, I associate food — from preparation to consumption — as an almost transcendent experience. An apple-flavored Hubig’s pie reminds me of running errands with my Opa while my Oma was at her garden-club meeting, and the smell of grillades and cheese grits cooking immediately conjures up holiday songs in my head. Food is not just a means to an end; it’s truly an experience that can make life richer and fuller (pun intended).

As a mother of two next-generation New Orleans ladies, cultivating a diverse palate is as important to me as making sure they understand that it’s called a neutral ground, not a median. Not only because a picky eater can be a pain to take out to dinner, but because being open to new flavors and foods is a way of immersing yourself in a culture. By limiting your palate, you are limiting yourself to the full experience life has to offer.

It’s not necessary for my girls to love each and every bit of food they try, but tasting it is half the journey. By the time my youngest was even two years old, she enjoyed her first raw oyster. My oldest daughter asks her dad to peel her crawfish for her until she can learn to do it faster — because there’s no better food-adaptation of Darwin’s survival of the fittest than being a slow peeler at a crawfish boil.

Perhaps that is what draws New Orleanians to food and cooking so much — layered in between each step of the perfect gumbo is time to share stories and celebrate the joie de vivre that mirrors our pace of living. It is an experience that I look forward to passing onto my daughters.

232
previous Shift in Perspective
next How Sweet It Is