Smartest Guy In The Room

Chris Chalk, the talented, witty and versatile actor returns to Season 3 of Gotham as Lucius Fox. 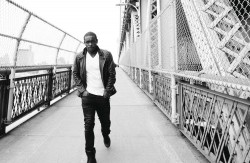 Although Chris Chalk first considered becoming an actor only during his freshman year at the University of North Carolina Greensboro, pursuing an acting career wound up being a wise decision. Over the years, the talented thespian’s resume has grown as he played myriad interesting characters in theater, film and television. He became best known for his remarkable roles as journalist and “News Night” associate producer Gary Cooper in the Emmy-winning HBO series The Newsroom, and as marine-turned-terrorist Tom Walker in Showtime’s Homeland. Now he’s reprising his role on Season 3 of Fox’s Gotham as the sharp and stoic Lucius Fox, an original character in DC Comics’ Batman series. Fox is an integral player in the rescuing of young Bruce Wayne and in the future bigger picture of Wayne Enterprises. Gotham’s mid-season premiere is April 24, and the show will follow Fox as he works as a science expert in the Gotham City Police Department. During the season, Fox is seen on the path to becoming the esteemed inventor of some of Wayne Tech and Batman’s most significant creations, and one of Bruce Wayne’s closet allies.

Fans familiar with the iconic story may know what happens next — Lucius Fox has been portrayed numerous times in multiple media forms, including by Academy Award-winner Morgan Freeman in Christopher Nolan’s The Dark Knight Trilogy film series — but Chalk loves the process of discovering how the characters get there through his work on Gotham, a popular show that has won a Critics’ Choice Television Award for Most Exciting New Series and a Gracie Award for Outstanding Drama. “You never get to hear that story except for the occasional flashback in a graphic novel or some episode,” Chalk says. “We rarely know these people in this time period. The big teaser that’s coming up is we’re seeing the character Edward Nygma in a lot of green, which may or may not hint towards him becoming The Riddler (a supervillain to Batman’s superhero), and I may or may not have a strong hand in him discovering himself. The good thing about the show is that we all have a general idea of where we’re going; the fun is how our awesome writers get us to get there.”

Chalk enjoyed comics while he was growing up. “Yeah, I was into it big time,” he says. “I liked Batman because you have to like Batman, but I was more into Wolverine and The Hulk; there’s something about invulnerability that I really like. And the things that I’ve done before — 12 Years a Slave, Homeland, The Newsroom — have all been pretty serious. Even the plays I’ve done have been about Rwanda or the Congo, so it’s really nice to be in something like Gotham where I can sleep at night!”

Chalk’s other television credits include roles on some of the most popular dramatic series, including Justified, Complications, Law & Order, The Good Wife and Nurse Jackie. A well-rounded talent, Chalk is also proficient in theater and starred in August Wilson’s Fences on Broadway, directed by Kenny Leon, which won a Tony Award for Best Revival of a Play in 2010 and had previously won the 1987 Pulitzer Prize for Drama and the 1987 Tony Award for Best Play. Chalk played alongside Denzel Washington and Viola Davis, who both starred in the recent film version of Fences together with Washington directing. Fences is set in the 1950s and examines race relations and the changing African American experience. “I played Denzel’s son Cory who seems to be a good high school football player, but his dad isn’t interested in him doing football because sports didn’t do anything for him,” Chalk says. The film version earned many accolades and was nominated for four Oscars including Best Picture. “It’s great to see my friends getting such success from a play.”

When Chalk first read the script for 12 Years a Slave, the Academy Award-winning film shot in and around New Orleans in which he played Clemens Ray, he thought it would never get made. “We live in America and Americans don’t want to see movies about slavery whether you be a white-skinned or brown-skinned American; there’s guilt and shame and nobody wants to talk about it and so I was like, ‘There’s no way we’re going to get this movie made,’” Chalk says. “And then when it kept moving forward I was like, ‘I have to be in it! I have to be in it!’ It’s the best thing I ever read! Luckily I met with Francine Maisler and did my audition on tape because director Steve McQueen was out of the country, so I got cast from the tape. Being a movie that didn’t have as much money as some other movies might have to get made and being about what it’s about, slavery in America, made it really fantastic that it won the Oscar. And now, slowly but surely, we’re starting to see that these types of stories not only can garner awards, but people want to see them now and I think we’re going to see more of these true history films because we need them honestly.”

During his time filming 12 Years a Slave, which also starred Chiwetel Ejiofor, Michael Fassbender, Lupita Nyong’o and Brad Pitt, Chalk fell in love with the Crescent City. “New Orleans was fantastic,” Chalk says. “Oh, I love New Orleans! I always tell everybody it’s the nicest city in our country. I feel like it’s the only place where it seems like every human knows the history of the city, and they want to tell you all about it and I think that’s unique because I couldn’t tell you the history of North Carolina — I couldn’t tell you a single thing about North Carolina and I’m from there! But I feel like every time I’m in New Orleans there’s somebody who’s like, ‘Oh! Well let me teach you this other little tidbit of information about this place!’ I find it so welcoming. I wish tourists treated it better. I feel like people go down there; they act crazy; and then they just leave. I’m like, ‘No, no, no — get involved in the history! Get involved in how beautiful the entire city is and how beautiful the people are.’”

“We were filming, I think, during two Mardi Gras. I don’t drink, so I wasn’t drinking, but I went to go take pictures and I was like, ‘Oh, Mardi Gras!’ And somebody said, ‘Come over to this one little jazz bar,’ and I was like ‘Oh, this is what it’s really about!’ If you’re open to those experiences, they’re there. And as far as enjoying the food, I was cleansing not once but both times I filmed there. Yeah, I remember that. I was like, ‘Are you kidding me? Not again!’ I do remember I finally found a juice shop and found some vegetables, but I was like, ‘Okay, just a vegetable that’s not fried! They’d say, ‘It tastes better fried, I guarantee!’ and I’m like, ‘No, I know it tastes better but it’s not good for me!”

So what’s next for Chalk? He will star in Kathryn Bigelow’s new film, currently named Untitled Detroit Project, which explores systematic racism in the city. “It happens during the terrible riots that occurred in Detroit in 1967, and I am a cop that has to deal with it,” Chalk says. “Kathryn Bigelow is an amazing filmmaker, and she is really bringing that truth of racial tension in Detroit to life, so it’ll be another chance to observe ourselves.” Chalk is also starring in the upcoming short film 4 Pounds of Flowers. “We filmed that in Northern California a while ago, and the director, Rob Richert, has become a very good friend of mine,” he says. “It’s a good little piece. I hope it does what he wants it to do.”

Chalk is introspective about his career choices, which helps explain why he has so many standout roles to his credit. “One of the challenges early on in my career was learning when to pass and let things become somebody else’s project,” Chalk says. “Even though I love everything, it’s just not always right for me. I’ve passed on stuff and suggested friends of mine just because they’d be better at it. It has to be true to me. I feel like you can go many ways about doing this job, but I find the people that feel like they have the most control are the ones that really look at each project and make the right decision as opposed to just taking what gets given to them.”

This month, Chalk will carve out time from his career to marry his fiancé, actress Kimberley Dalton Mitchell. “It’s very exciting,” he says. “We’re going back down South to North Carolina where we’re both from, so we’re excited to go back and see our families and friends. We realized that in a way this is a destination wedding because nobody except for our family lives in North Carolina! I was like, ‘Oh yeah! That’s inconvenient for everybody else instead of us doing it in L.A. or New York, but that’s okay, they can handle it.’”

Chalk is an animal lover and is an honorary celebrity co-chair for the Louisiana SPCA’s 39th Annual Howling Success Patron Party & Gala held later this year in New Orleans. “I used to go to this place called Bark N’ Bitches in Los Angeles, and sit and play with the puppies that were looking for homes, and, because I’m allergic to them, I couldn’t bring them home, but there is something very important about having pets and taking care of pets,” Chalk says. “Every time I’m around animals, I’m significantly happier. And there are so many that need homes. My practice would be to go to the shelter to adopt them, because we all know what the other option is and nobody wants that.” fox.com/gotham, @gotham, @chalkchris, laspca.org

302
previous Sterling Constant: A Familiar Face
next Youth Empowerment on the Run