Youth Empowerment on the Run 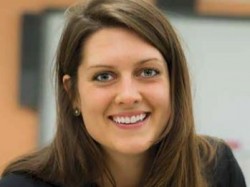 Denali Lander thought she always wanted to be inside a classroom teaching to students. But then she volunteered to get outside and build relationships with kids through an after-school running club. Slowly (and then all at once), her long-range plans most decidedly changed.

“I was struggling with the teacher-student dichotomy that exists and in a lot of ways is necessary for the classroom,” Lander says. “Running is this really equalizing force because everybody is doing this activity side by side. The relationships I’ve been able to build with young people, young adults, their families … it’s community building. I believe so deeply in this model and the city continues to benefit from it.”

Six years after that first practice in St. Bernard Parish, Youth Run NOLA has grown to become an independent non-profit, logging over 25,000 miles and serving over 800 students at 30 schools in St. Bernard, Jefferson and Orleans parishes. With Lander as executive director, the group strives to help overcome the challenging statistics that only 34 percent of Louisiana youth ages 6 to 17 participate in regular vigorous physical activity. More than 20 percent of our state’s youth are obese and 11 percent of our high school students have attempted suicide.

“We want our kids to see running as a metaphor for what else is possible,” Lander says. Beyond the obvious overall health benefits comes a student-reported increase in self-confidence and hope. Lander also sees positive strides in setting and reaching longterm goals, and an increased sense of belonging, school pride and mental happiness too.

A poster child for the program, Sharel Wallgren was a freshman at Chalmette High School when she and Lander met. Wallgren was apprehensive and walked almost the whole practice. In time — like many students who crave community but self-select out of athletics due to the competitive element — Wallgren took to the format like a mosquito to a puddle. She flourished under the consistent support of caring adults. She began adding distance and in no time was advocating for a half-marathon component. She pulled classmates and her younger siblings in to the program and coined the phrase “Youth Run NOLA family.” At 20, she has returned to be a running buddy and consultant (and to run her fifth half marathon with Lander). She’s proven how to keep the program sustainable through community advocacy, Lander says.

In fact, the organization has evolved to add a captain council — a leadership opportunity not unlike student council — where runners help plan events and strategic initiatives for student and family outreach. A family council encourages families to meet and run together. “It’s leadership for themselves, for their health and for their own future,” Lander says.

Longterm, Lander and founders Andre Fiegler and Alex Lebow hope that Youth Run NOLA will reach any child in any of the three parishes who could benefit from the group. In adding schools, they are adding another location where kids are running in their own neighborhoods. And more kids running locally leads to even more kids running locally. And that? It leads to a stronger sense of community. youthrunnola.org
Why NOLA is perfect for this project (besides the good weather): “We have a culture here of being out in the streets together,” Lander says. “Plus there is so much rich cultural diversity in different neighborhoods. It’s something special when people are brought together from pretty different backgrounds and maybe they’ve been raised to think they don’t necessarily get along with certain people. Through this activity, the relationships forming are really a beautiful thing.”

Volunteers are the key to success: “We are only able to do what we do because we have an outpouring of community support,” Lander says. There are 60 teachers acting as volunteer coaches, and, during races, they push to reach a two-to-one adult-to-kid ratio. That takes about 200 volunteers. “There’s high retention rates of volunteers who come time and time again and who are forming strong connections with these kids,” Lander adds. “But we’re always looking for more people to be a part of what we’re doing.”

Layout of a race season: Youth Run NOLA participates in a fall series of 5Ks, winter training for the Rock ‘n’ Roll Half Marathon, a spring 504K fundraiser and the ultimate event to cap off spring: the Crescent City Classic.

Crescent City Classic — that’s a wrap: The mass of 400+ yellow shirts you see at the CCC is likely a Youth Run NOLA runner or volunteer. The race allows Youth Run NOLA runners to enter free of charge and anyone who raises $200 or more for the charity also gets free entry. “It’s a celebratory race,” Lander says. “It’s the end of the season, and for a lot of kids, a 10K is as far as they’re ever going to go.”