Dreams of Becoming a Prima Ballerina 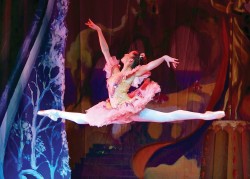 While Isabel Borges’ friends are on their way to math class at Ursuline Academy, Borges is on her way to pointe class. Her former cross country teammates are striding around Audubon Park, while she’s on the Uptown Q train headed toward modern dance.

Other teens are just rolling out of their beds Saturday afternoon by the time Borges is already home icing down her entire body after completing two technique classes and a pas de deux session.

The life of a pre-professional dancer can be more intense than a paid career in many other professions.

When Borges accepted a position at Ballet Academy East’s yearlong professional training program in New York City, she knew she would be making a lot of sacrifices.

“I miss my family and my friends,” she says. “I miss going to normal school just because online school is so hard and you really have to motivate yourself. I miss all the football games where we would go and socialize. But it’s definitely worth it. I have no regrets.”

The 16-year-old started as a student at Giacobbe Academy of Dance in New Orleans at the tender age of 3. She danced the Delta Festival Ballet’s part of Clara in The Nutcracker at 13 years old and two years later was the lead in Waltz of the Flowers, a role typically reserved for professional dancers.

Gymnastics, softball, running and swim team have slowly fallen away as her talent in ballet became obvious. Her two older brothers played sports and no one in her family had ever danced before, but the whole family has gotten behind her.

“I think as I’ve gotten older and more grown up, they’ve seen me improve in ballet and always supported me,” Borges says. “I mean my parents moved me up to New York to pursue my dream. They’re in it — they’re in the game.”

While her father stays home to run the fourth-generation family business (Craig Borges’ New Orleans Seafood Company), her mom makes the most extreme sacrifices, Borges says, moving to New York with her and cooking her nutritious meals that support her good health as a dancer. When she had a stress reaction in her shins in January, her mom bumped up her calcium levels and helped her ice and apply arnica gel for pain relief.

But Borges will be going it alone this summer — just two weeks after her New York program ends — when she heads to California for a summer intensive program with the San Francisco Ballet. As evidence of her virtuoso skills, Borges was additionally accepted to the Paris Opera Ballet company and is waiting to hear from the Royal Ballet in London.

Borges knows she is in love with the most prestigious corps de ballet. She understands how competitive it is as a woman to get a position in their studios let alone their companies. She is humble about her chances but still hopes to be in that number eventually. “There are millions of us that audition and everyone is so good,” she says. “I can’t even say what my chances are, but all I can do is try my hardest and work to be the best I can be when it comes to audition time.”

Last time she ate a juicy NYC burger: Only once, but come on! A girl’s gotta live a little!

Pre-dance ritual: Praying before taking the stage. She and her friends at Giacobbe also do arm and leg shakes, one limb at a time to an eight-count, four-count, two-count and one-count movement, so she has been sticking with that in New York too.

Dream dance job: Principal at American Ballet Theater (or Paris Opera or the Royal Ballet or … )

Favorite day-off activity: Going to a movie with her mom; hanging out on the West Side with friends; shopping; enjoying a rare day together where they don’t have to worry about ballet.

Join ballet; see the world: Borges is excited about her first trip to San Francisco and wonders if Paris or London might not also be in her future. But for now, she says, “New York City I mean, for me, it’s the best place to be. I love it here. It’s a big change from New Orleans. It’s a very fast pace. There are so many more people. It’s not a place for everyone, but I love the independent feel of it. I love everything about it.”