Home CULTURE In the Spirit
CULTURE
IN THIS ISSUE
SPACES
March 30, 2017 Kim Ranjbar 0

Lula Restaurant Distillery helps to revitalize a stretch of St. Charles Avenue in a city where spirits were born. 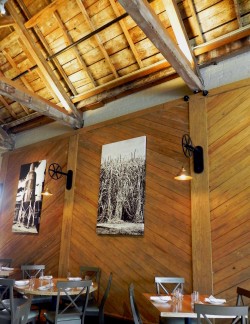 From the exterior, it doesn’t look like much has changed about the building that once served as a showroom for Halpern’s Furniture. It’s when visitors venture inside that they discover the rustic beauty of Lula Restaurant Distillery, and the realized dream of friends and partners Jess Bourgeois and Bear Caffrey. “It’s really very nice to see people’s reactions when they walk in the door and see how big it is, because it’s so unassuming from the outside,” Bourgeois says. “It’s such a beautiful space and great concept, and everybody’s really enjoying it.”

Native son and local chef Bourgeois met Caffrey through mutual friends while vacationing in New Zealand back in 2009. It was then, during a fortnight filled with adventure and revelry, that the two decided to join forces to create the first combined restaurant and distillery in the Gulf South. From learning all they could about operating a successful distillery (including a course at Dry-Fly Distillery in Spokane, Washington) and finding the right structure to house it to challenging local and federal permitting and legislation, it was a long road to reach their seemingly insurmountable goal, but they finally succeeded.

On the eve of this year’s carnival season, amidst the raucous crowds and colorful floats, Lula Restaurant Distillery opened its doors at long last. Featuring Southern-inspired cuisine and cocktails, the 10,000-square-foot space flaunts the building’s original architecture in harmony with top-of-the-line distilling equipment that gleams behind a towering glass wall. The combined efforts of Don Fant, the director of Design at Woodward Design+Build; project architect Frank Lauricella; interior designer Dottie Richard of Richard-Renfo Designs in Baton Rouge; and many others, Lula Restaurant Distillery blossomed into the austere, yet refined space where simplistic, well-crafted cuisine and cocktails color the canvas. 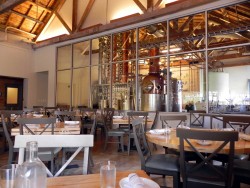 Naturally, the ostentatious display of a working micro-distillery acts as the focal point of the restaurant. The shining brass and stainless steel fermenters, stills, condensers and tanks were custom designed by CARL, a manufacturer of distilling and brewing technologies in Germany. Reminiscent of sci-fi, steampunk metalworks, the distillery equipment is capable of producing 5,000 cases of Lula spirits per year. “It’s like musical instruments standing up there,” Fant says. “They’re brass and colorful; it’s really an interesting view.” Rum, vodka and gin are all distilled from sugar at Lula Sugar Factory, a mill in Belle Rose, Louisiana, which is also where the restaurant got its name.

“Anytime that you’re working with an old building, there’s always opportunities and challenges and you never know, when you start peeling back the layers, what you’re going to find,” Fant says. “The bones of the building were good.” As other visitors might attest, one of the most arresting features of the building is exposed duct work and inverted ceiling trusses that were part of the original structure. “All we did was dust that off,” Bourgeois says. “It was ‘as-is’ … one of the features that really sold us on the space to begin with.” The dining room also features stained and polished concrete floors, a 25-seat bar and wood-topped tables that were actually designed by Halpern’s Furniture.

Aside from the barn-like inverted trusses and dark iron pulley lighting, a wooden wall featured on the right side of the restaurant also lends an agrarian feel to the space. “I’m especially proud of the accent wall,” Bourgeois says. “We have a 30-degree angle wood wall made from re-purposed wood floors in the old meeting room. It took a lot of thought, and I think it came out fantastic.”

Although Bourgeois was heavily involved with the construction and design of the restaurant, his main focus was creating a menu that would not only appeal to the denizens and visitors of New Orleans, but that would pair well with their spirits. “For instance, our boudin-stuffed quail has a honey rum lacquer using our spirits, and one of our mainstay cocktails right now is a Bees Knees, which has honey syrup in it,” Bourgeois says. “We’re just trying, a little bit, to play off of the flavors in each one of the dishes.” Other obvious examples include the Lula rum lacquered Gulf Shrimp with soybean succotash and sugarcane pork skewers grilled with a spiced rum glaze.

Due to Louisiana House Bill 233 passed in 2015, legislation Bourgeois aided in enacting, this type of micro-distillery is not allowed to distribute its product through other outlets. But they can sell their spirits directly to customers who visit the restaurant, either bottled or as a cocktail. “Most of our drinks are traditional sours, which are three ingredients … a citrus component, a sugar component and our spirits,” Bourgeois says. Lula’s bartenders can serve batch drinks straight from a tap, like the cucumber vodka Collins or Planter’s Punch, or mix classics like a French 75 with cava, lemon, cane sugar and Lula Gin, or a Mojito made with muddled lime, mint and cane sugar mixed with Lula Rum and carbonated water.

From concept to completion, it’s been a long road for Lula Restaurant Distillery to become a reality — one with many essential players. “Everybody worked really well together,” Bourgeois says. “And I think the beauty of the space is a testament to that. Typically when you go through a process like this and people are butting heads and not getting along, things don’t turn out the way they should, but I think it’s pretty obvious that everyone worked well together here.” lulanola.com