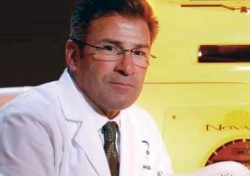 With the advent of the computed tomography (CT) scan, the cellular level positron emission (PET) scan, 3D technology and more, it’s a brave new world. “That’s what makes me come to work,” Dr. Monsour says. “It’s constantly changing and evolving, and that’s what’s so exciting about this field.”

The latest tech toy for Dr. Monsour and his team is TomoTherapy — the only one of its kind in the city. TomoTherapy combines advanced radiation therapy with the accuracy of CT scanning and calculates the appropriate position, pattern and intensity level to deliver powerful radiation to a precise area of a patient’s tumor.

Normal tissue has a certain tolerance for radiation he says, and, before TomoTherapy, some patients would reach a point where the risk to the healthy tissue would require them to stop treatment. A lung cancer he treated recently that would have previously affected 28 percent of a good lung was knocked down to 13 percent on the new machine.

Not every cancer benefits from TomoTherapy. According to Dr. Monsour, typical use would be for more advanced cancers, especially very advanced cases of breast and lung cancers, certain prostate cancers and cancers of the head and neck. Another advantage is for cancers that have spread to a large area. The tumors can be targeted to receive a single field of radiation without potential gaps or over-radiation through overlap.

With technology comes longevity. After decades in the radiation oncology field, Dr. Monsour now sees patients all the time who he knows for a fact would not have survived their cancer just a few years prior. “When I first started doing this, the median survival rate of someone with advanced lung cancer was about eight months,” Dr. Monsour says.

He shares a story of a woman with extremely advanced cancer of the larynx. She couldn’t talk and could barely breathe. She refused to have her larynx removed so Dr. Monsour and his team treated her with radiation therapy.

“A few years out, she has a normal voice, she eats well and she’s as happy as can be,” he says. “Every time I see her, she makes my day.”

Why EJ made the decision to invest in TomoTherapy: “We took some of our most difficult cases to plan and had the people at TomoTherapy plan them for us to see if we could get better results,” Dr. Monsour says. “In every case, there was a definite improvement. We hope it translates into better outcomes … clinically we don’t know the difference yet, but on paper it looks better. That’s not that to say that the other machines aren’t good. We feel very lucky we have the capital and technology to help us in these cases where we didn’t have it before.”
It’s the people: “I’m fortunate enough to work with a really, really good group of people,” Dr. Monsour says. “Our department’s been here since 1991 — I only know of one person who’s left in that time.

Everybody loves to work here; it’s like a family. If we can’t get rid of the cancer, we can make people feel better, and try to be as happy and upbeat as possible … it’s a tough, tough thing to go through … .” Every year for Christmas, the practice pools their money for a patient going through financial hardship. And a big group of them — led by Dr. Monsour in a lime green jumpsuit — love to attend the Lympho-Maniac Cancer Benefit, the annual disco gala fundraiser for local cancer causes.
On curing cancer: “I don’t honestly think we’ll ever cure cancer, but I think we’ll get better at treating it on an individual basis with targeted therapies,” Dr. Monsour says. “Radiation is getting more and more technologically advanced, [and] more and more site specific. Over the coming decades, we’re only going to continue to get better.”
On retiring: “I have grandchildren now, so [I won’t] keep doing this until I drop dead,” he says. “I have a family life I really cherish, and that’s the most important thing to me. It’s not going to be anytime soon though, I can promise you that. I still think I’m young.”