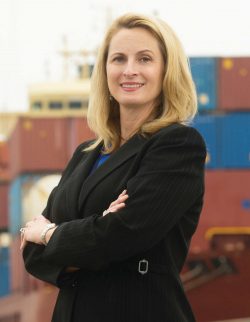 Making her way up the public service sector ladder, Port of New Orleans President and CEO Brandy Christian has rubbed shoulders with and worked alongside many of the titans of the industry. Throughout the journey, she felt fortunate to make and remain close with multiple mentors.

And yet … her biggest hero is her 11-year-old daughter.

“She is such an inspiration to me,” Christian says. “She has a great way of tackling challenges head on. She’s strong, smart, has a lot of energy and she really makes me laugh.”

In fact, leaving behind a 15-year career with the Port of San Diego to come to New Orleans was in no small part a family decision. One big benefit of the work environment here was a greatly improved work-life balance. She said she knew it was the right choice when her daughter commented during dinner one night that she was so glad her mom didn’t get phone calls from work every night anymore.

“It really hit home that she pays attention,” Christian says. “I’m glad that she sees me enjoy my job and knows that I also prioritize my family.”

Christian is the first female in the president’s office over the port’s 120-year history, and one of the few women leading ports in the United States. She oversees almost 300 employees, $61 million in revenues and over $200 million in capital projects at a port that the Journal of Commerce called the nation’s “fastest growing import and export port.” But none of those statistics cause her anxiety. She’s confident she can meet challenges head-on as she works to help grow the port’s cargo, cruise and industrial real estate portfolios.

She shares her motto: Be so good, you can’t be ignored. “Women — and all under-represented professionals — need genuine, challenging opportunities to grow and showcase their talents,” she says. “That means working hard, taking chances, and being willing to learn and adapt.” portno.com

’Bout the Boats: Christian’s love of maritime was an accidental discovery. She was a consultant for KPMG corporate finance overseeing public sector accounts when she decided to take a job at the Port of San Diego to gain experience with public agency work. Almost immediately she was completely captivated. She made her way through nearly every department culminating with Vice President of Strategy and Business Development where she succeeded in bringing Disney Cruise Lines to the city.

Roadmap for the Seaways: Christian says her new job itself is inherently motivating with diverse challenges. “We are in the process of updating our strategic master plan and I am looking forward to the result, which will serve as a roadmap for growth over the next 20 years,” she says. “My goals are to expand our economic impact, and build stronger trade, economic development, civic and community partnerships so all stakeholders value the port’s contributions to our quality of life in Louisiana.”

Building a trophy case: Christian serves as the Cruise Committee Chair for the American Association of Port Authorities and has joined the University of New Orleans Transportation Institute Advisory Board, and the Green Marine Board of Directors. In her short time here, she was awarded Top Female Achiever 2016 by New Orleans Magazine and collected an Alumna of the Year Award from the University of Arizona in 2015.

Those many mentors: Christian’s mother gracefully balanced a career with raising her and her sister. “She encouraged hard work and competence,” Christian says. “She was much more supportive of my taking chances, even if I failed sometimes, than for not trying. Also, two special women she worked with at the Port of San Diego were instrumental in shaping her approach to management and problem solving: One taught her to creatively look for win-win situations; the other was skilled at process and strategies.

And two other heroes too: Christian says she can’t possibly express how fortunate she feels as a working mom that her husband’s parents moved to New Orleans with them. “They have been a big part of my daughter’s life since she was born, and they are there for her after school until Frank and I get home. That stability and trust lets me focus on my job during the day.” She can’t imagine a better transition, she says. “Moving to New Orleans has been life-changing in so many positive ways.”