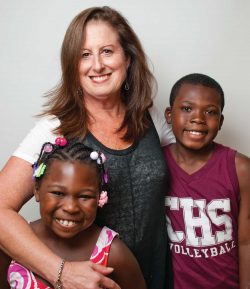 Like so many stories of fortitude and success in our city, Jackie Silverman’s begins with, “It was right after Katrina … ”
In sheer gratitude for being one of the few spared damage, she reached out to others. She quickly realized that her neighbors in the Jewish community were doing just fine.

“I wanted to do something bigger … go to a community that really needed me,” Silverman says. Her son brought her to a make-shift women and children’s shelter in the Upper 9th Ward where she saw conditions she couldn’t have imagined existing. “I had no idea that people could live so dismally. The women and children were packed in this cramped camelback home with holes in the floor, one working bathroom and no kitchen. They were sleeping on [U.S. Army] cots without pillows.”

Eleven years and two locations later, The New Orleans Women & Children’s Shelter has grown to allow for 26 families, up to 110 individuals, each family with their own room. The volunteer staff has morphed into a paid staff of nearly 20, including a cook and an Executive Director, Dawn Bradley-Fletcher. The shelter has case management, an employment program, an education wing, an after-school program with tutors, and, last year, the Silvermans dedicated a new play yard and basketball court in memory of their son Jonathan.

“From the beginning I always said, ‘No one will ever pay a dime to stay here,’” Silverman says. But that doesn’t mean the residents are at a resort. There are responsibilities and chores, and everyone signs a contract and is expected to behave as a family would. It’s not for everyone, Silverman says, but it has been gratifying to see firm friendships last beyond the experience.

As a child, Silverman watched her parents — who didn’t have much money — give back to the community and open their doors to people in need. Her father’s motto was, “You’re no better than anyone else and no one is better than you.” Silverman and her husband,Dan, have always opened their home too, so the shelter is just an extension of that hospitality.

“Seeing these women who inspire me every day … and the kids running around, that’s what melts Dan’s heart,” she says. “It’s what drives us. The shelter is so much a part of our lives, and my children’s and grandchildren’s lives, that I don’t know where you could separate my family from the shelter.”

She says the entire staff — a loving, compassionate crew of longtime employees who she often has to force to go home — feels the exact same way. The New Orleans Women & Children’s Shelter, 2020 S. Liberty St., (504) 522-9340, nowcs.org

Open-door policy: “We make no judgement on anyone who comes through our door,” Silverman says. “We treat every person with dignity and respect, help them help themselves get their lives back on track. It’s incredible watching these women have dreams they can enact for the first time in their lives.” Some 85 percent of residents move out to their own apartment or home.

In the long run: “We’re trying really hard to have enough money to continue this,” Silverman says. “To go beyond Dan and I. You know, we’re old. You guys are young. Hopefully there will be some young people coming along that want to carry on and do this work. Younger generations think more about giving back than making money. I think there’s great hope for the future.”

And it’s all because: “The need is there,” Silverman says. “Poverty is so great in New Orleans that there is going to be homelessness and the need for women and children to get off the street and have a safe environment. That’s paramount and we’re it.” Silverman says those who believe homelessness is improving don’t see all the people sleeping in cars and abandoned buildings, and that potential HUD cuts can only make it worse.

Stories of hope: Silverman gets letters all the time from people who have moved past a horrible time and gone on to get their GEDs, earn nursing licenses, even a master’s degree. It makes it all worth it to know the shelter helped change the trajectory of their lives.
One woman with her three grandchildren had nowhere to turn after her husband was unable to return from a trip to Africa to bury his mother. “She stayed with us for a number of months trying to get back on her feet,” Silverman says. “Her grandchildren were incredible. They were quite traumatized, but she was an amazing mother to them. She was able to move out, get an apartment, get the kids in stable schools and now … she’s a member of our board!”
Attention Volunteers
Whether tutoring for the children, throwing parties on the weekend or hosting a benefit fundraiser, Silverman says there are so many volunteer opportunities. “You almost can’t even think of all the possibilities,” Silverman says. “If it weren’t for volunteers, donors and local foundations, we couldn’t do all we have accomplished.”