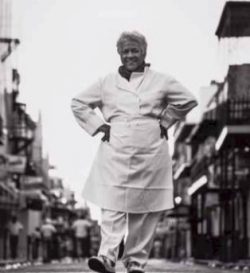 Now on view through Oct. 1, a new exhibition at the New Orleans Museum of Art — entitled New at NOMA: Recent Acquisitions in Modern and Contemporary Art — celebrates the life of beloved chef, civil rights activist and art collector Leah Chase (aka the “Queen of Creole Cuisine”). To honor Chase on her 90th birthday, NOMA created a dedicated fund (that was funded by members of the New Orleans community) to acquire a group of new works by emerging and underrepresented contemporary artists that honor Chase’s lifelong commitment to art and culture of the South, and a strong legacy of political activism and engagement.

For those who don’t know: Chase is the recipient of countless awards and honors for both her culinary achievements and her efforts during the Civil Rights Movement. She has run the kitchen at New Orleans’ famous Dooky Chase’s Restaurant since 1946, where patrons can feast on world-class soul food and a celebrated personal collection of African-American art.

“Leah Chase believes that art should be relatable, accessible and uplifting,” says Susan Taylor, Montine Daniel Freeman Director at NOMA. “We’re thrilled to showcase these acquisitions in her name in NOMA’s Frederick R. Weisman Gallery for Louisiana Art and Helis Gallery, and, in doing so, celebrate Leah’s long-standing commitment to living artists and their work.” 1 Collins Diboll Cirle, (504) 658-4100, noma.org
A Storied Past: A new exhibition at the Historic New Orleans Collection showcases the infamous New Orleans Storyville district.

Just last month, the Historic New Orleans Collection opened a new exhibition that revives some of the sights and sounds Storyville — a century after the closing of the notorious red-light district. Storyville: Madams and Music is on view through Dec. 2 and features a diverse selection of photographs, maps, postcards, contemporary objects, videos, recordings and the infamous blue books (pocket-sized directories of the district). Throughout the exhibition, visitors experience the rise and fall of the neighborhood that helped shape the reputation of New Orleans that still, in ways, exists today.

Storyville was a legally sanctioned prostitution district located just north of the French Quarter with brothels, saloons and beer halls. The area was portrayed as a luxurious playground for affluent white men, with attractions that included music, dance, spirits and sex. Of course, several pioneering musicians like Manuel “Fess” Manetta, Jelly Roll Morton and Joe “King” Oliver were instrumental in the Storyville scene, experimenting with new styles and techniques in the district. Instruments, oral histories and sheet music from these musicians, paired with recordings of popular music and dance steps, further showcase the diversity of the district’s music.

A new exhibition with Where Y’Art at The Old No. 77 Hotel & Chandlery, (Somebody Got) Soul, Soul, Soul: Set One, celebrates the city’s beautiful musical traditions with works from 19 local artists selected by DJ Soul Sister. The rotating exhibition is now on view through the end of July and also includes a small show on display at the hotel, The Gospel According to New Orleans (a series of acrylic paintings by Where Y’Art artist Cheryl Anne Grace, depicting iconic New Orleans musicians).

Meanwhile, The Gospel According to New Orleans shines a spotlight on iconic New Orleans musicians and their role in dubbing the city the birthplace of jazz. Grace’s work captures the rich history, people and vibrancy of New Orleans, celebrating the inspiration of a city and its musical traditions. 535 Tchoupitoulas St., (504) 527-5271, old77hotel.com/explore-hotel/yart-77.