Coach Kenny Farrell of the New Orleans Jesters has the city’s soccer future in his hands. 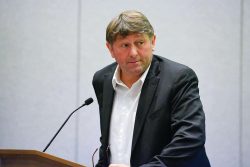 Nationally, American soccer has long ceased being an emerging sport; it has arrived and it has gained in popularity for some time.

Born and bred in Europe as the original football, it has taken startling leaps and bounds in the United States since the U.S. National Team first appeared on the global scene by finishing third at the 1930 World Cup. Today, the United States features the MLS (Major League Soccer), the NASL (North American Soccer League), the USL (United Soccer League), the NPSL (National Premier Soccer League) and the USL PDL (Premier Development League), not to mention numerous additional adult and youth clubs and teams in civic leagues around the country. The growth in American soccer can be seen in the expansion of these leagues in a short period of time: MLS has grown from 10 teams to 22 since 1993; the USL has grown from 16 teams to 30 teams since 2010; the NPSL has grown from six teams in 2003 to 96 teams today; and the PDL has grown from 27 teams in 1995 to 72 teams today. There are another 34 teams in three different regional and elite leagues, and another 94 club leagues as well as nearly 300,000 youth playing in civic leagues around the country. In short, American soccer’s footprint, as measured by its professional and amateur participation and viewership, has become enormous.

Here in New Orleans, one of the nation’s premier sports cities, soccer has also made a footprint — and it has been gradually expanding parallel with the national scene. The New Orleans Jesters have been squarely enfolded in the NPSL’s South Region since 2012 and have made Pan-American Stadium in City Park the city’s epicenter for soccer since 2009. Meanwhile, Jesters Head Coach Kenny Farrell, who has been coaching in the United States for 25 years, has been plying the soccer furrows of New Orleans since 2003 with the advent of the New Orleans Shell Shockers in the PDL, guiding the franchise’s transition through the crisis of Hurricane Katrina, and the ultimate transformation into the Jesters. Along the way, he has been a quiet force in the development of local youth soccer and coaching up several young team members to eventual careers in major league soccer. One day ultimately, Coach Farrell will likely be remembered as the father of professional soccer in New Orleans. But as for now, he continues to develop the team for the 2017 season. The question entering the year is whether the Jesters will be able to burst back into the later stages of the playoffs, something the team has not done since 2014.

The 2016 Jesters finished third in the NPSL Southeast (West) Conference at 4-4-2. Much of the season was spent jostling with rivals Memphis City FC and the Knoxville Force for playoff seeding behind powerhouse Chattanooga FC (who finished far ahead of the pack at 9-0-1). Ultimately the season ended versus Memphis with a disappointing 3-0 loss in the conference semifinal playoff game. As is so often the case in soccer, the final may have been affected by a single goal earlier in the season when the Jesters lost a home tilt versus Memphis 2-1, possibly costing them home seeding in that playoff game. In the semifinal match, the teams faced off again, this time under extreme harsh conditions as the heat soared to near or over 100 degrees on the field. The game was a microcosm of seasons past rather than 2016 as the Jesters, led by Rossel Cacho and Ryan Reid up front and Ralph Lee Price in the backfield, managed to gain opportunities on the opponents’ side of the field but failed to take advantage of several chances. On the other side, unforced errors — like allowing a corner kick that turned into a set piece goal and slacking on defense with under a minute left in the half, permitting an almost unchallenged goal — resulted in an insurmountable 2-0 halftime deficit. In 2016, the Jesters were in every game, so in that respect the playoff finale was an aberration, but, as the team enters 2017, it will need to find the leadership that will help it make better on-field decisions in critical times in critical match ups.

From a team perspective overall, the Jesters improved in 2016, especially reaching the playoffs and winning the inaugural Louisiana Cup. Organizationally, the franchise clearly comprehends that a key to local growth is involvement in youth soccer training and camps, especially its NOLA Soccer Academy. As Coach Farrell himself stated prior to the 2017 Academy, “Most soccer clubs in the U.S. have good intentions but are seriously lacking in the development of young players. … When you think about it here in the U.S., with all of the players we have playing the game, we have not produced one world-class field player. … Our philosophy focuses on educating the players and moving them past being just a powerful athlete. The true development of our players is measured through their technical ability, tactical awareness and athletic capability. My ultimate goal is to one day have our first team lineup filled with 100% percent local players and to win an NPSL national championship. That is why we start with them so young; we are not rushing them to go win trophies, we are patiently creating outstanding and accomplished soccer players.” The city of New Orleans should take note of what is a truly ambitious soccer program rooted in its environs, seeking to advance what is already recognized as one of the nation’s richest athletic talent pools in a sport that is at once not only global but also in keeping with its historical international mission.