Yats Got His Tongue

Benny Grunch didn’t set out to make a local Christmas classic. In fact, he admits his song “The 12 Yats of Christmas” started out as little more than an odd 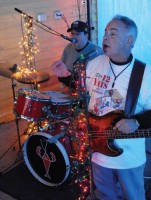 request. He and his band, Benny Grunch and the Bunch, were playing a gig in Baton Rouge when someone asked him to sing “a New Orleans version of ‘The 12 Days of Christmas.’”

“I was just thinking of it during the gig without even trying. And it came to me. But [the lyrics] came to me in that double entendre, numerical order … ‘a dozen Manuel’s tamales … 11 Schweggman’s bags.”

He didn’t play the song that night but kept coming up with lyrics over several days. The first (and last) line stumped him. New Orleans really isn’t much of a place to find a partridge in pear tree so he needed a local equivalent.

“I was at a gig at the Riverwalk and screamed down to one of the guys in the band: ‘What’s some’n New Orleans that rhymes with pawtridge,’” Grunch says in his thick New Orleans accent. “And, boy, he said it in a second: ‘Crawfish!’”

So Grunch came up with a last line, “And a crawfish they caught in Metairie.” But he kept thinking, Metairie? Nah, that’s too cosmopolitan for these Yats. “And I was going to a gig downtown and got behind an Arabi Cab. And there it was.”

Thus was born a Crescent City Christmas classic that hits local radio airwaves every holiday season. For those who don’t know the words—and it’s hard to imagine any New Orleanian who hasn’t heard the song at least once—the full list goes something like this: “On the twelfth day of Christmas my true love gave to me: a Dozen Manuel’s Tamales, Eleven Schweggman Bags, Tenneco Chalmette Refinery, Lower Ninth Ward, Ate By’ya Mama’s, Seventeenth Street Canal, Six Pack of Dixie, Fried Onion Rings, Before Ya Drive Me Nuts, Three French breads, Tujaque’s Recipe and a Crawfish They Caught in Arabi.”

It’s such a catchy ditty dripping in local “culcha” that even the most strident Scrooge will find himself humming along when it’s on the radio. Grunch, 63, can’t believe it’s been almost two decades since the song first came out.

“My [CD] manufacturers in Nashville have told me that I’ve gotten more mileage out of one song than most country stars get out of a career. It’s 18 years, and I’m riding on that one song. But you know, it’s been a good ride,” Grunch says. “I’ve had a lot of friends say after the first couple of years, ‘You know, go do something else. You’ve beat that horse enough.’ But every year it sells better and better. I think my best year was 2005. After the flood, everybody wanted a piece of New Orleans. I think I sold about 22,000 CDs in maybe six or seven weeks.

Grunch has a new “12 Yats of Christmas” album out this year that’s a double CD. Side “K” is filled with pre–Hurricane Katrina music such as “Santa and His Reindeer Used to Live Right Here,” “O Little Town of Destrehan,” “Christmas in Chalmette,” “I Could See the Aluminum Tree Through the Pictcha Winda” and two versions of “Ain’t Dere No More,” a song about cherished New Orleans businesses and institutions that have faded into history.

The second CD is filled with post-Katrina tunes like “I’m Dreaming of a White Trailer,” “Over by Your Mama’n Nem (Katrina Anniversary Mix)” and “Temporarily Ain’t Dere No More (A Tale of Two Cities—Lakeview and St. Bernard).” The CD contains two new songs, “Santa an His Reindeer Got Their Modular Home” and “Evacuation Day,” a parody of the city’s Gustav exodus to the tune of the Four Freshmen’s “Graduation Day.”

Like Santa Claus, Grunch is always busy in December. He’ll be playing gigs around town to support the album, which he says is available in stores from the east to the west coast, meaning “Gulfport to LaPlace.” Grunch is playing at Harrah’s Miracle on Fulton Street on December 21 and at area Barnes & Noble bookstores throughout the month.

Grunch says he doubts he’ll ever run out of things to parody in a city so rich with tradition and eccentricity like New Orleans. But even the king of Yat parodies admits that his precious muse may be a dying breed. Could Yats be on the path to extinction as the city grows and modernizes with the rest of the nation?

“The whole country is consolidating. Yeah. It is very endangered. If you went to Dallas, Houston or Atlanta 25 or 30 years ago, boy, they had a Texas or Southern accent,” he says. “Not anymore. Atlanta doesn’t have that big Georgia accent anymore. Yeah, New Orleans is losing it fast … But I’m holdin’ on to as much of it as I can.”

Grunch points to his custom “Ain’t Dere No More” T-shirt that lists at least 600 New Orleans bars, restaurants and institutions that are no longer around, like K&B Drugstores, Schweggman’s grocery and McKenzie’s Pastry Shoppes. So, speaking of institutions, which does he miss most:

McKenzie’s or K&B? “Even though everybody misses McKenzie’s, I was a K&B guy. K&B malts and hamburgers.”
Best fast food: Popeye’s or Bud’s Broiler? Bud’s Broiler. My favorite is Store #2 (on City Park Avenue), even though they haven’t come back yet. And I miss the fried pies.”
What’s your favorite Christmas song? Other than mine? Ray Stevens’ “Santa Clause Is Watching You.” Of mine, there are a couple. “The Elves Finally Rap” and “It Was the Nite Before Rite Before the Nite Before Christmas.”
Now that we’re in the holiday shopping season, which department store do you miss most, D.H. Holmes or Maison Blanche? “I like MB because all the kids like Mr. Bingle. And you know what my favorite part about Mr. Bingle was? How dirty he would be at the end of the year. He would be positively dusty brownish, blackish gray. He was just like snow!”

1.73K
previous Splendor in the Sky
next Full Speed Ahead