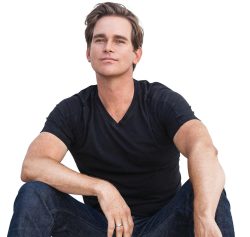 Talented and handsome actor Phillip P. Keene struck a chord with viewers of TNT’s popular American television police procedural The Closer with his portrayal of tech-savvy reserve officer Buzz Watson, the Civilian Surveillance Coordinator in the Major Crimes Division of the Los Angeles Police Department. After seven seasons, The Closer came to a close Aug. 13, 2012. Its successor spin-off show, Major Crimes, made its premiere on TNT following The Closer finale, featuring many of the same cast members (including Keene, who reprised his role as Buzz). Thanks to superb acting, writing and directing, Major Crimes has wowed fans with its witty, emotional depth, and the series has become long-running. Keene is currently filming Season 6 of Major Crimes and is looking forward to having Buzz continue to crack some of the highest priority and sensitive murders, and other criminal cases in Los Angeles, along with an elite squad of detectives, when the hit crime drama returns in September.

“We know that our audience is smart and that they tune in because they want a smart story,” Keene says. “Oftentimes, it’s not just about the murders; it’s about the characters and the relationships. I love that our shows are not all scary and dramatic. Some of them are funny; some are silly; and some are really dark. It’s a nice variety to step into.” Major Crimes airs in other parts of the world, including the United Kingdom and Australia. “We’re even in Uzbekistan if you can believe that,” Keene says. “And we’ve been pulled into syndication in two different markets in the United States.”

Keen’s character Buzz is an optimistic reserve officer with the LAPD who provides technical expertise and critical electronic surveillance to help solve cases. “His optimism is one of the things I like about playing the character,” Keene says. “I find it challenging sometimes because he’s seen people do a lot of nasty things, yet he still believes in the good of mankind. I find that refreshing about his character in that despite all the darkness he’s surrounded by on a constant basis, he still finds the light and he brings that forth for everyone else to see as well. Now he’s studying to be a reserve detective. I’ve had the pleasure of meeting many reserve officers; they do it not for the glory, not for the pay, because they only earn a dollar a year. You feel the need to help create some justice in this world, and maintain a sense of law and order, and give back to a community.”

Buzz’s backstory revolves around the murders of his father and uncle after a hockey game, while stopped at an ATM. “To wake up in the morning at age 11 and find out your father and uncle are gone is pretty shocking,” Keene says. “I think he felt a little guilt about it because he and his sister made a big fuss about going to the game, so his dad tried to make good and buy souvenirs on the way home.” The case was cold until the end of season five, when Buzz discovers who the killers are. “One guy is already in prison but the other guy has totally turned his life around, so Buzz is conflicted about that,” Keene says. “He’s married with two kids, very similar in ages to Buzz’s character and his sister when this guy killed their father, so I end up having to destroy their family by taking away their dad. I think he’s come to terms with it; this was the impetus for Buzz to become a police officer, and to find out who did it and bring them to justice.”

Keene has been passionate about acting since childhood, and he was involved in theater during middle school and high school. After working odd jobs after graduation, he became a flight attendant for Pan American World Airways for four years and loved his career. “I always draw a comparison to my job now and that job, and it really is a family,” Keene says. “It was the people that made a difference, not just the airplanes and the food. The company was very forward-thinking, and I was enamored with the founders’ desire to bring the world closer together — and the ideal that the more we know about each other, the less likely we were to hurt each other. That’s kind of boiling it down, but I love that! I started collecting Pan Am matchbooks and advertisements, and my collection has grown to about 3,500 pieces.”

Keene now serves as the Director of Communications for the board of the Pan Am Museum Foundation. “We now have a museum at the Cradle of Aviation Museum on Long Island, New York, and we had our opening gala last year in December, and we’re having another one in November, so things are moving along,” Keene says. “It’s all about preserving the history and educating the public about the achievements of this company. We’re also partnering with local schools in the New York area that are involved in their STEM program, especially in neighborhoods where there’s not a lot of money and not much focus on higher education. The kids who are involved in these programs have an 80 percent graduation rate, and 90 percent of those students go on to a four-year university.”

After working for Pan Am, Keene, a native of Los Angeles, double majored in history and art history at UCLA. “I graduated in 2004 at the ripe old age of 30-something,” Keene says. “I took some acting classes, but my main focus was getting through school. I got my feet wet doing student films and background work for Entourage, The D.A. and a couple of other shows. And this opportunity came along to do The Closer, and I jumped at it. It was basically handed to me by a friend and I said, ‘Yes! Please! Thank you very much! How much do I have to pay you?’ And here I am, still!”

Being married to James Duff, the creator of The Closer and Major Crimes, makes Keene keenly aware of the need to keep his personal life separate from his professional life. “There’s work and then there’s home,” Keene says. “If James is on a phone call to another actor or the network, I leave the room. When I’m on set, if something’s going on, I keep that to myself. Sometimes James will say, ‘Why can’t you tell me such and such is happening?’ Because that’s not the kind of relationship I want with my cast mates. You have to be trustworthy and maintain your credibility or no one will want to work with you.”

TNT’s The Closer and Major Crimes have spanned more than 13 seasons combined, and, naturally, the cast and crew have become tight-knit. Keene is best friends with Raymond Cruz — who plays Detective Julio Sanchez on Major Crimes, skilled at understanding the intricacies of gang warfare in Los Angeles and known for being intimidating to suspects, and who’s also famous for his recurring role as the psychopathic and violent drug lord Tuco Salamanca on AMC’s crime drama Breaking Bad and its spin-off Better Call Saul. “Raymond was my best man at my wedding,” Keene says. “Can you imagine Tuco or even Sanchez from my show as my best man? He is so incredibly nice; he and I are like brothers. I had a blowout on the freeway, and he was the first person I called. He’s that kind of guy.”

Interestingly, Cruz is helping Keene restore a 1955 Chevy Bel Air that has special ties to New Orleans. “My husband was adopted and was actually born in New Orleans,” Keene says. “He was there for three months before the Baptist Baby Home called his prospective parents to come meet him, so they borrowed what was going to be James’ grandmother’s brand new car, a 1955 Chevy Bel Air, and drove it from Dallas to New Orleans to pick him up. His cousin gave me the car and Raymond and I, and our friend Matt, have worked on it for a few years. I’m going to give it to James once we’re done. I want to get a personalized license plate that says Orphan, because the car was abandoned for a while. It had hornets nests and holes; the thing should’ve been crunched up and thrown away, but, because of its history, I wanted to bring it back to life.”

The cast and crew of Major Crimes are huge supporters of The Sunshine Kids Foundation, a charitable organization for children undergoing cancer treatment. “There’s a special event we do for them,” Keene says. “They stay at a Hollywood hotel and Chief Beck, the Chief of Police, deputizes them, and the police air patrol gives them a nice helicopter flyover. They get in the cop cars, and scream through Hollywood with lights and sirens on with all the streets shut down. They come to the studio, and we give them a huge welcome, have brunch, watch part of the show; we go to the beach and they’re forgetting for a while that they’re sick. Some are missing an eye or a leg or have had something horrible happen to them, and they’re smiling, laughing and having a good time. They get to live their lives.” There’s also a Major Crimes Cookbook — that features a mushroom soup recipe from Keene, who loves to cook— and 100 percent of the proceeds benefit The Sunshine Kids. Keene and others from Major Crimes also work closely with The Covenant House, and Duff started a successful writing program last year for the homeless youth it serves.

In 1988, Keene was in New Orleans briefly and wants to come back. “Well, I’d have to eat my way through all of the wonderful restaurants in New Orleans first of all,” he says. “And I love architecture, so it would be fun for me to take a historical tour of the city to really soak in what’s going on as far as buildings, and rehabs and stuff like that.” Keene’s altruistic spirit has extended to animals in the New Orleans Metro area and beyond; he is an honorary celebrity co-chair for the Louisiana SPCA’s 2017 Howling Success Patron Party & Gala being held this fall.

“I’d like to do whatever I can to help animals,” Keene says. “Our last two dogs were rescues. We had a total of three at one point: a German shepherd who weighed 90 pounds; a beagle/shepherd mix who weighed 75 pounds — I don’t know how that happens, must have been a party of some kind; and then My Little Girl was a 130-pound Rhodesian ridgeback/Rottweiler mix. She looked like a manatee when she’d lie down! At the vet’s office, she’d sit on the chair next to me and put her head behind my back, and I’d think, ‘Sweetie, they can still see you!’” tntdrama.com, thepanammuseum.org, sunshinekids.org, laspca.org