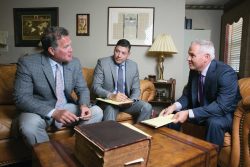 Fresh out of Loyola Law School, Leo Palazzo was trying his first civil jury case — homeless man badly injured in substandard housing provided to local day laborers. It was a case no one wanted to touch. Stepping out on faith and putting up $90,000 of his own money, Palazzo felt sure he could prevail.

“We tried it before one of the most conservative juries in the state,” he says. “They not only awarded him a significant amount, they got out of the jury box and hugged him.”

That case set the tone for a legal career fighting for those in need. “It really opened my eyes to the fact that we’re all the same,” he says. “We’re all humans. Somebody needs to stand up and help people who can’t help themselves.”

With 25 years of experience and his two legal associates, Palazzo continues to set himself and his firm apart from the competition by combining the practice of personal injury and criminal defense law to best utilize their trial skills and their experience navigating the legal system. “If you’re truly a trial lawyer, you embrace cases dealing with somebody’s livelihood, health and freedom because those are the most important cases in the world,” he says.

Palazzo says his legal team is also unique because he, Jason Markey and Mario Arteaga, Jr., live out their faith and embrace clients like family. “We have to use our God-given gifts to help those who have been injured or who have made a mistake, and, with our help, we can help change their lives,” he says. “We have to be a voice for the voiceless.”

As for the reputation of personal injury lawyers, Palazzo says there are a lot of misconceptions. “When you’re dealing with someone’s liberty or livelihood, it’s not just ‘one call that’s all,’” he says. “It’s hard work. It’s a battle because you have an army of well-financed people against you. Insurance companies are the wealthiest in the world, so it’s David versus Goliath over here. A lot of people don’t [go to trial] because you’ve got to be willing to put it all on the line.”
The Legal Team at Palazzo Law Firm
With the Palazzo Law Firm, you don’t just get one attorney — you get a team of attorneys. Palazzo says they roundtable every case and take on each one like they’re preparing for trial, regardless of whether they end up in court. That’s why it was critical for him when he added Jason Markey and Mario Arteaga, Jr., that they share his values and his tenacity for winning.

Coming from a large defense firm, Markey had a great perspective of how insurers think. “Jason saw a definite difference helping others rather than defending insurance corporations,” Palazzo says. “He’s done tremendously well. The clients love him. He’s a hard worker and he cares about his clients. One of the things we try to instill over here, is we’re not afraid of hugging people. You’d be amazed how many people we hug … let me tell you something: That’s priceless.”

Markey agrees. “I’ve probably had more meetings at my clients’ kitchen tables than in our conference room,” he says. “It’s like a Sunday-dinner atmosphere. We talk, have a cup of coffee, ask ‘how are you feeling?’ It’s the first thing we want to know. It’s how we’ve built our relationships and our reputation.”

As for Arteaga, his law degree is only part of the picture. He’s a Marine Corps veteran and “the most disciplined person I know,” says Palazzo. He also has three educational degrees, was a former Orleans Assistant District Attorney and is currently a reserve deputy with the Plaquemines Parish Sheriff’s Office. Arteaga’s education, experience and his fluency in Spanish brings unique assets to the firm. ”He doesn’t know how to fail,” Palazzo says. “It’s a telltale sign that I got a winner.”

Arteaga sees his clients as family, “And I want my family protected,” he says. He’s also set his sights on his church’s prison ministry to get more involved with youth and help change lives at an early age.

From the smallest traffic ticket, to the multimillion-dollar wrongful death awards, the attorneys at Palazzo Law Firm feel they have been blessed. “Each and every one of these cases makes an impact on our lives,” Palazzo says. “We hate to lose; we fight to win. If we can make a difference in somebody’s life, it makes a difference in our lives.”