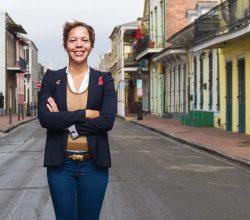 On a break from boarding school as a teen in Saint Lucia, Nina Compton whipped up some canapés and punch and delivered them to her eager family outside on the veranda. She doesn’t really remember what she made, just how her family reacted.

“Just to be there cooking and entertaining and spending time with my family … seeing how happy they were made me so happy,” she says.

It was an early, emotional moment along a rapid-fire road to her highly heralded culinary success.

Now,  Compère Lapin, the restaurant on Tchoupitoulas Street that Compton runs (along with her husband, Larry Miller), is turning two years old, and to say it’s been a whirlwind is a bit like saying Hurricane Katrina was, well, just a whirlwind.

From Miami’s rising star and fan-favorite runner-up on Top Chef in 2014, to inspiring the first-ever Restaurant of the Year designation from The Times Picayune, Compton most recently made the shortlist for the 2017 James Beard Foundation award in the Best Chef: South division. She was in good company with fellow locals Slade Rushing from Brennan’s and the winner, Rebecca Wilcomb from Herbsaint.

“The week before the awards ceremony, it was kind of building up,” she says. “I was nervous and excited. You never know what’s going to happen … but just to be in the community is a win in itself.”

For Compton, transplanting to New Orleans was two parts desire and one part fate. After Top Chef ended, she was bombarded with restaurant offers all over the country. But she didn’t jump until she got a phone call offering her the new restaurant space at the Old No. 77 Hotel & Chandlery in New Orleans. She had long relished the energy of the city and says the culture here is like nothing else. “When I first saw the space, it was just an empty shell, but I walked in, and felt it right away,” she says.

Compton named Compère Lapin for a mischievous rabbit in a Caribbean folktale but designed the menu with locals in mind — local flavor, local produce and enough variety that locals can pop in several nights per week and pick something different according to their mood. That’s how she prefers to eat as well.

“If I’m looking for something comforting that really speaks to me and going back home, I love the curried goat and gnocchi,” she says. “But if I want to go nice and light, I love the marinated shrimp and roasted jalapeños … it’s cool, refreshing and spicy with lots of flavor.” For dessert, she says you can’t go wrong with the roasted banana zeppole with rum caramel sauce — the almost-beignet meets almost-bananas-foster.

She also focuses on simple, straight-forward presentation — not over-saucing or masking flavor, she says, but “just making the ingredients sing for themselves.”

Compton isn’t letting the excitement and prestige of the James Beard Foundation nomination distract her from her mission. While always looking to have a little fun with the menu, she plans to push her team forward and stay diligent. “The biggest thing for us is our consistency, and I think that’s why we’ve been doing so well,” she says. “What makes it successful and worthwhile is having people who are proud to be part of the team and proud of where they work.” comperelapin.com

In the kitchen with mama: Compton’s mother (and grandmother) taught her to cook, but her mom also gave her a good grilling when she said she wanted to go to culinary school. “She asked me, ‘Are you sure you want to be a chef? It’s a lot of stress, long hours and a hot kitchen,’” Compton says. (She was right, of course, but Compton was willing.)

Why Italian will always be an influence: “Everybody can relate to Italian food — it’s comforting, whether it’s some kind of pasta or some kind of sauce,” she says. “I want food to be nostalgic for people. I want them to say, ‘Oh my gosh! I’ve had this before!’ but do it in a fun, playful way.”

On loving the Top Chef experience: “I went in with an ‘I want to win this thing’ mentality, but, as the challenges went on, I looked at it more as, ‘I’m never going to get this chance again.’ So with each challenge, I just wanted to have fun with it. I became more creative as a chef. I fell in love with it again.”

But who’s counting? Beyond the James Beard Foundation recognition, Compton’s chef skills have propelled the restaurant to notable lists like the Zagat’s 10 Hottest Restaurants; Huffington Post’s Best Restaurants in the World; and 10 Best from U.S. Today, among others.

You should know: “When you have your own restaurant, it’s something very personal to you,” Compton says. “That’s you; it’s you on the plate. You’re putting in 15 hours every single day making sure everything is perfect. Sometimes you doubt yourself.

You have to be your biggest cheerleader. It’s mentally and physically grueling, and people lose sight of that.”

But in the oh-so occasional spare time: Compton plays tennis, goes horseback riding, relaxes with her husband, plays with her two dogs and — you guessed it — goes out to eat.