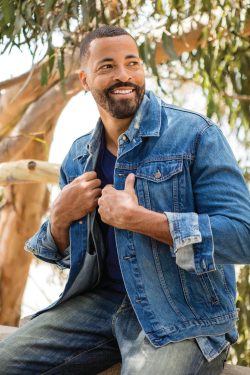 Timon Kyle Durrett’s body of work is impressive. The attractive and charismatic actor has garnered noteworthy roles in television and film such as Like Mike, Single Ladies, Castle, 72 Hours and Barbershop: The Next Cut. Now, Durrett has found an incredibly sweet spot on Queen Sugar, the alluring dramatic series on the Oprah Winfrey Network that was created, directed and produced by visionary filmmaker Ava DuVernay (with Winfrey also serving as co-executive producer).

Based on Natalie Baszile’s novel Queen Sugar, the series follows the lives of three previously estranged siblings who are now dealing with their family’s 800-acre sugarcane farm after the death of their father. Durrett portrays Davis West, a superstar basketball player married to one of the siblings, Charley Bordelon West (played by Dawn-Lyen Gardner), a savvy woman and manager of her husband’s career who leaves their posh home in Los Angeles, taking their teenage son Micah with her, so she can run the farm in the heart of Louisiana. A 16-episode Season 2 of Queen Sugar recently kicked off with a two-night premiere June 20 and 21.

“Season 1 of Queen Sugar was pretty much an exposé into Davis West’s life and who he really has been according to the story for the past three or so years,” says Durrett about his scandal-plagued character and the ramifications of his actions on his marriage. “Things really went down, and Davis’ involvement with a certain young lady was exposed.

Then around mid-season it was revealed that even after everything was going on, there were other elements to the story that Davis failed to disclose that came to light. In Season 2, Davis is still trying to mend things with his reputation, his career, his family, his son and whatever relationship that can be salvaged or not with Charley. His big castle came tumbling down, and, brick by brick, he’s trying to put it all back together. He has certain redeeming qualities he didn’t have in Season 1, so look out for that, and look at who this guy really is.”

Davis experiences a sort of culture shock on Queen Sugar going from L.A. to Louisiana, while his wife deals with the sugar mill, and so has Durrett himself. “It’s a totally different world for my character,” Durrett says. “And for me, it’s actually kind of real. Before Queen Sugar, I’d never spent this much time in New Orleans. The food is different; the culture is different; the dialect is different; the weather during the summer is definitely different; and it’s an adjustment that lends to the realness of the world of Davis West and informs my character. I’ve lived in four major cities in the United States, but New Orleans is by far the most different — the architecture, the festivals. It’s friendly and fun. I’ve never been in a city where pretty much all the food is delicious.”

Filming for Queen Sugar takes place in multiple locations in and around the New Orleans metro area. “We’re at a soundstage in Metairie, and our soundstage last year was in LaPlace,” Durrett says. “We still shoot in Edgard, Vacherie, the Business District in New Orleans and the Ninth Ward.” And the feedback Durrett receives regarding the dynamic contemporary drama is positively glowing, especially from the New Orleanians he encounters.

“People really love it!” Durrett says. “Queen Sugar is artistically delicious, entertaining, educational, robust and profound. It has this gravity that draws you in, and, to me, it’s an expression of that thing that people have been wanting for so long. There’s just something magical and special about it, and I’m not just saying that because I’m on it.
And in New Orleans, people always express how grateful they are that the show represents their city, the people, the culture and the different universal issues, whether political or what have you. They’re very attached to the show and have an affinity for it because they see themselves in it. It’s like when someone cooks for you; they want you to enjoy their food, and, when you do, it makes them feel good about it. And that’s how I feel. Even though I play a more contentious, less desirable character, they express how much they appreciate how the show makes them feel. People say, ‘Even though you made me mad, we love what you guys do!’ They’re emotionally engaged, and, if you can’t stand my character, then that means that I’ve done my job. I am fully engaged in everything about this show. I love it!”

Like Season 1, an all-female directorial team handpicked by DuVernay, including legendary filmmaker Julie Dash, is at the helm for Season 2 of Queen Sugar. “There’s a lot of immense ‘girl power’ as they call it going on in the industry, and finally a lot of the creativity, experience, talent and drive that these women have been disallowed to show is no longer suppressed in many instances now, and they are kicking butt,” Durrett says. “I see things from a man’s perspective, and to have an entire female directorial team helps me as an actor look at things with a more level point of view. I’m not just seeing it from my side or from Davis’ side. I like that component of femininity that balances out the masculine energy that can have a lot of ego or macho type of mentalities. It’s refreshing.”

Not surprisingly, Queen Sugar won the 2017 NAACP Image Award for Outstanding Drama Series. “That was one of my dreams come true,” Durrett says. “To be up on that stage and be part of an award-winning show in our first season after going through so many hardships in my life was incredible. I can’t put it in words — it was one of the best feelings I’ve ever had in my life.

In addition to Queen Sugar, Durrett’s first film job also involved Winfrey, who had worked with DuVernay on the movie Selma. “I told my mother I wanted to be on television, but we had no clue about the process,” Durrett says. “It was 1993, I believe, and my mother heard on the radio that if you wanted to be on television to come on down and audition for a major television movie called There are No Children Here starring Oprah Winfrey. I went down and I booked it. When I got on the set, I knew it was what I wanted to do. That’s when the bug bit me, and the rest is history. I was so excited! I told my mom, ‘They picked me! I’m going to be on TV!’ I didn’t care if I didn’t have a line. It was my first time being on a television screen that wasn’t made for home video. And now it’s come full circle, and I’m right back with Auntie Oprah — that’s what I call her!”

Number six in a family of eight children, Durrett grew up in Chicago’s South Side, where he flourished in art as a child. “I’ve been able to work in different mediums — oil, pastels, pencil and ink, woodworks, stuff like that for a long time, and that’s just sort of my natural gift,” he says. He was drawn to action movies at a young age as well. “I love Bourne Identity and that whole franchise with Matt Damon, First Blood and Rambo, The Terminator, The Matrix, Avatar — movies where they’re so out there with fantastic things or have this big grandiose idea of something. I live for stuff like that!”

Durrett graduated Cum Laude in Communications from Alcorn State University in Mississippi, where he played basketball. “I was modeling and acting before college,” says Durrett, who maintains his chiseled 6-foot-5-inch physique through exercise. “I went to Alcorn in 1994, and I’d go home and do fashion shows, print work, commercials and body double work. [Durrett has done commercial work for Nike with Michael Jordan and has body doubled for Scottie Pippen.] I moved back to Chicago after graduation, and, after my mother passed away, I moved to L.A. After nine and a half months, I booked a supporting role on a major motion picture, Like Mike, and the bug bit me again!”

A gifted writer, Durrett released his self-help book, Who the Hell Do I Think I Am: A Brief and Candid Assessment of Oneself, in 2014. “One of my mantras is that there’s one person in this world that you can’t lie to — and that is yourself,” Durrett says. “I had to be open and honest with myself. I saw some things I could improve or get rid of altogether. I started working on it, and writing things down, and the writing got a little longer, so I wanted to write a book! It’s available on amazon.com and a quick read, but it’s an in-depth analysis of one’s self.”

Durrett enjoys sampling the delicacies New Orleans offers and loves cooking for friends. “I like crawfish étouffée. I was never a big fan of oysters, but then I had grilled oysters — incredible! I have some soulful dishes that my friends like me to make: Southern fried chicken, sweet and spicy collard greens, garlic seafood mashed potatoes and banana apple blueberry cornbread — oh yeah! It’s some delicious stuff! My parents both were good cooks, and I’ve always had this curiosity, like ‘What’s she doing?’ And my mom was always like, ‘Get back! Get away from the sink! Get away from the stove!’ I got a little bit of both their styles. My dad was a bit more about presentation. But my mom wasn’t. She was like, ‘I’m cooking for 10 people and you can’t eat it out the pot!’”

His love for animals earned Durrett a role as an honorary celebrity co-chair for the Louisiana SPCA’s 2017 Howling Success Patron Party & Gala, taking place Nov. 10 at the Hyatt Regency New Orleans. “Growing up, we always had dogs, and I had a cat, fish, birds, lizards and snakes,” Durrett says. “I love animals, especially domesticated animals. It’s a shame that we have stray animals, and they should be protected. I do not condone the mistreatment of those animals. I feel bad for them because they don’t have anywhere to go. Animals have emotions too.” oprah.com, la-spca.org