A local businessman promotes a new system to combat viruses and bacteria. 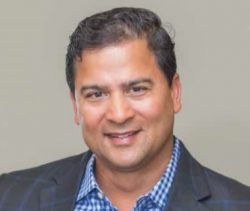 When John Alvendia first heard about the concept of a hydrogen peroxide biodefense system, he was intrigued by the unique concept of killing viruses and bacteria by creating a continuous flow of dry hydrogen peroxide to treat the air and surrounding surfaces. He was also impressed by the reputation of the system’s creator.

The Synexis Dry Hydrogen Peroxide system was developed by a West Point graduate who was the chairman of the chemistry department there in the ’90s. After the attacks on Sept. 11, 2001, that professor, James Lee, was the country’s top consultant for anti-terrorism biodefense in the private sector. During the subsequent anthrax threat, Lee responded by creating the DHP technology to help the government fight bioterrorism.

For Alvendia, it was a no-brainer. Anything that could knock out anthrax could surely handle infectious germs like staph infection, e-coli and strep. He was gratified after researching the product that the long list of organisms Synexis could combat also included certain flu viruses and even many molds.

“As soon as I heard about the genius who invented the system, and how effective the process was, I was onboard,” Alvendia says. “I knew it was going to be a game-changer for medical, sports and public facilities. It was great to get in on the ground level.”

Through his sales and consulting company, Online Systems, Inc., Alvendia has always kept his focus on education and technology. “I have a background in engineering and a fixation on new technology,” he says. “The Synexis is a simple process with a wickedly effective output. And it’s green … completely safe, delivering far less hydrogen peroxide than what we breathe out every time we exhale.”

While Synexis is a worldwide company, Alvendia has chosen to keep his focus on the New Orleans market. He says there is a wealth of opportunity among our sports powerhouses and in public gathering places. But of special interest is our medical community, a system he praises for its big-city capabilities but small-town individualized patient care.

In the United States, over the past few decades as more bacteria have grown drug-resistant, hospitals are struggling with hospital-acquired infections. More people than ever go in for a procedure and end up with infections that can be life-threatening. Alvendia says estimates place the financial burden at $30 million for hospitals. “The Synexis system can mitigate that risk and reduce the cost to cover these types of infections,” he says. “In clinical studies, the system brings the bacterial loads down to near-zero.”

Meanwhile, in the locker room: Staph and flu cause big problems for athletes. “Locker rooms and workout facilities are thoroughly [germ-ridden],” Alvendia says. “Do a web search of ‘staph infection’ and ‘professional athlete.’ Using DHP technology can literally save careers.” Five major league baseball teams have installed the Synexis system.

And the chickens want in on it too: Large poultry operations are notorious microbial breeding grounds, and, therefore, perfect candidates for the deployment of DHP technology. DHP allows these operations to reduce or cease antibiotics and harmful chemicals like formaldehyde.

Where else?: One of the world’s largest bottling companies just signed a deal with Synexis for increasing sterility at bottling plants. DHP can be deployed in buildings with mold. “But the biggest need for technology like this is for the people who have the most to lose,” Alvendia says. “Hospitals are losing tons of money due to bacterial infections. This is saving lives and killing all the super bugs out there.” (504) 287-9636, synexis.com

Wonder Tech: How the Synexis DHP System Works
Like your own immune system, the Synexis Biodefense System can act as a building’s immune system.
The patented process creates small amounts of dry hydrogen peroxide gas from natural humidity and oxygen that transforms into a near-ideal gas state. The dry hydrogen peroxide then cycles continuously through a facility’s air system to disrupt a wide spectrum of microbial threats.

“What makes it so unique is that it kills bacteria 24/7 once it’s deployed in the air,” Alvendia says. “It’s safe to be used where personnel and patients are present. That’s what sets it apart from other sterilization processes. Currently, areas with bacterial exposure have to be shut down and closed off during the disinfection phase.”

In controlled, accredited lab testing, microbial contaminants such as C.Diff, E.coli and flu were reduced in Synexis DHP-treated environments with efficacy ranging between 95 and 99.9 percent.

1.89K
previous Life Is Sweet
next On the Stage