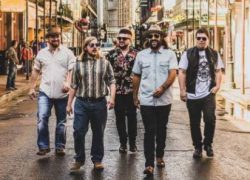 The New Orleans Antiques Forum — a premier event for antiques collectors and enthusiasts — will take place this year at The Historic New Orleans Collection’s Williams Research Center Aug. 3-6. In Their Hands: Creative Masters of Southern Decorative Arts will examine the artistry and influence of the individuals who crafted the decorative arts collected in the South.

The four-day event will feature 12 presentations on topics such as Newcomb pottery, furniture maker John Henry Belter, German silversmiths in New Orleans and the portraitist Jacques Amans. Optional events include a pre-conference bus tour to Baton Rouge (Aug. 3) that will cover Perique, Bagatelle Plantation and Magnolia Mound Plantation and a Sunday jazz brunch at Arnaud’s Restaurant (Aug. 6). Tom Savage, director of museum affairs at Winterthur Museum, Garden and Library, will return as moderator, and the distinguished panel of speakers includes decorative arts experts affiliated with the San Antonio Museum of Art, Sotheby’s New York, Ceramics in America, THNOC and more. Registration is now open, and packages start at $100. hnoc.org/antiques

Southern Soul: Local band Delta Revelry gets its groove on — and you will too!

The popular local band previously known as Will Vance & the Kinfolk, recently rebranded with a new name, new singles and new tour dates. Now known as Delta Revelry — a name a name that embodies the soul of the band’s lively music, while also paying homage to each of the band member’s roots along the Mississippi River Delta — this American rock quintet certainly has changes in the air. However, fans can still expect the soaring guitars, crooning vocals, spirited organs and thumping rhythms—all rooted in classic rock ’n’ roll, soul and blues—that form the foundation of the band’s sound.

Delta Revelry consists of Will Vance (on lead vocals), John Mark Gray (on lead guitar), Tyler Davis (on bass), Garland Hoover (on drums) and Mark Farmer (who joined the band in Aug. 2016, on keys). “Delta Revelry is definitely a rock-n-roll band,” Vance says. “We are heavily influenced by classic rock, blues and soul. We like to categorize ourselves as ‘rock-n-soul.’ What makes us different is the modern twist we put on these influences.”

According to Farmer, it is the city of New Orleans itself that provides inspiration. “This city is an eccentric cultural utopia that oozes talent,” Farmer says. “That, in and of itself, drives us to constantly challenge ourselves to be better than we were yesterday. This city is a living creature that provides its own beat and pulse. The history and foundation of the music and vibes here has been the root of our soulful sound.”

Some of their most popular songs include “Cold Blooded,” “Running Downhill” and “When I’m Dead.” However, these guys aren’t stopping there. They plan to release four new singles each month, recorded at the locally based Farmer’s Jam Studios. The first of which, “Dawg,” was released in April. “Turn Me Loose” followed with a release in May; and “Ain’t Coming Back” and “Desperate Man” are soon to be released. A crowdfunding campaign to get back in the studio to record their self-titled 12-song album to release in 2018 will also kick off soon.

“Luckily we’re a group that can get in a room and make music while feeding off of a mood, feeling, emotion or even out of the competition of one-upping each other,” Gray says. “Sometimes it starts with a lyric, sometimes a guitar riff or even just a groovy drumbeat starts a whirlwind of creativity for us.”

Look for shows across Southeast Louisiana as Delta Revelry adds new summer dates to its tour calendar in support of these new releases. Currently scheduled upcoming shows include Aug. 25 at 7 p.m. (at Hot August Nights in Hammond, La.); and Sept. 30 at 7 p.m. (at Fall Fest in Ponchatoula). deltarevelry.com

Local Lore: A New Orleans novel shines inside and out.

The Beauty Fools ($36, Foolosophy Media), a Southern Baroque tale about learning to fly — and flying too high — takes place in the magical city that is the Big Easy. The story follows its protagonists through celebration and collapse pre-Hurricane Katrina, set against the backdrop of the Sazerac Bar at The Roosevelt New Orleans, the Victorian Lounge at the Columns Hotel, Commander’s Palace, Orpheum Theater, and other iconic spots around town. It ends tragically during Carnival in a Royal Street courtyard, but that’s getting ahead of things.

Written by the reclusive Kid Author, this project began in 2009 when the manuscript arrived at editor Tim Weeks’ New Orleans residence. Weeks spent five years editing the story, and during that time, New Orleans artist Lala Rascic worked with Weeks to create 14 illustrations of scenes involving the characters. Award-winning Hamper Studio in Croatia conceived and created the book design, which is shaped and proportioned as an oversized box of tarot cards, placed in an embossed and gold foiled box. In addition to the book, each box contains a small deck of colored illustrations from the book, expanding on the tarot card theme.