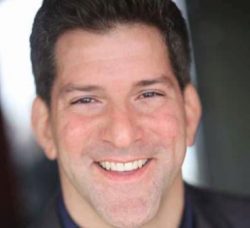 Maybe you’ve seen him in Treme. Or at Jim Fitzmorris’ Theatre on St. Claude in a recent local production of The Birds. Or maybe you’re one of the 1.4 million people who have clicked on his viral You Tube testimonial for Sunlight Contractors that he intended as an inside joke for the company’s owner. (Who knew an angel from heaven could come bearing spray foam?)

So maybe you know Craig Leydecker, the actor. But acting is only something Leydecker does in his spare time when he’s not working as a personal injury attorney.

“I look for the right opportunities in acting,” he says. “Something that will work with my schedule and be a good acting challenge. I’m always trying to find that balance. Well, it isn’t really balance, but balance for me … I like action.”

Acting isn’t just pure hobby, he says. Working on the craft also has improved his communication skills as a lawyer. While there is a role to play when fighting for a client, he doesn’t perform it without authenticity.

“What works best is when people get real, whether it’s law or acting,” Leydecker says. “It’s about credibility. Do you have knowledge? Do you make sense? Are you being yourself and can people can tell you’re truthful? If a client or a judge or jury relate to me as a person and can tell I’m knowledgeable, they’ll probably trust me. If they also trust the client, then things usually go well. That’s really what it’s about.”

Making that connection and building relationships are the keys to his success, Leydecker says. He puts a lot of energy in to listening.

“I’m not a therapist but a listener,” he says. “The client comes to you in physical pain, frustrated, not knowing how the case will resolve. Listening can help you get to know them, get the facts and help build trust. Then they can be ready to listen. Real communication begins.”

Almost 50 years ago, Leydecker’s father, Gerald Leydecker, started practicing as one of the early personal injury specialists in the area. His colleagues nicknamed him Loophole Leydecker for his knack in finding ways to win the case. Craig says his father has provided invaluable guidance throughout his career. In addition, Leydecker’s brother, James, is also a personal injury attorney in Midcity. James speaks fluent Spanish, expanding the Leydecker name into the Latin community.

Lately, Craig Leydecker’s caseload has ramped up so much he had to take a break from TV and movie acting so he could be more available for clients. “I’m working longer days,” he says. “I find myself really digging in. But it’s okay. I like it. I like the feeling of doing well and to see somebody happy after they had a difficult time. When you’ve gotten them the money they deserve, it makes the hard work worth it.”

And then there’s Craig Leydecker, the singer: Music and theater electives at LSU opened Leydecker’s eyes to the arts. After law school at Loyola University, he took music classes there. He sang in a band, performed in the New Orleans Opera Chorus and also dabbled in musical theater. Though it has been years, he and fellow singer, Frank Von Hoven, have been brewing up plans for a Rat Pack-style band called The Sazeracs.

In the stars: Leydecker needs both the law and art. “I’m a Gemini,” he says. “There really may be something to that. Both sides of my brain need to work.”

Why the quick check isn’t best: “A quick check is not a good answer for most cases unless someone has very minor injuries,” he says. “If you don’t understand what will happen with future suffering, how can you recommend a quick check?” Instead, he helps clients get fully evaluated and get care they need, allowing doctors a chance to understand past history and assess future losses.

That call out of the blue: Nothing makes Leydecker happier than a phone call from an old client just to say hello. “Others times a new client may say, ‘My friend said I could trust you and you‘d take care of me.’ When a past client trusts me enough to send someone they care about to me, it’s a beautiful thing!”

309
previous Germ Warfare
next A Plan to Grow UNO