Nicoya Hogan and her husband have something of a wing habit. 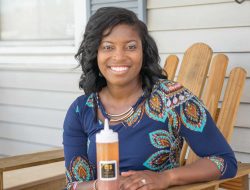 It used to be that two or three nights per week, they would meander over to The Bulldog, Down the Hatch, Blue Oak or Bayou Hot Wings to get their spicy chicken fix. But now that Hogan has created a secret sauce all her own, the best wing joint they know is the Hogan kitchen.

Big Sunday gatherings to watch the New Orleans Saints were the Hogan’s biggest inspiration. “I usually do all the cooking, and we have some good spreads,” she says. “But the wings are the highlight.” She used to blend prepared sauces but decided more recently she was going to create from scratch. “I like spice, but I like flavor; it needs more than heat,” she says.

After a few trial-and-error sample batches, her friends and family (“my taste testers”) were hooked. They started begging for leftover sauce or even a jar of their own to take home. Her husband encouraged her to see what would happen if she canned it and tried to sell it. Right away she sold more than she could have imagined and CO’s Wing Sauce & Marinade was born.

Her first two flavor experiments — buffalo and mango habanero — went over so well, she added jerk flavor as a third and is pondering a lemon pepper addition. All of her ingredients are fresh and local (except the mangoes of course, but she gets those at Ideal Market), and she’s proud to say there are no artificial ingredients.

Hogan didn’t see sauce chef in her future in 2012 when she left New Orleans for law school at Texas Southern University. But at the same time, she didn’t see chaining herself to a desk either. After getting her law degree, she tried firm work but over a year later quit and started tending bar at Toups Meatery.

“I’m not really sure I want to practice law,” she says. “I want to see where life is taking me now. I like my life the way it is … I like to leave work at work and not wake up to 1,000 requests before I even walk in to the office. I found that when I was working at the firm, you get so in to it, it can wear you out. I don’t like how I felt like that. I know you can make copious amounts of money, but when can you enjoy it? I have a pretty good life now, and I’m not rich.” etsy.com/shop/COsByBelle

It takes work: The research skills Hogan honed in law school fuel the research it has taken to build her business. In her web browsing history you’ll find searches on sauce recipes, safe canning, UPC codes, selling on Etsy, how to get shelf space at Whole Foods and (after her husband was grilling and wanted to quickly sauce the meat), safe squeeze bottles. She’s also pounding the pavement marketing to local bars and lounges as well as selling her wings and sauce at local festivals.

Why CO’s? Hogan’s husband, Steven, calls her “Co,” a nickname for Nicoya. She made the “O” in “CO’s” capitalized to represent her grandmother, Ophelia, an inspiration to her in the kitchen and in her life.
Not just chicken wings: While eating light before going on a cruise, the Hogans discovered the sauce is great on salmon, rice and salads.

Bartending suits Hogan: Tending bar feeds Hogan’s entertainer-at-heart spirit: “I like making things for people,” she says. “I like talking to people … regulars become like family.” Bartending is also good practice for her business as she thrives when she is mixing things and creating new flavors.

Her friends and family say: “I take care of everyone,” she says. “I make sure everyone’s good. My family is what drives me. I always want them to be happy. I don’t want to disappoint them; I want to make them proud.” Hogan comes from a huge family, and she is raising three stepchildren with her “amazing husband” who is a good friend and “supportive in all aspects.”

In the near future: Hogan says she would be just fine with her sauce company putting her out of the bartending business. “Ideally I’d like to see the sauce take on some national notoriety,” she says. “I’m not a trained chef. I can’t put myself in the same category with the others [in this issue]. But I do know what I like. My taste buds have never steered me wrong.”