Spaces & Design – The Country Club: What’s In a Name?

A neighborhood restaurant in Bywater measures up to its name, yet still retains its flair for whimsy and frivolity after a year-long renovation. 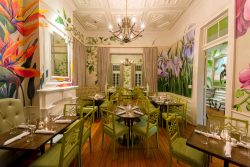 Tucked away into what was once a remote corner of Bywater, The Country Club has been a secret neighborhood gem since 1977. Built more than 130 years ago, this Italianate Raised Center Hall Cottage was originally the family home for Anne McAvoy and George B. Canby, but it has seen several incarnations since — from a boarding house to a dispatch hub for a local taxi service. After more than a century of alterations, add ons, adjacent property acquisitions, installations and Hurricane Katrina, The Country Club had ventured far from its original splendor.

In an effort to elevate the overall feel of the establishment and offer a more sophisticated dining experience, The Country Club went through a year-long renovation managed by the capable and creative team at Ferrand Design. “We based our design off of the historical expectations of a house in that style,” says interior designer Lauren Ferrand. “We really just added the design details that were missing that would honor the history of the house.” Traditional architectural details, like custom crown molding, millwork, plaster ceiling medallions and wainscoting, were added throughout the interior — most of it created onsite by skilled, local carpenter Andrew Goodrow of Guild Carpentry.

Though The Country Club’s name has largely been tongue-in-cheek, the ladies at Ferrand Design took the moniker’s teasing mimicry and ran with it. “If you were to tell someone, ‘Hey, let’s go to The Country Club,’ I think most people’s expectations would be a golf course or a card lounge, maybe a smoking room,” Ferrand says. “We wanted to embody that as well.” This ambiance is especially noticeable in the bar and lounge area where Goodrow created a walnut coffered ceiling, millwork, wainscoting and a custom wine cabinet to match the existing walnut bar. They also added custom round-back chairs and bar stools.

Keeping in mind the historical elements and country club aesthetic, Ferrand and her business partner Ashley Bowman were also intent to retain the festive and whimsical aura that has been an integral part of The Country Club since its inception. Local artist Cindy Mathis was tapped to give each space in the club its own signature style through fanciful murals in vibrant colors. “The double parlor features grass-woven wall coverings with painted floral patterns,” Ferrand says. “Instead of the expected, small-scale pattern, we wanted to be a little bit more whimsical, so we said let’s do Jurassic-sized flowers.” A pandemonium of bright green Quaker parrots, a tropical bird oft seen all over the Greater New Orleans area, adorns the walls of the small parlor. “Their overall personality is representative of The Country Club,” Ferrand says. “They’re cute; they have a lot of fun; and they’re social.” A kaleidoscope of butterflies created by Mathis also grace the walls of the bar lounge, plus several portraits by famed Louis St. Lewis, including a “master of the house” portrait in the main entry hall.

Possibly one of the largest design hurdles involved the unisex bathrooms, but, through much trial and debate, it has become one of the club’s most talked about spaces. With the inclusion of a room that was formerly used for billiards, the designers converted the space into men’s and women’s restrooms, including a unisex/ADA restroom in the back. “We were able to provide much more spacious restroom facilities that were clean and well-designed,” Bowman says. “We imported beautiful, handcrafted Stafford tiles for the walls, and, in the women’s restroom, there is a marble, floating-island double vanity with a waterfall edge topped by a custom brass mirror.” The women’s restroom also features a unique bubble window with flying bubbles and changing colors backed by a female, mermaid-like image. “It was something the owner had his eye on and he had to do some strong convincing for us to get it done, but, at the end of the day, everyone just loved it,” Bowman says. “It’s a fun, quirky little feature that is definitely in keeping with The Country Club culture — it’s fabulous.”

To complement the new design, The Country Club engaged talented chef Chris Barbato, formerly chef de cuisine at Commander’s Palace, to head the kitchen and offer a more refined menu. Local and visiting food fanatics can now enjoy dishes like clams and chorizo or Bourbon lacquered quail in the dining room, or snack on fish tacos and elote poolside. “We added a new outdoor grill kitchen and upgraded all of our lounge chairs,” says Bert McComas, general manager of the restaurant. “And our new assistant general manager, Stephen Burgess, is overseeing the bar program.”

The entire staff at The Country Club is also to be commended for their perseverance and stamina, considering the club stayed open during the entire year-long renovation. “They put on big smiles and dealt with the dust and debris, not knowing which door customers would be coming through on any given day,” McComas says. “They rolled with the punches and did a phenomenal job.”

This month, The Country Club will be celebrating its 40th anniversary as a bohemian, Bywater retreat. New visitors and longtime fans will be treated to the club’s lush new design as well as a special, prix fixe menu crafted by Chef Barbato offering a three-course dinner for two ($40). thecountryclubneworleans.com