Made The American Way 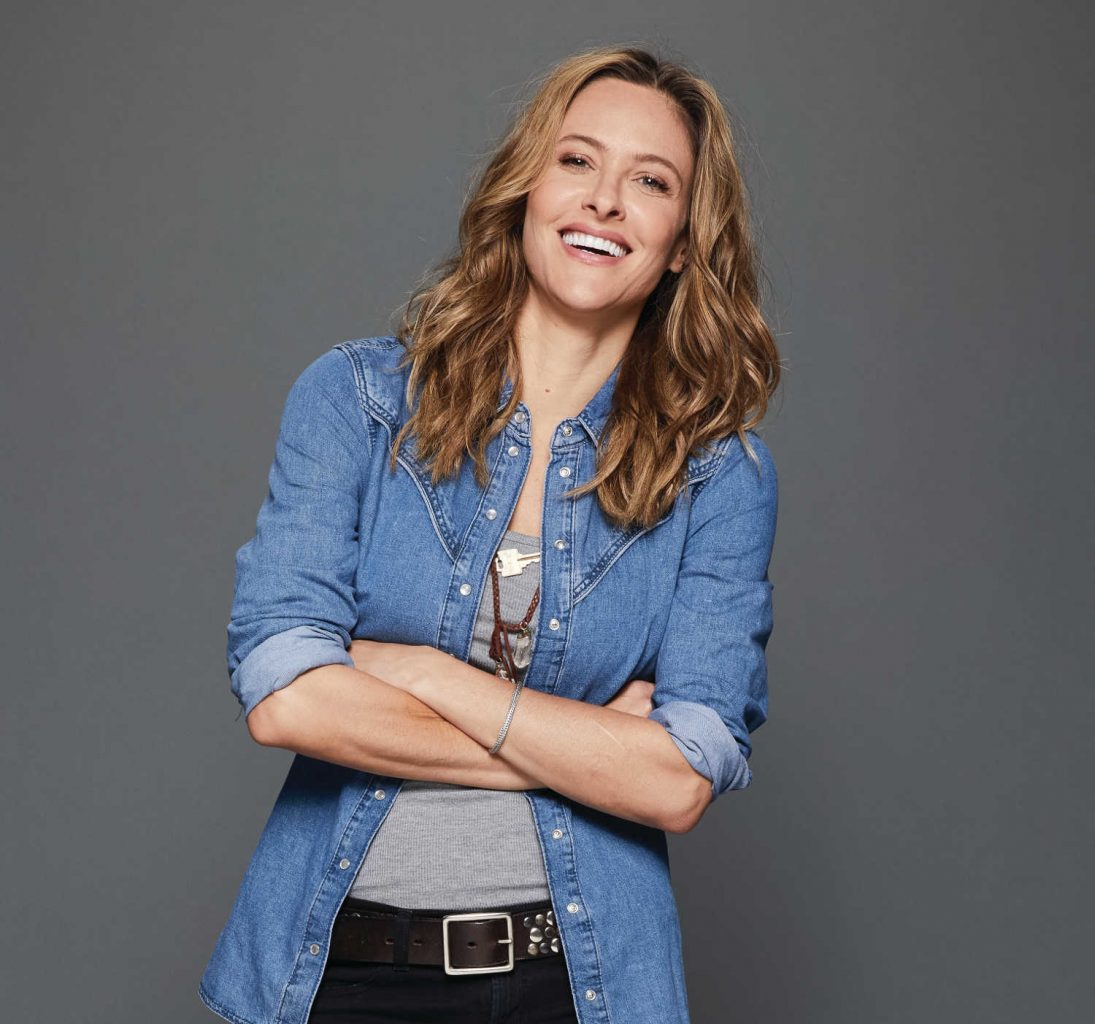 As technology takes a stronger hold on society, Americans are falling madly in love again with quality handmade products, and the dynamic actress, model and television personality Jill Wagner is enthusiastic about shining a spotlight on the passionate artisans that beautifully and painstakingly craft their wares the old fashioned way: by hand. As the host of Handcrafted America on the INSP Channel, a positive content entertainment network available in more than 80 million households, Wagner travels around the country to meet with the people that pour their minds, hearts and souls into their work to produce gorgeous, functional one-of-a-kind labors of love that others can truly appreciate. Season 3 of Handcrafted America debuts Aug. 11 at 7:30 p.m. with 13 episodes and will feature three Louisiana artisans, including two from New Orleans. Wagner is especially excited to introduce the artisans and their processes to the American audience.

“New Orleans has an energy and a rawness that lends itself very well to the show,” Wagner says. “I always say we could do a whole season of Handcrafted America in New Orleans alone. It’s hard to be in a city like New Orleans and not be like, ‘Let’s do the ironworks; let’s do this; let’s do that!’ Because everywhere you look, there’s something fascinating.”

On Aug. 18, Ross Lunz of Skimmer Studio on Frenchman Street, a metalsmith who crafts unique furniture, lights and accessories from salvaged street signs and other discarded metal items, will be featured on Handcrafted America. “Ross basically went around and found all the signs from after Katrina, which were trash to other people, and he makes incredibly beautiful, very kind of emotional furniture, stools and chairs, and different things.” Wagner says. “As soon as he says, ‘This is from Katrina,’ it’s so much more than a stool. You sit on it, and it’s almost like you feel that pain and the sadness there, but what he’s able to do is so beautiful. He’s basically able to make lemonade out of lemons. It’s like he didn’t want to say, ‘Let’s forget all that’ — he wanted to say, ‘Let’s not forget it; let’s turn it around and make a point that through tragedy can come beautiful things.’”

Mark and Ann-Marie Derby of Derby Pottery on Magazine Street, who focus on Victorian tile, will appear on Handcrafted America Aug. 25. “Mark repairs the tiles that have been on the streets of New Orleans for hundreds of years — those name ones that are blue and white,” Wagner says. “Ann-Marie and Mark are a lovely couple. What I love about them is that they spent two years trying to absolutely perfect street tiles like they were a hundred years ago. No one left any instruction book on how to do it, so they had to really figure out the restoration process by trial and error. For anybody to care that much to fail for two years so that we as mankind could look at something that is authentic and true to that time, I really appreciate that. Lots of people would say, ‘Well that’s fine; nobody will know the difference,’ but Mark does, and it’s important to him to keep them authentic, and that’s what makes him so amazing. Everybody walks over the tiles and sees them all day so it’s like a gift to the city and to all of the people that come here.”

Another talented Louisiana artisan, Tee Don Landry from Key of Z Rubboards in Sunset, Louisiana, will appear on Handcrafted America Sept. 1.. He shares his story about how much he enjoys creating rubboards for musicians all over the world in the traditional way that his father Willie Landry did as the original creator of the first rubboard for Cleveland Chenier in 1946. “We wanted the show to not be so dry or like a how-to show, but to celebrate the artisans and show how interesting their world is,” Wagner says. “It’s fascinating to get to see what they do. I’m lucky to go around and talk to these people and get into their mind for a day; they’ve been doing this for years, and they are masters. In no way shape or form does the show think it can fully explain what they do in one day; we just want to celebrate what they’re doing and also we hope to spark an interest with other people. The whole handcrafted obsession is coming back.”

Fans of Handcrafted America have thanked Wagner, an effervescent, all-American beauty with a down to earth charm and a natural as host for the show, for being part of a television show that teaches them something new and makes them feel good. “It’s a very important time in America right now, and I believe we need to stay very proud of America and bond together,” she says. “It’s a good, positive show where we celebrate our culture and the people that want to keep a part of that alive — a part that may be dying in some instances. I’m proud of the show and what it stands for, and I love the people that create it. We all truly believe in it. It’s not fake or commercial, and that’s what draws me to it. It’s real, and the people on it are genuine, and we’re celebrating something that is really American — and I’m about as American as you get! I’m like apple pie! I am my father’s daughter, and he is like king America.”

Wagner was born in Winston-Salem, North Carolina, where she and her brother were raised by their father and grandparents. She graduated cum laude in business from North Carolina State University and goes back home often to spend time with her family, hanging out on her grandfather’s farm. “My family is my strength,” Wagner says. “They are my roots and always keep me honest and grounded. I’m lucky to still have my 90 year-old grandma around. My dad and I did a couple of episodes of a show on the Travel Channel called Jill and Dad’s America where we traveled around to remote parts of the country in a father/daughter road trip of a lifetime. It was so much fun and something I will always remember. He’s one of the most patriotic people I know, an ex-Marine, real McCoy type guy that they just don’t make anymore, and he’s never met a stranger.”

Being cast as the first female regular sketch performer on MTV’s Punk’d, the hit hidden-camera practical joke reality television series created by Ashton Kutcher, was Wagner’s entrée into Hollywood. “It was so much fun,” says Wagner, who possesses a great sense of humor and got to prank celebrities like Katie Holmes, Tommy Lee and Usher on Punk’d. “I grew up with my dad who loved to play tricks on me, and my bother, so I had a lot of practice. Ashton inspired me to stay with it and dive into the entertainment field.”

Wagner dove head first into her career and has flourished. She’s hosted all three seasons of Handcrafted America, won the 2016 CableFAX Program Award for Best Family Friendly Host and also co-hosted ABC’s reality series Wipeout. She became known as “The Mercury Girl” as the spokesmodel in TV ads for the Ford Motor Company’s Mercury brand. She’s guest-starred on hit TV shows like Monk and Bones, played Kate Argent on MTV’s popular series Teen Wolf and starred as Krista Starr in Spike’s Blade: The Series, based on the Marvel Comics character and the feature film franchise. She starred in the award-winning horror film Splinter and developed a cult following within the genre. She was in films such as Junebug, Shifted and Christmas in the Smokies.

She’ll play Jason Mamoa’s wife in the upcoming film Braven and will shoot a movie for Hallmark based on her and husband David Lemanowicz’s real life love story; the couple were married in April. “We have an interesting love story,” Wagner says. “I wrote the treatment and I’ll be a producer and act, but it’s going to be weird to cast my husband! It’s something my family is going to die over, especially when I have kids.”

In addition to the talented artisans in and around New Orleans, Wagner is enchanted with the city itself. “I could go on and on about New Orleans,” she says. “I was walking down the street and I thought, I love this city so much! I’m a foodie, and the food is incredible, and this city is alive in such an interesting way. You can go to another city in another part of the country, and it has no flavor. New Orleans has a definite flavor. I jive with the people and the music. I’ve always loved the blues and that zydeco sound — I love it! I eat this city up! I don’t think you can come here and not feel it and not be struck by it. It’s like it’s its own animal, and I love animals! I feel like this city is like my spirit animal!”

Wagner is so enamored with animals that she’ll be an honorary celebrity co-chair for the Louisiana SPCA’s Howling Success Patron Party & Gala Nov. 10 at the Hyatt Regency New Orleans. “I’ve always had a strong connection with animals and a soft heart when it comes to their well-being,” Wagner says. “I love, love, love animals! I’m a big dog person. I support neutering your dog so we don’t have so many stray animals and packed shelters. I recently rescued a stray dog from a car wash. I was planning on adopting a dog from the local shelter but it looks like he found me! It’s my wish that all animals can find good homes and not have to live their lives in cages. A friend of mine fosters pit bulls and that has been a great eye-opener for me. Fostering gives them history with a person, family or other animals, and helps them get adopted. I am honored to be an honorary chair for Howling Success! New Orleans is a great place for people, so let’s make it a great place for the animals too!” insp.com/shows/handcrafted-america