As quite possibly the only Grammy Award-winning soap maker in the world, William Terry is clearly in a class of his own. 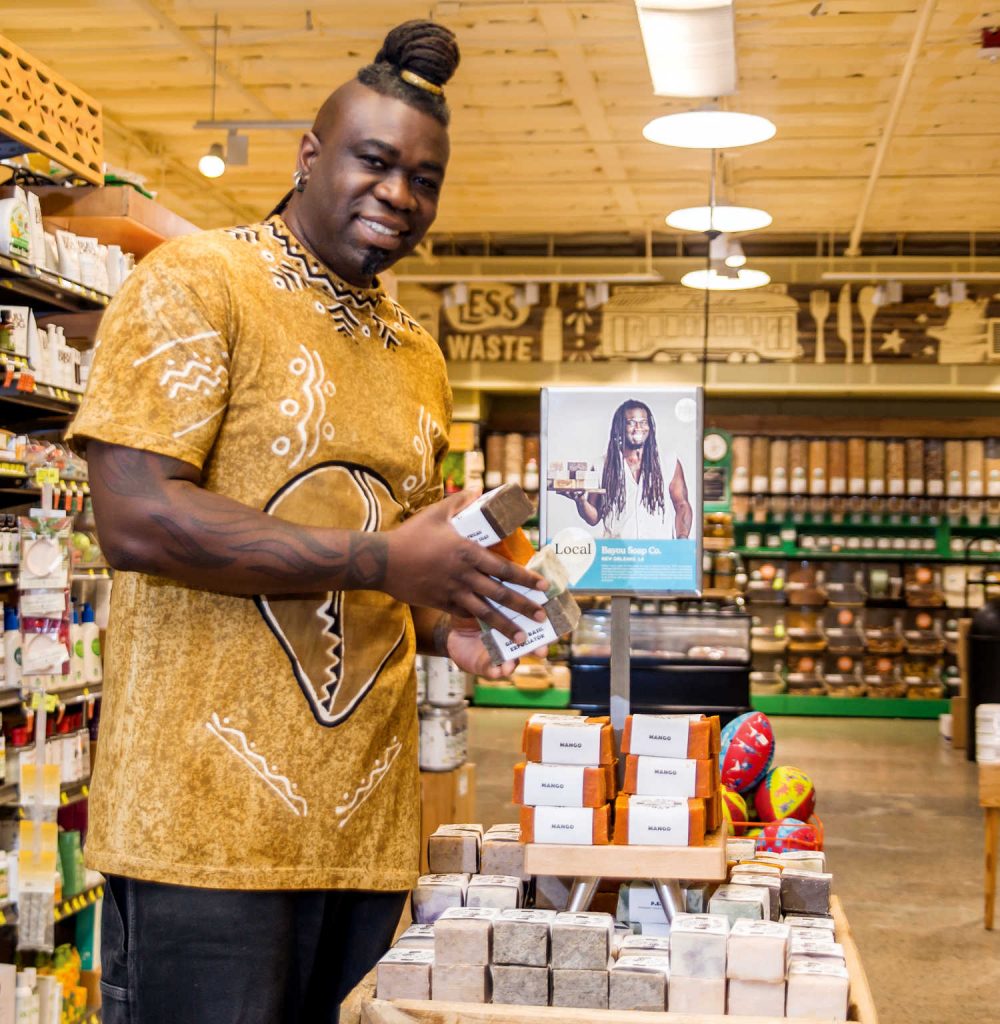 Terry, now the self-proclaimed Soapmaster General of Bayou Soap Co., was once a professional bass and saxophone musician. He played with Buckwheat Zydeco and even won a Grammy in 2008 with Terrence Simien for Best Zydeco Music Album, “Live! Worldwide.”

After Hurricane Katrina — a time he says was “just a big do-over for everyone” — he was exhausted from being on tour. A reader, he’d been collecting books about herbal medicines and tinctures. He was ready to stick around and fix up his house, and, in his free time, started brewing herbal concoctions in his FEMA trailer’s tiny kitchen.

“The music gig is a lot of fun but it doesn’t pay very well,” he says. “As you get older, you want a certain standard of living. It was time for me to try to make something else happen. You can always play music the rest of your life, it never goes away.”

It all came together when a friend tried his herbal shampoo and asked for an order for her salon. At the same time, artist friends were starting to make inroads at all the local markets — such as the Freret Street, Harrison Avenue and the Broad Street markets — that popped up to try to rebuild the community after the hurricane.

“After the sadness of Katrina, everyone wanted to get back,” Terry says. “People were gathering and reconnecting their neighborhoods, trying to grasp what was left. Everybody was missing the city.”

Terry wanted to be a part of that. And his artist friends were making really good money to boot. Suddenly, he had reinvented himself as a soap maker.

In the years since, Terry has experimented with a host of varying fragrances for his soaps including mango, pineapple, coconut, lavender, jasmine, clementine, patchouli, Ethiopian tea, frankincense and myrrh, and one of his best sellers, peppermint/eucalyptus/tea-tree. He supplies large orders to Whole Foods Market and is the No. 1 seller locally in the body care aisle (No. 3 in the region, even though he’s only in six of those stores). But he also does a booming business on his Bayou Soap Facebook page and at the fairs and festivals like Cajun Zydeco Fest, Piety Street Christmas Market, the New Orleans Jazz & Heritage Festival and usually his most successful, Essence Fest.

He no longer makes liquid soaps because the bar soap is what has drawn the rave reviews. “They have the personality of them, and that’s what people are attracted to,” he says. “Each of my soaps have a piece of art within itself. I didn’t know the idea would be as big as it is, but I’m glad because it makes people happy.”

And since he’s making a better living? “I’m okay now,” he says. “I’m a creative person … soap is just one of the outlets. I’m riding the wave of it right now. At some point, it’s going to hit the beach. Then I gotta get out there and catch another wave.”

Why wasn’t I making soap 20 years ago? “Because it didn’t come to me, and it wasn’t time,” he says. “The stuff that you’re doing currently, it’s what you’re ready for, it’s what you’re designated for. That’s put in place for you to do.” (His grandparents were both soap makers though, so he feels strongly he is channeling his ancestral creative energy.)

So if something lands in your lap: “I’m not religious, just more in tune with the universe,” he says. “It’s about paying attention to your surroundings. There’s no such thing as coincidence. If something blows in front of you, pick it up and read it. It might be the answer to whatever you were thinking. I’ve come up with some of the best soap fragrance mixes that way.”

What might be next? “The soap thing is cool, but it’s been 10 years now,” Terry says. “Lately, I’m getting in to making clothes. I like to wear unique things — clothes from Africa or India. I have a Chinese dinner jacket. I’m 6-foot-4-inches, and it’s hard to shop for that, so I’ve settled on that I have to learn how to make the things I like. I already have the clothing line. I know it’s going to be successful, because every time I wear it people ask me where I got it.”

In my spare time: “I love to watch animal shows; I’m in to PBS documentaries,” Terry says. “I was just watching one on the horseshoe crab; it hasn’t changed in 450 million years. You can learn a lot from the way animals exist; how they interact and only take the things they need.”