Home CULTURE Enshrining the Past, Illuminating the Future
CULTURE
IN THIS ISSUE
SPACES
July 31, 2017 Kim Ranjbar 0

Enshrining the Past, Illuminating the Future 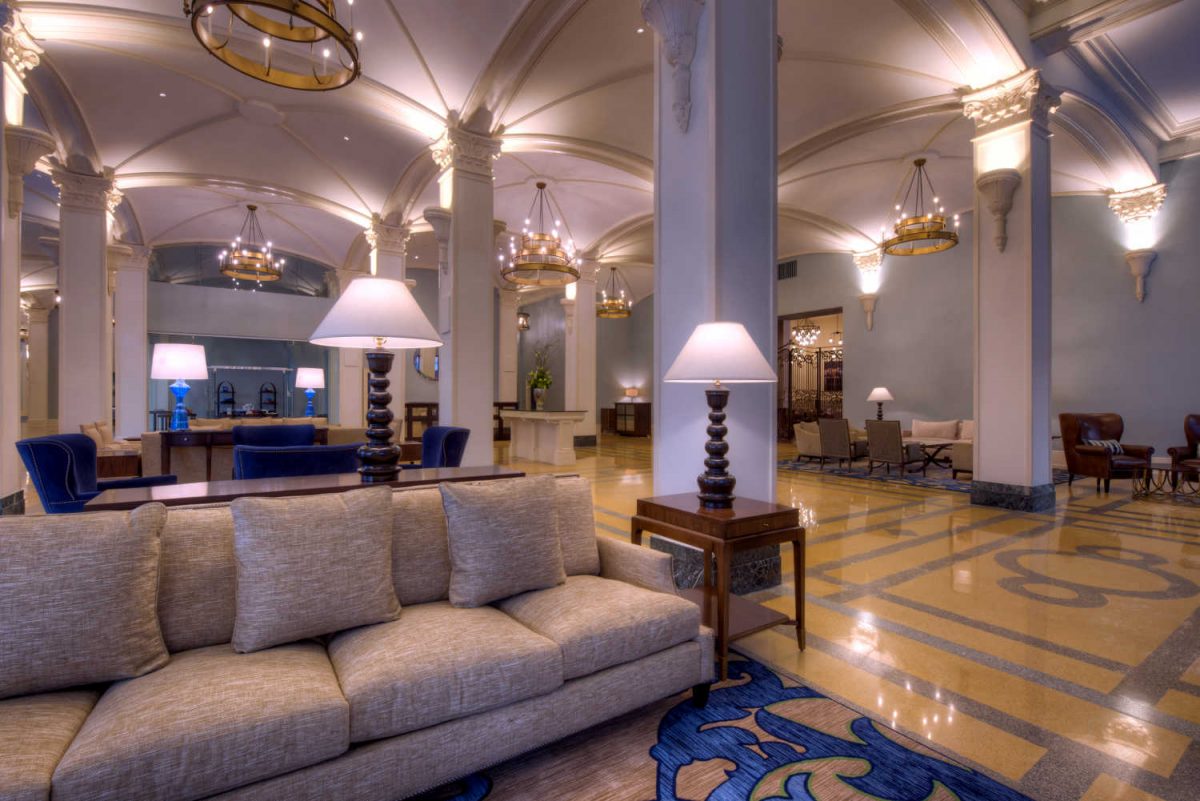 The 1920s-era, nine-story brick building on the corner of Baronne and Union streets had long stood empty, a derelict property with peeling paint, graffiti tags and rusty iron works. Originally built in 1927 by Louisiana firm Favrot & Livaudais, it was home to New Orleans Public Service Inc., a gas, electric and public transit company that left an indelible impression on New Orleans, and not just the city’s old manhole covers.

Just last month after a year-long, $33 million renovation, the luxury 217-room NOPSI Hotel, operated by Salamander Hotels & Resorts, opened with a grand ceremony featuring distinguished guests like Mayor Mitch Landrieu and Louisiana Lieutenant Governor Billy Nungesser. Also in attendance were several former executives and employees of New Orleans Public Service Inc. “It’s so amazing and enriching for us to be able to take [visitors] through the building,” says Ellen LeMaire, General Manager of NOPSI Hotel. “They remember the transaction table when you come in … it’s in the exact spot where it was before. I think everyone who has come through has been really happy about how respectful the renovation has been and how it speaks to the history of the building.”

A little over two years ago, Connecticut-based developers Building and Land Technology purchased the property for $11.6 million and hired local architectural firm Woodward Design + Build to oversee the renovation. As one could probably imagine, restoring a building that had been sitting empty for over three decades presented some pretty hefty challenges. In fact, the adjacent building that now houses the hotel’s restaurant Public Service (formerly the Jackson Homestead Association), was in such disrepair it had to be completely demolished and rebuilt. “The roof and the ceiling had caved in, water was getting inside and structurally, it just wasn’t able to be saved,” says Tom Abernathy, Project Executive of Woodward Design + Build. “That was one of the first challenges … to remove and rebuild an identical building back into that same narrow space.”

Another obstacle that required additional planning and work around was the NOPSI building’s original terra cotta structural system in the floors. “They’re sort of an interlocking clay brick that were made between structural steel beams that’s not an arch, but is like an arch, in that it’s laid out with a keystone that locks it into place,” Abernathy says. “So if we tried to make modifications to the building or put penetrations through the floor, that was sort of an unusual challenge that we had to deal with structurally.”

Even with these difficulties, the NOPSI Hotel emerged gloriously from the dust and debris, bringing the past into the present, while simultaneously forging a way forward into the future. One of the most talked about features of NOPSI, both past and present, is the palatial lobby that still features the intricately designed terrazzo flooring. “We kept that original flooring and patched it where we had problems,” Abernathy says. “We were really excited the owner was willing to do that. We love the way the floor looks, especially in its imperfectness.” The lofty vaulted ceilings, columns and capitals are also details from the original structure. For electrical reasons (among others) the original sconces uplighting the capitals were replaced with plaster replicas created by local craftsmen at New Orleans Metalworks. “The moldings had to be repaired,” Abernathy says. “There were places that were damaged or falling, but, essentially, it was the same thing that was there originally, just cleaned and repainted.”

Equally notable is the striking Dryades Ballroom with the classical exposed brick walls and towering, multi-paned windows. “The owner decided, along with the HDLC [Historic District Landmark Commission], to leave those historic windows in there,” Abernathy says. What’s not so classical, and seems to have everyone buzzing, is the uber-modern, “industrial chic” ceiling with not only exposed duct work, but an actual crane. “The Dryades Ballroom was originally an electrical substation, so it was full of heavy duty switch gear and electrical equipment,” Abernathy says. “The overhead crane that they left in there was used to move pieces in and out.”

Along with amenities like spacious, accommodating guest rooms with everything from hypoallergenic bed linens to iPod docking stations, guests of the NOPSI Hotel also have access to a fitness center, concierge services and 24-hour in-room dining. Additionally, the hotel also offers 76 suites, including four Spa Suites with access to generous terraces overlooking the Mercedes-Benz Superdome. Guests can also be assured their four-footed traveling companions won’t be left out in the cold. NOPSI’s expansive, pet-friendly policies incorporate everything your pet might need from a plush dog bed and a chef-crafted doggie menu to suggestions where you and your buddy can hang out like nearby parks, pet-friendly bars and grooming services.

A popular trend among the new hotels that have popped up in the Warehouse District and CBD, NOPSI also has a rooftop pool and bar. “At Above the Grid, the views are phenomenal and it’s just a really cool setting — one that no other rooftop has in the city,” LeMaire says. “We want people to come and enjoy the view if they’re going to stay the night or just to take a look at the skyline.” The hotel lobby also offers the underCURRENT Bar & Patio, where patrons can enjoy handcrafted libations like a High Voltage Fizz, and small plates or “edibles” including a pork banh mi or a muffuletta bruschetta.

Excitement over NOPSI’s renovation and repurposing into a luxury hotel cannot only be felt city-wide by nostalgic visitors and traveling guests, but also by the hotel staff itself. “The employees are so connected and are so enthusiastic about being a part of this hotel,” LeMaire says. “They really want to understand the history and … are so proud to be a part of what it was and what their parents knew it to be, and now they’re part of it, generations later. It’s so rewarding to have a team that is so proud to be a part of our little place in history.” 317 Baronne St., (844) 439-1463, nopsihotel.com