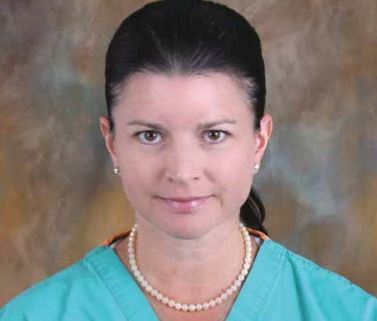 Dr. Angie Rhett Sassard is the only female general surgeon at East Jefferson General Hospital, and she doesn’t mind a bit.

“Everyone who knows me well knows I can hold my own,” she says. “I can even embarrass them sometimes too. I’m like one of the guys.” Her business partner, Dr. Raymond Decorte, is more like a big brother, and, like all the East Jefferson surgeons, they help each other.

“East Jefferson is small,” Dr. Sassard says. “We all have each other’s phone numbers. It’s like family almost. We all work well together; nobody is back stabbing or vying to steal cases.”

Dr. Sassard and Dr. Decorte recently joined Drs. Gordon, Creely and Jacob after the retirement of Dr. Don Guzzetta. She says the move has created an excellent opportunity for collaboration.

“We are all sounding boards among each other in the office,” says. “We bounce ideas off each other to get other expertise and opinions. That input makes for better patient care and even a better surgeon. And it’s easy to get when you have five surgeons in one group.”

This collaboration extends to meetings with other specialists, in particular, the breast care team. Twice per month, Dr. Sassard and her partners join a conference of East Jefferson radiology and medical oncologists, plastic surgeons, pathologists and the cancer care nurses. They discuss cases and issues, and, if need be, touch base with their MD Anderson affiliate for input.

Breast cancer care is an area where Dr. Sassard feels she really shines. She takes pride in joining a patient throughout their complete breast cancer journey, starting with biopsy, navigating the patient through surgery, referring to radiation and medical oncology, and consulting with the plastic surgeon on reconstruction options.

Dr. Sassard feels she relates well to breast cancer patients, especially since she was the one who discovered breast cancer in her mother (who is cancer-free 20 years later). Unlike an appendix removal where the patient is released and has only a tiny scar to remind them of the ordeal, breast cancer care is forever.

“It’s the core of what I do because of the continuity of care with my breast cancer patients,” she says. “I tell them, ‘I will follow you until I retire,’ which is going to be never.”

That’s not to say she doesn’t have plenty of other exciting cases with gall bladder removals, hernias and the like — especially when she is on call for the emergency room. One Monday night she had two emergency splenectomies; both were from trauma injuries.

“The ER thought that was really clever, calling me back immediately for the same surgery,” she said.

One big quality that sets Dr. Sassard apart is that she isn’t afraid to transport her own patients and she’s even been known to answer her own phones in the office.

“If you handed me a lit firework and said, ‘Hold this,’ I would take it,” she says. “I can’t stand a ringing phone. Plus, I’ve always been a go-getter. I’m not one to sit around and drink coffee. When I stop moving I’m usually just asleep.”

Though some laugh at her, there are huge advantages to pushing your own patients to the OR. It saves time waiting for transport; the doctor can start the procedure early; and the doctor has a rare opportunity to get to know their patients better. “I’ve had quite a few patients tell me, ‘I really like the fact that you were there walking with me, talking and making me feel really comfortable before my surgery,’” Dr. Sassard says. “And [then I can tell my colleagues] look who’s leaving an hour early!”

On family: “I tell my patients I’m 47 and I forgot to have family,” she says. “My 120-pound Italian Mastiff is my daughter.” Her boyfriend of eight years is a private chef. And she’s grateful to her photographer/firefighter brother for giving her parents grandkids.

On deciding medicine: “My dad is an orthopedic surgeon, and I started making rounds with him when I was like 4,” she says. “I was an orderly at St. Luke’s in Houston and started helping in the operating room in the ’80s when you didn’t have to have a lot of credentials.”

On training at Charity Hospital: “In my opinion, it’s one of the best programs you could ever go through,” she says. “I started in ’96 and remember enjoying it. It’s fun doing trauma work, especially back when I was young and could stay up all night.”

On NOLA as home: “I love this place; I’m never leaving here,” she says. “There’s a
certain small-town friendliness you don’t get anywhere else.” But you have to mind your Ps and Qs, she says. Once at the Mercedes-Benz Superdome, she sat next to woman who kept saying she looked familiar. The woman finally lifted up her shirt, proclaiming, “You did this,” and pointed to a gall bladder scar. She also had a bartender telling her about getting his appendix out right before Hurricane Isaac and that ended up being her handiwork as well.
4228 Houma Blvd., Ste. 220
Metairie, LA
(504) 885-4833, option 9

2.75K
previous The Dish on Diabetes
next Frank Lau, M.D., Director of the Center for Regenerative Medicine