The talented Mexican-American actress, Carla Jimenez, brings comedic depth to her role as Alba on Season 2 of FOX’s The Mick. 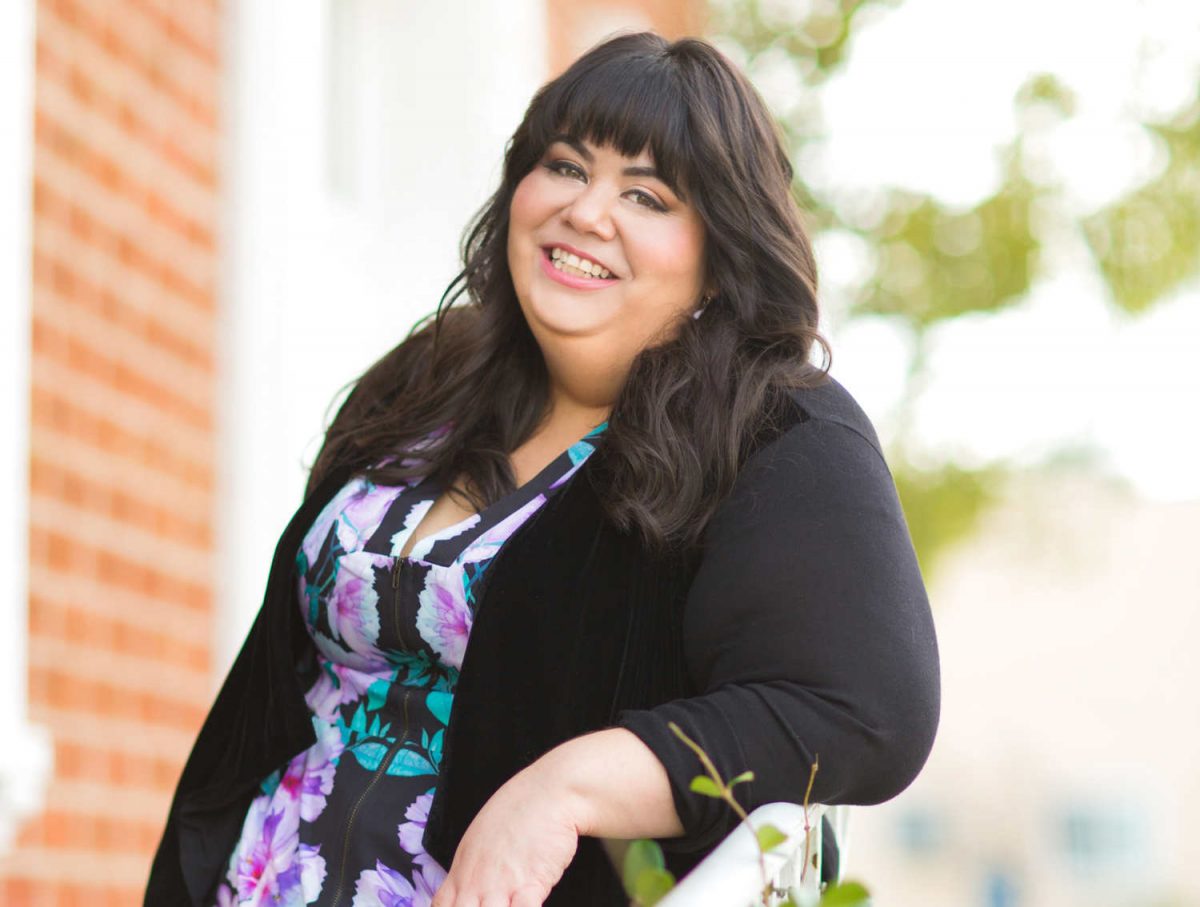 Since its premiere in Jan. 2017 as the top comedy launched on FOX since New Girl, The Mick has cracked up audiences with its wild, over-the-top dysfunctional family style antics, and Mexican-American actress Carla Jimenez has plenty to do with why fans of the show are obsessed. Jimenez landed her breakout role playing Alba on the series, a live-in housekeeper who winds up assuming guardianship of three wealthy, high-maintenance children. She joins their irresponsible Aunt Mickey (played by Kaitlin Olson), who reluctantly becomes caretaker for her spoiled niece and nephews, while their parents run from the law after being arrested by the FBI for tax evasion and fraud. Mickey and Alba become friends as they topple hilarious, outrageous obstacles, while raising the spoiled kids in a new family dynamic. The first season of The Mick delivered on the comedic goods and earned extra episodes, and the series landed an early second season pickup. Jimenez is excited to be back for Season 2, which debuts Sept. 26.

While the portrayal of a maid in film and television is often relegated to a supporting or background role, Alba stands out as a lead in The Mick, thanks to the intrinsic depth and layers that Jimenez brings to her character, thereby avoiding any stereotype and allowing Alba to be her own person. “Dave and John Chernin created the show and felt that they knew what people would expect, and they wanted to take Alba in a whole new direction,” Jimenez says. “They get the credit for Alba being on the frontline. It’s fine that she’s a maid, but that’s not who she is, that’s just what she does. Then to take someone who was very meek — because she’s kind of ignored — to now having her kind of letting loose has been really fun to grow her character like that. Alba isn’t as responsible as you’d think she should be! She’s just human; she makes mistakes like everyone else; and that’s what’s so funny about her.”

This season, Jimenez promises more outlandish hilarity dished out from Alba, who in the first season smashed a cop in the head with a glass, got drugged by her BFF Mickey and wound up stuck on a raft wearing a maid outfit. “People like when she just goes bananas over the top,” Jimenez says. “Fans have told me that they love that Alba parties. They’re really behind Alba just cutting loose, and I got one of the best responses with the episode when she was singing The Lion Sleeps Tonight and smoking pot. They tell me they like that she says what they are thinking. I’m hoping maybe something like a love interest for her happens this season.”

Before securing her first role as a series regular with The Mick, Jimenez did lots of recurring roles and guest starring in popular sitcoms like FOX’s Raising Hope, ABC’s Desperate Housewives and NBC’s Last Man Standing. The funny lady had the time of her life working on the wacky luchador wrestler comedy film Nacho Libre starring Jack Black. “Oh it was so much fun!” says Jimenez. “It was a dream come true getting to work in Mexico with Jack Black and (director and writer) Jared Hess, who did Napoleon Dynamite. I played the daughter of a famous wrestling agent. There was this scene where Jack Black and his partner ‘Esqueleto,’ or ‘The Skeleton’ in English, played by Héctor Jiménez, go to a party and I’m there and I fall in love with Esqueleto, who comes up to my bedroom but he doesn’t know he’s coming to my room and he sees all these creepy dolls and then turns around and I’m right there telling him that I love him, and he’s trying to get away! (Laughs). I had a great time doing that scene.”

A native Californian, Jimenez hails from a family who appreciates good humor. “I come from a very funny family,” she says. “My dad is so funny and can make anyone laugh. I love my dad. He pulls out these great one-liners. I get my comedic genes from him. My mom is funny too. My sisters and I grew up one upping each other, trying to make each other laugh. It was never a show thing; I didn’t know I wanted to be an actor until high school when I figured out it was a career. Before that, I played pretend a lot. I lived in my head and created worlds, and, when I got to high school, I was like, ‘Okay, I’m going to be a singer and I’m going to go to Broadway; I’m going to be that type of performer.’ I was so set on that, but L.A. is the land of film and TV, so even though I was doing theater, an agent found me and I started doing TV shows and never looked back.”

Jimenez possesses some serious chops as a physical comedienne along the lines of such comic luminaries as Lucille Ball and Ethel Merman. “Ironically, Lucille Ball is a major inspiration to me,” Jimenez says. “My dad loved to introduce me to older movies and TV shows like I Love Lucy, and I kept watching it to the point where he’s like, ‘How many times have you seen this episode?’ I still watch it and laugh like it’s a new comedy. And Desi Arnaz could really pull stuff out! I’m obsessed with Tina Fey and Amy Poehler. I love Melissa McCarthy and Kristen Wiig; I like when someone’s comedy is so natural it kind of just falls out of them. It’s why I love working with Caitlyn, because I watched It’s Always Sunny in Philadelphia and she stood out to me. Her timing is so good, it’s inspiring to watch. And I love so many guy comedians as well. I loved all that sketch comedy — SNL, SCTV and all the comics that came out of there like John Candy. I thought all of it was great.”

The influence of Jimenez’s own family appears in her portrayal of Alba. When Jimenez’s mother first came to the United States from Mexico, she came to New Orleans to work. “She was hosted by a family in New Orleans and worked there as a nanny for a while then moved to California where she met my father,” Jimenez says. “People ask me about the accent I have on the show; I take it from my mom, because, even though she’s been in this country around 45 or 50 years, she still has an accent. My dad is very Americanized, yet he has this thick accent, which is what I kind of base the sassiness of Alba off of, knowing American phrases like he does. Growing up in Simi Valley, we were the only Latino family there for a while, but my parents encouraged me to be more American; they wanted me to integrate and do what I had to do. I didn’t really grab hold of my culture until I got older and got involved with the Latino theater community. I can speak Spanish with my parents but it’s very broken. I understand them 100 percent, but to speak back to them? That’s another story.”

Outside of her work with The Mick, Jimenez voices the character Señora Zapata for The Adventures of Puss in Boots, the animated children’s series on Netflix. She’s also a talented chocolatier who creates gorgeous and detailed hand-painted chocolates, true edible art that looks almost too good to eat, and has her own business, Pretty Sweet Chocolates. “It was born out of a hobby,” Jimenez says. “I was looking for a birthday present for a friend who has everything, so I made her chocolate and she loved it. I started doing it because it feels therapeutic to sit there and make little molds and paint chocolate. I’ve been doing it for a while now and people really love it; it’s a creative outlet. It’s so pretty too!”

Jimenez’s dream of visiting New Orleans came true earlier this year. “All my life I wanted to go to New Orleans,” Jimenez says. “In my 20s I even dated a guy from New Orleans very briefly and he had this drawl, very sexy, you know! I went for the first time this year in January, and I absolutely loved it! I took a cruise with some friends that left out of New Orleans and we spent a week in the city afterwards. My favorite thing was being in the French Quarter. I love jazz and blues music. We took a tour and our guide was a first responder from Katrina and told us what everyone went though and showed us places that were rebuilt; it was great talking to him. And the architecture was amazing! And I love the food, especially beignets and the chicory coffee, wow! That was pretty awesome. Of course the people of New Orleans are great — they’re just so nice! Everybody was so cool to us.”

The Louisiana SPCA’s Howling Success 2017 Patron Party and Gala is Nov. 10 at the Hyatt Regency New Orleans, and Jimenez, an avid animal lover who promotes pet adoptions and fostering, will serve as an honorary celebrity co-chair for the event. “I’m honored to be a part of it,” Jimenez says. “If I could hug every animal, I would. My sisters and I grew up loving animals, and I’m adamant about rescue. I have two rescue cats. My cat Joey is such a good boy! He follows you to the door, greets you, sits on your lap; he’s made believers out of people who don’t love cats and he never hisses! He’s like a cat-dog! I got Joey and my cat Max when they were sick in the shelter because I’d rather take them sick and fix them than have them be killed, and they’re fine, beautiful, healthy cats now. I talk to people and encourage adoption from high-kill shelters; getting them out and spaying and neutering them is important. We must take care of them and not give them up when a new baby comes along. It’s our responsibility to them.” fox.com/the-mick, la-spca.org