Jean Lorent Makin is ushering in a new age of style. Her designs are based on classic accessories but made uniquely contemporary with exotic leathers and exquisite patterns. 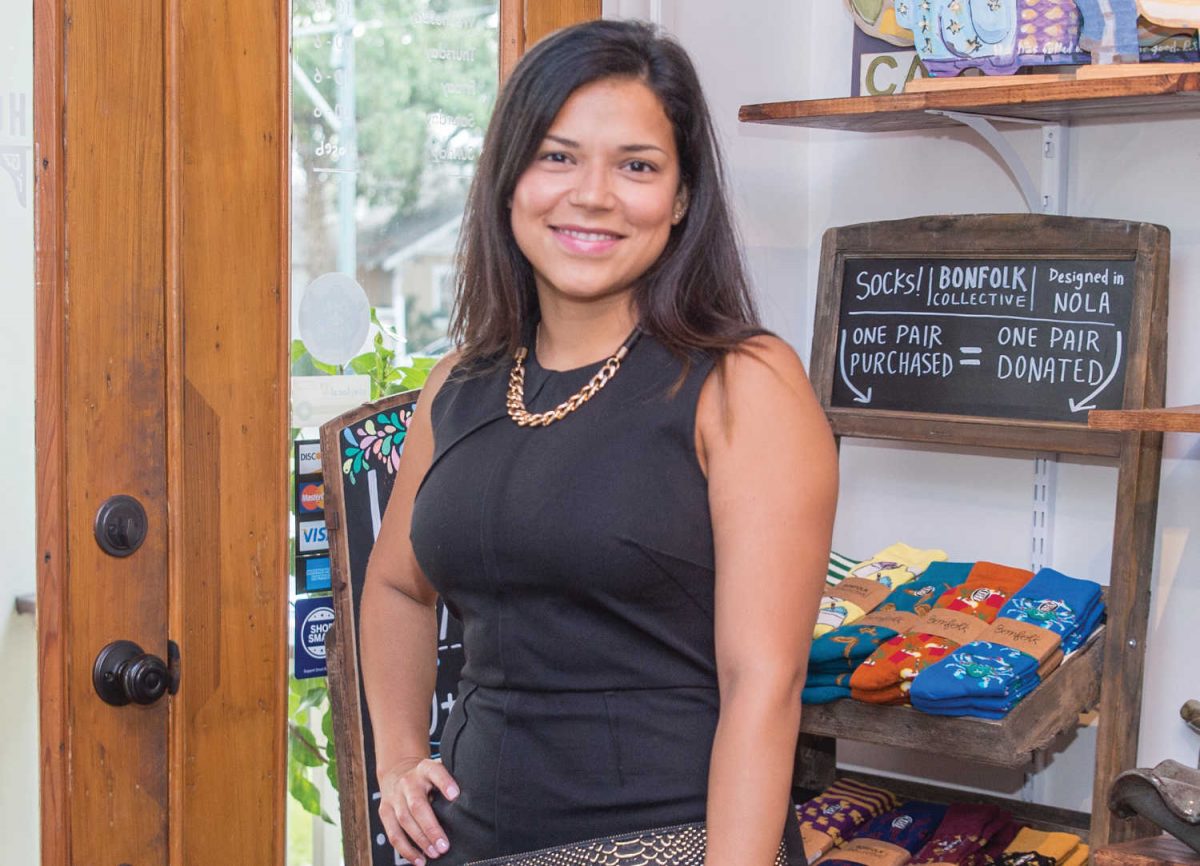 Designer and creator Lorent Makin produces a variety of men’s leather bowties and suspenders, and women’s bags, by hand in her little shop in New Orleans. Her ever-growing line of products is made entirely from full-grain leather sourced solely from the United States, and the pieces are aniline dyed, a process that soaks color deep into the leather so that the grain, pores and scars remain visible on the surface; no two pieces will come out exactly alike.

Lorent Makin hails from Venezuela but made her home in America where she worked as a field engineer in the oil industry. She worked in the states and abroad, but finally landed in New Orleans where she worked in the Gulf of Mexico. She started her crafting as a hobby, while she was working in this rigorous position, because she would work for two weeks on the rig, then have a whole week off at home. She specifically started making her now-signature leather ties because she wanted to make a leather bowtie for her hair. That idea eventually evolved into a pinned bowtie for women; then it became a men’s tie.

Unfortunately, Lorent Makin lost her field engineer position in 2015, but it afforded her more time to work on her leather crafts. She realized her art could become a real career for her. She began making and selling products under the company name NOLA Leather that same year, selling her wares at local festivals and in stores. Her very first festival was the Freret Street Festival, which she claims is one of her best places to sell. She also had a vendor slot at the 2016 New Orleans Jazz & Heritage Festival, but bad weather cut into her ability to sell out of her products. Lorent Makin is ready to take her business to the next level, and, as wonderful as the New Orleans market has been for her, she wants to make herself a household name nationwide.

In 2016, she took the regional feel out of her the company’s name and rebranded to her name Jean Lorent so that her products could sell better in other markets. She used her name because, before the rebranding, she said, “People thought NOLA was my name.” Her leather goods are currently available in more than 30 stores nationwide, and the products are especially beloved by wedding parties. “Our leather bowties and leather suspenders are very popular among the grooms,” Lorent Makin says. From California to Florida, from Texas to Massachusetts, Jean Lorent accessories can be found in the most exclusive boutiques in town.

She currently offers ladies’ handbags in a variety of colors and styles. The Silver Gator Leather Crossbody bag and Cheetah Hair on Cow Leather Clutch are incredibly eye-catching and original — just to mention two of her dozens of designs. Of course, she specializes in creating bowties and suspenders for men; she can make bowties for entire wedding parties.

Recently, Lorent Makin presented her collection during a poolside, catwalk-style fashion show at the Southern Designer Showcase. Now that her brand is getting more and more recognition, she plans to expand into even more designs for her existing pieces and will branch out into crafting more kinds of accessories. While boutiques are great for her brand, she hopes to get into the bigger brand stores soon. If you want to catch her locally, you can see her products at many local stores, and she still plans on setting up shop at some festivals. These leather goods are far from basic brown and black; Jean Lorent is a world of color, texture and creativity.