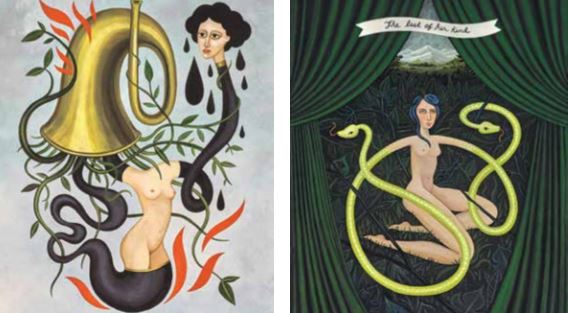 Los Angeles-based contemporary artist Anne Faith Nicholls provides a refreshing look at the soul of the modern woman and artist with her exhibition at Martin Lawrence Gallery entitled Strange Botanica. Her style can best be described as Neo-Surrealism or Neo-Folk-Surrealism. She draws inspiration from early American and European Folk Art; French, Mexican and Spanish Surrealism; and Society Portraiture of the late 19th and early 20th centuries. Her new body of work captures “the history and mystery surrounding the artistic soul of New Orleans.”

Nicholls’ own unique style incorporates both oil and acrylic to achieve a signature layered look and a saturated, antiqued, color palette. She cites the Surrealist Manifesto as an inspiration in many of her works, and she focuses on the subconscious or the dream state in the core of her imagery.

An opening reception with the artist is taking place Sept. 9 from 6-8 p.m. at the gallery, with entertainment and light refreshments. The exhibition runs through the end of this month. 433 Royal St., (504) 299-9055, martinlawrence.com
Wit and Whimsy: Doyle Gertjejansen’s exhibition at Callan Contemporary offers both a critique and celebration of painting itself.

In his exhibition at Callan Contemporary, entitled Faith and Reason II, Doyle Gertjejansen integrates conceptual rigor and jazz-like improvisation in his mixed-media paintings. Now on view through Sept. 30, the exhibition features works with disparate motifs that float, jostle, arch and vibrate in compositions that juxtapose jagged lines with sinuous curlicues, and earth tones with vivid hues. His work is about action and reaction, the arbitrary and the planned, the authentic and the contrived.

Recurring images include clouds, raindrops and other anti-aesthetic marks, alluding to the possibility of narrative. A hallmark of his technique is the integration of liquid graphite to create the uncanny illusion of gestures within a gesture.

Gertjejansen taught at the University of New Orleans for four decades, 13 years of which he chaired the school’s Department of Fine Arts. A recipient of a National Endowment for the Arts Fellowship, he has exhibited his paintings, drawings, monotypes and sculptures in solo and group exhibitions around the world. 518 Julia St., (504) 525-0518, callancontemporary.com
Music Makers: The GOOD MEASURE Tour II comes to New Orleans at The Troubadour.

A multi-city music tour, known as the GOOD MEASURE Tour II, explores vintage inspirations as it travels across the country. The tour, which is a collaboration between Joie de Vivre Hotels, Noise Pop and Harken Wines, kicked off June 14 with artist Skylar Spence at Joie de Vivre Hotels’ first New York City outpost, the recently opened Hotel 50 Bowery. The second stop on the tour was at The Marker San Francisco Aug. 18 with a performance by The Stone Foxes, an esteemed San Francisco rock band that has played alongside The Black Keys, Cage the Elephant and ZZ Top. The final stop of the tour is right here in NOLA at The Troubadour Sept. 14, featuring a performance by the Dirty Dozen Brass Band at the hotel’s rooftop bar, Monkey Board.

102
previous The Joy of Design
next Intentional Adventures