The Saints’ new running back will catch on quickly. 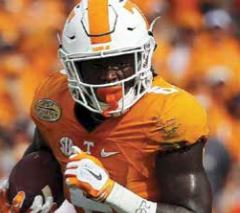 Entropy is an idea not often discussed in pro football. The tendency of bodies in space to move away from each other is not in keeping with a game in which the purpose is for bodies to crash into each other. And yet if a football team can find a single player whose nature is explicitly to avoid those crashes and break out into open space, the results can be exceedingly destructive. The Saints may have found such a player in running back Alvin Kamara, whom they drafted in the third round of the 2017 draft. Kamara committed to Alabama — but later transferred — and then was a redshirt and backup for much of his career playing for the University of Tennessee Volunteers. But in his final season, he emerged as a leading rushing talent in college football and ultimately became one of the fastest rising names in the NFL draft.

In his first start against the Texas A&M Aggies, Kamara blew observers away — 215 pounds, explosive and effective in the passing game, he burst onto the national scene by rushing 18 times for 127 yards and two touchdowns, adding eight catches for 161 yards and one more touchdown, as well as 24 yards in punt and kick returns. It was a shocking display of talent, and that 300-yard performance gives context to the Saints’ decision to give up a second round draft pick in next year’s draft to nab him before the 10 or so other teams that had been rumored to be interested in him. The Saints, having well established Mark Ingram on board as a fixture, and having acquired future Hall of Famer Adrian Peterson as a backfield mate, seemed the least likely team in the league to take such a dive. And yet they undoubtedly saw what they believed to be an emerging talent that could give the franchise the best three-headed running attack since the days of Rueben Mayes, Dalton Hilliard and Barry Word.

At the NFL combine, Kamara demonstrated the athleticism that, together with his full skill set, may have been another factor in the Saints surprising decision. He led all running backs in the vertical leap (39.5 inches) and the broad jump (almost 11 feet). After that display, Kamara entered the short list of top NFL running backs after the elite group of Leonard Fournette, Dalvin Cook and Christian McCaffery, and even earned mention as a possible first-round pick. Nonetheless, Kamara still generated doubts among some that his lack of time as a lead back (he never had 20 carries in a game at Tennessee) and his perceived weakness at running between the tackles did not justify using too high of a pick on him. He was sometimes considered to be a third-down receiving back who would excel at getting the ball in the passing game and then earning yards after being targeted in space, not as a primary back who could get yards in the inside rushing game.

Sean Payton extemporized recently on his explanation for how Kamala might have fallen through the cracks of college football stardom and into the Saints’ hands. “We try to evaluate the player and then envision the role that we have for him,” he said. “Sometimes you have highly productive college players that have trouble finding their niche at this level, and there are other times where players have played and demonstrated some skills that you’re looking for, but maybe didn’t have the large production, that end up going to have significant NFL careers. I know this: When I was on that school visit, they spoke highly of him and felt like he was a key contributor. The workout and all the things we did when we were there for a day were really impressive.”

The doubts were rapidly dispelled in the Saints’ first preseason game against the Cleveland Browns in which Kamara twice broke out in limited opportunities to pick up big yards after apparently being pinned down in heavy scrums near the goal line. The criticism was quickly dispelled in Kamara’s second carry of his NFL career as he ran up the middle, emerging from a phalanx of tacklers to pick up an improbable 12-yard gain, culminating in a blow from a Browns safety, which left the opposing tackler, Ibraheim Campbell, on the ground with a concussion. Just two carries later, Kamara again seemed stuffed in the middle on a second-and-three to go, but he slipped out of the grasp of his would-be tackler and, showing vision and agility, easily popped outside to stretch the run to 22 yards, as he was eventually driven out of bounds but never brought down. The rap on Kamara as unable to pick up tough yards down the middle evaporated, and the performance opened eyes across the league.

Though Kamara did not enjoy any other games like his breakout start versus the Aggies, he was remarkably productive and efficient, generating 23 touchdowns in only 284 touches from scrimmage and gaining 6.2 yards per carry, often picking up yards that his blockers had not created for him — the very same quality he showed out the gate against the Browns. In that respect, the Saints are a terrific landing spot for Kamara, as the system perfectly exploited the talents of similarly hyper-athletic backs such as Reggie Bush and Darren Sproles. Though Kamara, who had a somewhat underwhelming 40-yard dash time of 4.56 seconds at the NFL combine, perhaps does not match the speed of those backs, he certainly has the capability to do what Pierre Thomas did over the years. Like Thomas, Saints fans will find Kamara fun to watch, as he has a smooth running style; he has football smarts in the way he times his runs; and he finds creases and catches off-target passes fluidly.