Staying on top of vaccinations and pap smears leads to early detection and treatment. 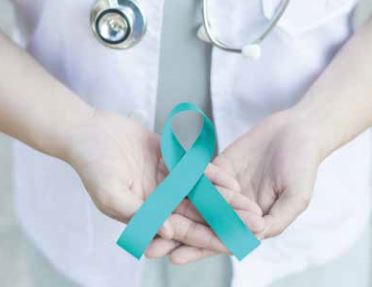 “We’ve made excellent progress with the treatment of cervical cancer over the last few decades,” Dr. Cheng says. “Many patients who have early stage cancer will be cured by surgical treatment, much of which can be performed using minimally invasive procedures.”

The DaVinci robot has greatly improved a skilled surgeon’s ability to perform a radical hysterectomy with lymph node dissection, making smaller incisions and quicker recovery. Even patients with locally advanced cervical cancer can be treated very effectively with a combination of chemotherapy and radiation therapy.

Furthermore, prevention of cervical cancer is more promising than ever with the advent of the HPV (human papilloma virus) vaccine. “It is estimated that the HPV vaccine can prevent roughly 90 percent of all cervical cancer,” she says. “It is realistic to hope that one day, we will be able to eradicate it. Unfortunately, the vaccine has not been wholeheartedly embraced in the U.S.”

Some of the major barriers to adolescent HPV vaccination include parental concerns about safety, physician and parental reluctance to openly discuss topics related to sex, perceived lack of necessity, and vaccine cost and coverage.

“It’s also important for adolescent boys to get the HPV shot, which many parents are not aware of,” Dr. Cheng says. And to get the full benefit, the entire course of the vaccine should be given before a young adult becomes sexually active.

Overall, shot side effects are few and quite minor, and most patients tolerate it extremely well. “Medical evidence from very large clinical trials show that the benefits far outweigh the risks of the vaccination,” Dr. Cheng says. “It’s important that the medical community send a clear, consistent message that HPV vaccination is a very strong recommendation and equally important to engage in an open dialogue with our patients and their parents about it.”

Dr. Cheng says one of the reasons that the pap smear is such an effective screening tool is that we can detect precancerous lesions before they become cancer. “We can accurately diagnose those lesions before symptoms begin and effectively halt the progression of cancer,” she says.

Gynecologic oncologists are helping advance research in the gynecologic cancer field including:

When in doubt, it’s always best to see your doctor or specialist, Dr. Cheng says. The earlier the diagnosis, the better the outcome. And keep in mind the option of being referred to a gynecologic oncologist like Dr. Cheng should the need arise because these sub-specialists are generally up-to-date with the most current treatments of gynecologic cancers.

“In the greater New Orleans area, it’s easy to access our care,” she says. “There are some remote parts of the country where it is more difficult. But here at Touro and in the city, we see patients from all over the state, Mississippi and Alabama.” touro.com/cancer