Home CULTURE Honoring the Past, Building the Future
CULTURE
IN THIS ISSUE
SPACES
October 2, 2017 Kim Ranjbar 0

Honoring the Past, Building the Future

A century-old building, once the city’s cultural and economic heartbeat of the African American community, The Pythian has been given new life as a mixed-use complex in downtown New Orleans.

Located on the corner of Loyola Avenue and Gravier Street, The Pythian building was, even before the levee failures of 2005, an eyesore. A blighted structure with boarded up windows and a crumbling 1950s facade, it was hard to fathom that back in 1908, this building was both the real and symbolic pinnacle of S.W. Green’s lifetime achievements and a center for social, cultural and commercial viability within New Orleans’ African American community.

Costing more than $200,000, The Pythian Temple was originally created by local architectural firm Diboll, Owen & Goldstein in 1908 for S.W. Green, a former slave who became a self-made millionaire and leader of the Colored Knights of the Pythias of Louisiana. At that time, the building was the tallest in the area and hosted many African American businesses like Green’s Liberty Independent Life insurance company, the Negro Board of Trade and the Louisiana Weekly newspaper. “We think of [The Pythian] in some ways, in our office, as a different kind of monument that deserves so much discussion,” says Will Bradshaw, president and co-founder of Green Coast Enterprises. “This is a monument to our best selves.”

Several years ago, Green Coast Enterprises, ERG Enterprises and Crescent City Community Land Trust purchased the building, and, after a $44 million renovation, The Pythian is finally nearing completion. In fact, the residence portion of this new, mixed-use structure already has rented about two-thirds of its 69 units. Also, approximately 36 percent, or 25 apartments, were reserved as income-adjusted units. “The strategy for this project was a focus on people who make between 60 percent and 120 percent of varying median incomes, which is, depending upon size of family and other factors, something like $30,000 to $65,000 a year,” Bradshaw says. “We had a wait list of 140 people before we even finished construction.”

Local architectural firm StudioWTA was tapped to handle the monumental task of restoration and redesign of The Pythian, and many obstacles stemmed, in no small part, from the “modernization” the building had undergone in the 1950s. “It was a very different time,” says Wayne Troyer, partner and design director of StudioWTA. “The detailing and the ornamentation was much less appreciated. It happened a lot during the ’50s — at that period, there was kind of disregard for anything historic.” By creating 3-D files of the original drawings, StudioWTA was able to re-create the facade’s ornamentation in glass fiber reinforced concrete. “They originally used glazed terra cotta, which is really rare and cost-prohibitive,” Troyer says. “But using these modern methods, we tried to represent the historic ornamentation as closely as we could.”

Before and after pictures of The Pythian show, without a doubt, that StudioWTA and local construction company Landis Construction took an almost Herculean task and made it look easy. “We think [the renovation] has come out just beautifully,” Bradshaw says. “We’re excited to have this opportunity to put this building, what we think of as the heartbeat of the city, back into commerce.” 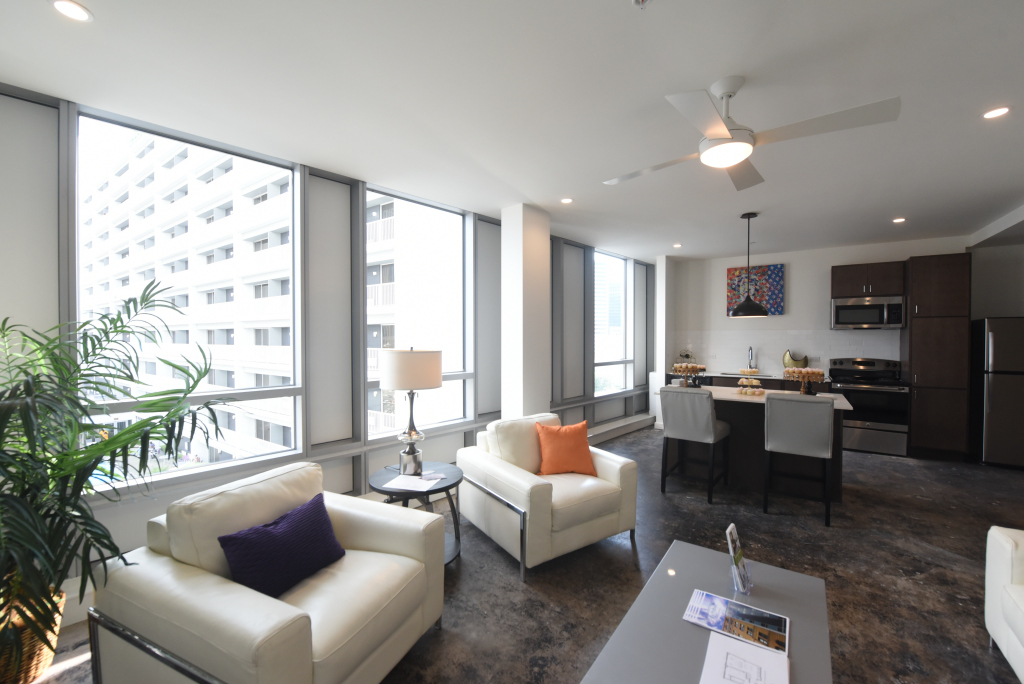 Aside from a fascinating history, the nine-story, 122,000-square-foot building offers its tenants beautiful, useful and forward-thinking amenities like a community care clinic through Access Health Louisiana and health services from Magnolia Physical Therapy; a roof deck that affords ample views of the city; in-building dry cleaning; security; and off-street parking. The Pythian also has partnered with Sara’s Pet Care Revolution to offer services to residents and their four-legged pals like dog walking, grooming and pet-sitting. “We tried to do a lot of things to make it where you can really take complete advantage of everything that Downtown New Orleans has to offer,” Bradshaw says.

One of the most unique aspects of The Pythian’s built-in amenities would have to be its bike-friendly atmosphere. Port Street Woodworks, a design build studio in Bywater, constructed singular wooden bike racks for every apartment. “It’s designed into the setup of the unit so you can integrate bike storage in a way that’s completely seamless,” Bradshaw says. “We’ve tried to help people integrate into their neighborhoods and be able to live a life that allows them to move around in all kinds of different ways.” They also offer another bike storage rack on the ground floor (if you don’t want to lug your bike back up to your apartment) and adjacent to that is a bike-washing station.

Easily one of the largest of The Pythian’s amenities, an area that will be available to both tenants and the general public, is The Pythian Market. Designed to house 19 different vendors, with three confirmed so far (Frencheeze Food Truck, La Cocinita and Laurel Street Bakery) the market is hotly anticipated by local foodies and slated to finally open early in 2018, along with a new event space and lounge.

Not only will this vast commercial space be a place of gastronomic delight, it will also serve as an opportunity to share elements, photographs and graphic art that will “interpret and reinterpret” the building’s history. Through a partnership with the Plessy & Ferguson Foundation, they are discovering more tidbits about The Pythian’s storied history every day. “About a month ago, we found who may be the closest living descendant to the Green brothers themselves,” Bradshaw says. “We also believe, from some work a Times Picayune reporter was doing a couple of years ago, that it is the first place Louis Armstrong ever publicly performed.”

The Plessy & Ferguson Foundation, along with the other important players on this project (ERG Enterprises, Green Coast Enterprises, Crescent City Community Land Trust, Landis Construction and StudioWTA) sponsored a plaque that is located across the street in Duncan Plaza, and the Louisiana Office of the Lieutenant Governor-Department of Recreation and Tourism has officially recognized The Pythian as a historic landmark. “The layers on this just go on and on and we’ll probably never do an adequate job of telling the story because there’s just so much,” Bradshaw says. “But we’re trying to do our best to make people know about it because it’s pretty remarkable.” thepythiannola.com