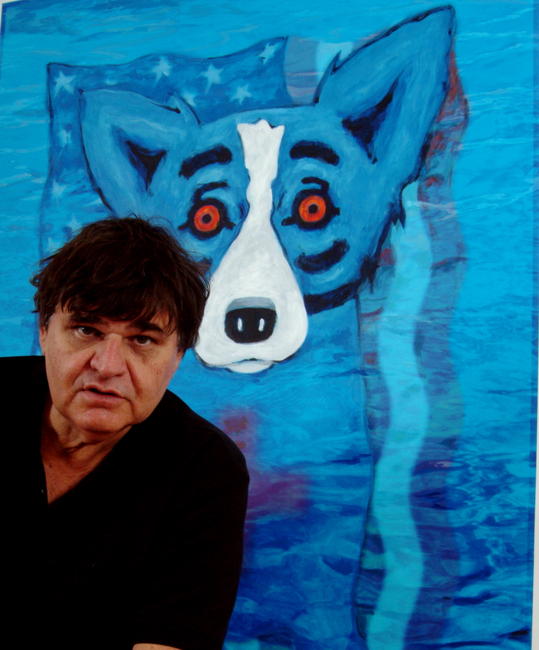 In an effort to benefit schools throughout Texas and Louisiana impacted by Hurricane Harvey, the George Rodrigue Foundation of the Arts and the Rodrigue family have re-released George Rodrigue’s historic post-Katrina print We Will Rise Again (2005). The historic original print after Katrina raised $700,000, much of it generated by Texans. This special release includes the reference “Hurricane Harvey 2017” in the white border alongside the words “We Will Rise Again” and Rodrigue’s official estate-stamped signature. The prints are currently available on the GRFA website for $500 each, a price set by Rodrigue for the 2005 post-Katrina edition.

Rather than limit the new prints by number, GRFA limits them by time, with hopes of raising much-needed funds as quickly as possible for hurricane and flood-impacted schools in Texas and Louisiana. The prints will be available to order through Dec. 31. The silkscreen prints measure 27 by 18 inches, and each print includes a framable statement by George Rodrigue, preceded by a message from his family. rodriguefoundation.org

The episode also features the history of music in New Orleans and behind-the-scenes artist and venue stories, including how Troy Andrews — better known as Trombone Shorty — got his stage name as a kid. (It was from playing in one of the city’s famed jazz funerals at such a young age that his trombone was taller than him.) Meanwhile, another story focuses on the Roosevelt New Orleans — a storied music legacy that housed the nation’s first nightclub, The Cave, until Prohibition shut it down. (The Roosevelt later debuted the Blue Room where legends Louis Armstrong, Frank Sinatra and Ella Fitzgerald hung out and played.) Also included are interviews with stars like Dave Matthews, Mark Ronson, Erykah Badu and Ani DiFranco. A conversation with Blacc accompanies this content, in which he previews his rendition of Louis Armstrong’s “What A Wonderful World,” created during his recent visit to New Orleans where he played an exclusive concert for Hilton Honors members at the House of Blues. spotify.com

Mudbound, which was directed and co-written by Dee Rees, is an adaptation of the prizewinning novel from Hillary Jordan about racial tension in the 1940s American South. Set during World War II, the movie is an epic story of two families pitted against one another by a ruthless social hierarchy, yet bound together by the shared farmland of the Mississippi Delta. It stars Carey Mulligan, Jason Clarke, Mary J. Blige, Garrett Hedlund and New Orleans native Jason Mitchell. In addition to being directed by a woman, Mudbound also features women in the lead roles of producer, writer, cinematographer, editor, sound mixer and head of makeup.

After receiving a record number of nearly 5,000 entries from 109 countries for the 2017 competition lineup — an increase of more than 20 percent from 2016 — the festival’s team curated a slate of original and provocative films. Overall, directors of selected films represent 44 different nationalities. This year, Louisiana-made films represent 29 percent of the lineup. This year’s festival will include the feature competition lineup, including 10 narrative feature films, 10 documentary feature films and 10 feature films made in Louisiana, plus a selection of short films. neworleansfilmfestival.org

130
previous Honoring the Past, Building the Future
next Get a Leg Up!