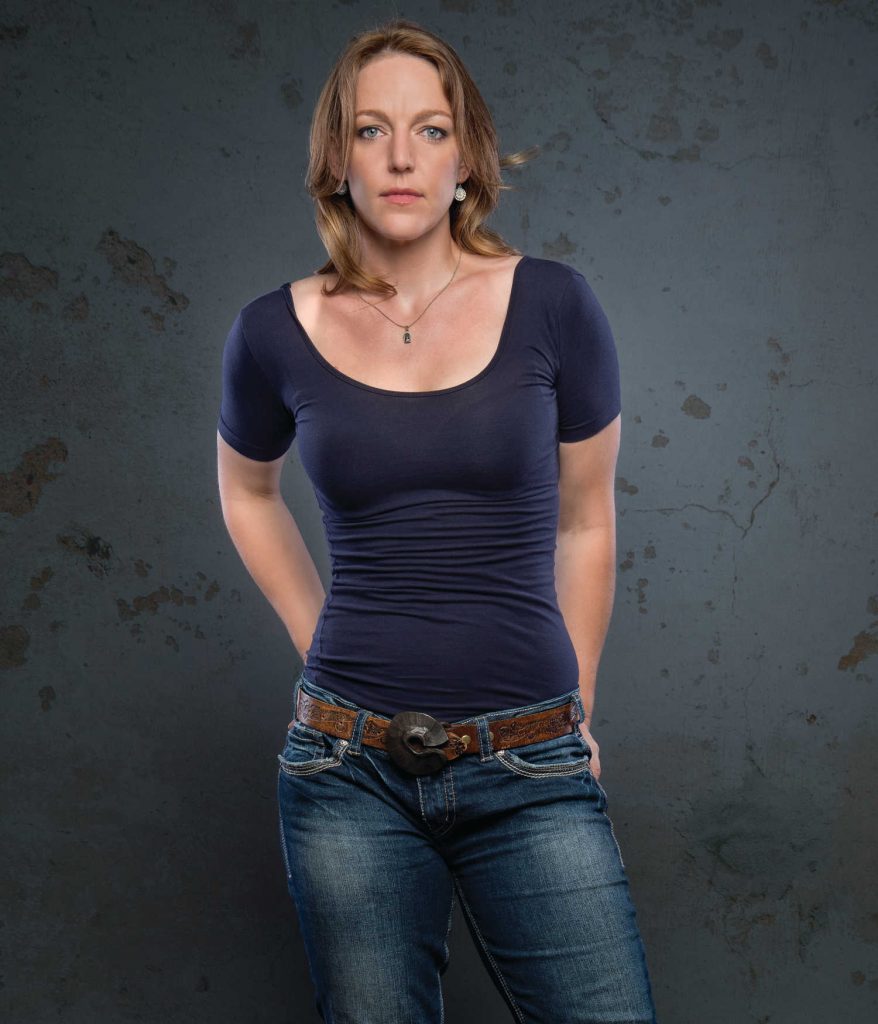 There’s a good chance that amongst those hanging around the Uptown, Riverbend or Mid-City neighborhoods enjoying food, drinks, live music or just celebrating life in New Orleans, local actress Kerry Cahill is in that number, indulging in the very same things. If not, she’s probably busy filming the next great movie or blockbuster television series, creating thoughtful films through her production company or advocating for veterans and animals. Cahill’s work spans from local theater productions such as George Brant’s Grounded and John Biguenet’s Mold to television and film including True Detective, NCIS: New Orleans, Free State of Jones with Matthew McConaughey, and Showing Roots with Maggie Grace and Uzo Aduba. This month, Cahill returns to her role as Dianne in AMC’s post-apocalyptic zombie horror series The Walking Dead for Season 8 and she’ll be in director Dee Rees’ film Mudbound, which was selected as the centerpiece film at the 28th Annual New Orleans Film Festival taking place October 11-19.

“It is a beautiful story,” says Cahill about Mudbound, which premiered to critical acclaim at the 2017 Sundance Film Festival and was acquired by Netflix. “It’s about a white family and a black family post-WWII in the 1950s. It was pre-Civil Rights, so, even if you were a war hero, you were still a black man and were told to sit at the back of the bus. It’s a small Southern town with two war heroes — one black, one white — and only they understand what they’re going through, like shell shock, but they’re not supposed to be friends.” Cahill plays Rose Tricklebank in Mudbound, who runs a general store. “She’s a working woman in the 1950s, so she’s pushing a bit of an edge and she’s nice, but she represents lots of people at that time who weren’t mean or necessarily racist, but they didn’t stick up for anybody and won’t buck the boat in terms of when oppression happens. It’s important to portray characters like that because lots of people are like that.”

This year, Louisiana-shot films including Mudbound will comprise almost 30 percent of the lineup at the New Orleans Film Festival. “Mudbound was filmed in Gramercy and Lutcher, places with great architecture that aren’t as modernized,” Cahill says. “I remember when the New Orleans Film Festival was very small, but it’s been growing and that’s great for students. UNO has lots of shorts that get in, and, for a film industry to thrive, it’s great to have a growing indie film community. People come from out of state and you see lots of different works you won’t see anywhere except at a film festival.”

Season 8 of The Walking Dead premieres on AMC Oct. 22 at 8 p.m., and Cahill is thrilled to be back playing Dianne, an outbreak survivor in a world overrun with zombies, after joining the global phenomenon of a series in Season 7. “It’s going to be a wild ride,” Cahill says. “Some of it is surprising, some is comic book, but it’s a big season with lots of amazing, cool stuff. What I like about the show and about my character Dianne is that because it’s the apocalypse and because of everything that went down, people get to be very strong without having to apologize for it or fit into some societal mold, because at this point the mold is to be strong and survive by necessity. It’s a very American story; look what happened after the hurricanes in Texas and Florida. It’s like, okay, we’re going to come together and survive. The walkers are a catalyst but the show is about how we get [and] then maintain human connection. We all want to believe we’ll be good or we’ll make it through, but really, who are you when stuff hits the fan?”

Born in Helena, Montana, Cahill grew up Catholic and visited New Orleans at age five, and the city left an impression on her. “My parents took lots of road trips, and, in New Orleans, a guy gave me a pair of beads on the street that I still have,” Cahill says. Years later she went to Loyola University New Orleans on a scholarship, earning a degree in drama with a minor in philosophy in 2005. “I wanted to come to New Orleans and knew I’d have a great college experience,” she says. “Loyola is a great liberal arts university. I learned so much from their theater program, how to build stuff and how to do lights. You get to do everything at small universities like Loyola and I got a great education.” Cahill also attended Queen’s University Belfast in Northern Ireland and the British American Drama Academy in Oxford, and later studied at Second City in Chicago.

Hailing from a military family who moved often, Cahill has called New Orleans home since 2000. “I’ve lived here longer than I’ve lived anywhere else, and there is no place like New Orleans,” Cahill says. “This is where I walk into the bar and everyone knows my name! I love sitting outside at Cooter Brown’s. I love Oak on Oak Street. I love hanging out with friends, grabbing oysters and catching live music. We’ll walk to the Columns to hear David Doucet play and sit on the porch there, even if it’s hot. I’m used to the heat now and I love it! And New Orleans is very accepting. That’s why so many transplants are here; people are like, ‘Oh I can be me! It’s fine!’ The biggest sin here is to not be yourself. For Halloween, I’ll be on my porch in a witch costume with my black rescue cat, Lucky, on a leash, with candy for the kids. Seeing the little kids in their Superman costumes is adorable! On Mardi Gras morning my ritual is to get dressed and do a walking krewe with my friends, then I’ll start my resolutions for Lent! I love the concerts outside of Jazz Fest because you get an amazing mix of musicians that you don’t get anywhere else, like jam sessions with Anders Osbourne and The Grateful Dead. It took me a year of being here to ‘suck the heads’ and now I’m all in it! And when I visit cousins and cook they’ll say, ‘Kerry, don’t make it too hot,’ because I’m now the person adding cayenne to everything!”

As the national spokesperson for AMVETS, Cahill supports the oldest and largest veterans service organization open to all American veterans in the U.S. Armed Forces, and the National Guard and Reserves, which advocates for veterans and their families. “AMVETS acknowledges all veterans who served, and, to me that’s important, because although my dad signed up, he never deployed for the Vietnam War or for the First Gulf War, but he did serve,” Cahill says. “He was in the National Guard, and, after he retired, he worked for the VA and then at Fort Hood Army Base. AMVETS stays on top of veterans legislation too. We can say, ‘Thank you for your service,’ but back it up with action and give five bucks to help provide service dogs to veterans, or help mow the lawn of the someone whose spouse is deployed. Simple, small acts build up.”

Cahill is a Gold Star Family member; during the Nov. 5, 2009 mass shooting at Fort Hood, considered the deadliest terrorist attack at the time since 9/11, Cahill’s father, Retired Chief Warrant Officer-2 Michael Cahill lost his life after charging the shooter with a chair. “My dad saved lives,” says Cahill about her father, who was working as a physician’s assistant and was the only civilian killed in the attack. “You become your habits, and my dad was always that guy who did the right thing versus the easy thing, like sticking up for and helping his patients and his soldiers.

When we found out about the shooting, we weren’t surprised at all that Dad did something. So if someone doesn’t seem okay, reach out and ask how they’re doing. My dad is remembered for his last dying act, but he was that guy all the time and his mission is not dead. I can be a megaphone, and speak out and accomplish the mission that way.”

Cahill also supports Help Heal Veterans, which provides therapeutic craft kits to hospitalized and homebound veterans. “In one of their kits, they honored my dad and did a wristband modeled off the leather cuff he wore. We added his signature and you have to sew it.” Cahill proudly wears her dad’s actual cuff on her wrist.

Last December, Cahill started Pocket Door Productions. “We’ve filmed three shorts and are doing a documentary about DEBAUCHERY! with Southern Rep, which is this ridiculously awesome live soap opera I’m in randomly,” Cahill says. “A short we did called Breasts goes out to film festivals this month and features an incredible team of Louisiana talent. I want to produce simple stories that don’t get talked about often like this one, about a mom trying to breastfeed while going back to work. We’ve partnered with the Mary Amelia Women’s Center at Tulane because they have a great program about pitching to businesses about making things breast feeding-friendly. What I like about Breasts is that women are behind the camera and in all aspects. You’ll get a different movie from a woman because it’s a different perspective.”

City Park is a favorite destination for Cahill and her dogs, Grey and Faytina. “They are big mutts that look and sound like Muppets,” says Cahill, who will be an honorary celebrity co-chair for the 2018 Louisiana SPCA Howling Success Patron Party & Gala. She also may attend the 2017 Out of This World-themed Howling Success Nov. 10 at the Hyatt Regency New Orleans. “With my veterans activism, we discuss how there’s no way to quantify how much a dog, particularly one trained to be therapeutic, can help someone with PTSD,” she says. “And don’t knock the power of having an animal for your mental health and to help lower your blood pressure, even one without all the specialized training. Dogs and humans really understand one another. A dog will wag their tail and be happy to see you even when you show up late; there’s no judgment and they love you! And when you help rescue an animal, you feel rescued yourself. Make space in your life to adopt a rescue dog. With all the animals for adoption after the hurricanes, the best thing to do to feel better is to give love away, right?” amvets.org, healvets.org, breaststhefilm.com, la-spca.org