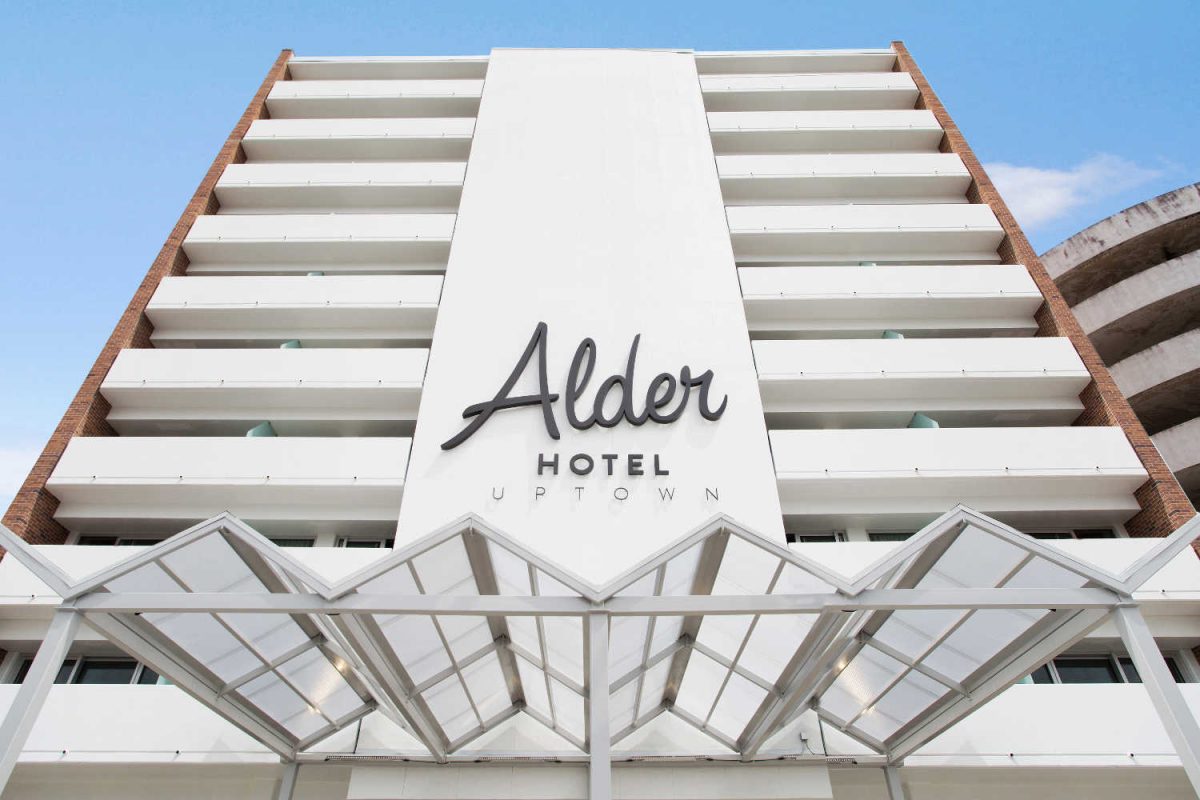 When talking about historic restorations and renovations in New Orleans, we’re often discussing buildings that are a century or more old, but the Alder Hotel that recently opened Uptown is quite a different animal. Built in 1964 by local architectural firm Mathes, Bergman & Associates, the Bristow Tower was originally created as a residence for physicians, nurses and other staff members of Southern Baptist (now Ochsner Baptist) and named after Dr. Louis J. Bristow who was a venerated superintendent of the hospital at the time of the tower’s construction. A rare and accomplished local example of the international or mid-century modern style of architecture, the building only recently became eligible to be included on the National Register of Historic Places in 2014.

Nearby resident and developer Greg Ensslen had been eyeing the building and considering it as a possible future project as early as 2007. “This building was a 10-story behemoth that had been sitting empty in the neighborhood where I live, and I knew that in just seven years, it would be eligible to be included on the National Register of Historic Places and therefore eligible for historic tax credits,” Ensslen says. “But for the federal historic tax credits and state historic tax credits, this building would still be languishing there.” Along with Chris Bellone, Woodward Alder and Valentino Investments, Ensslen was able to negotiate a long-term lease with Ochsner Baptist and begin work on the Bristow Tower. 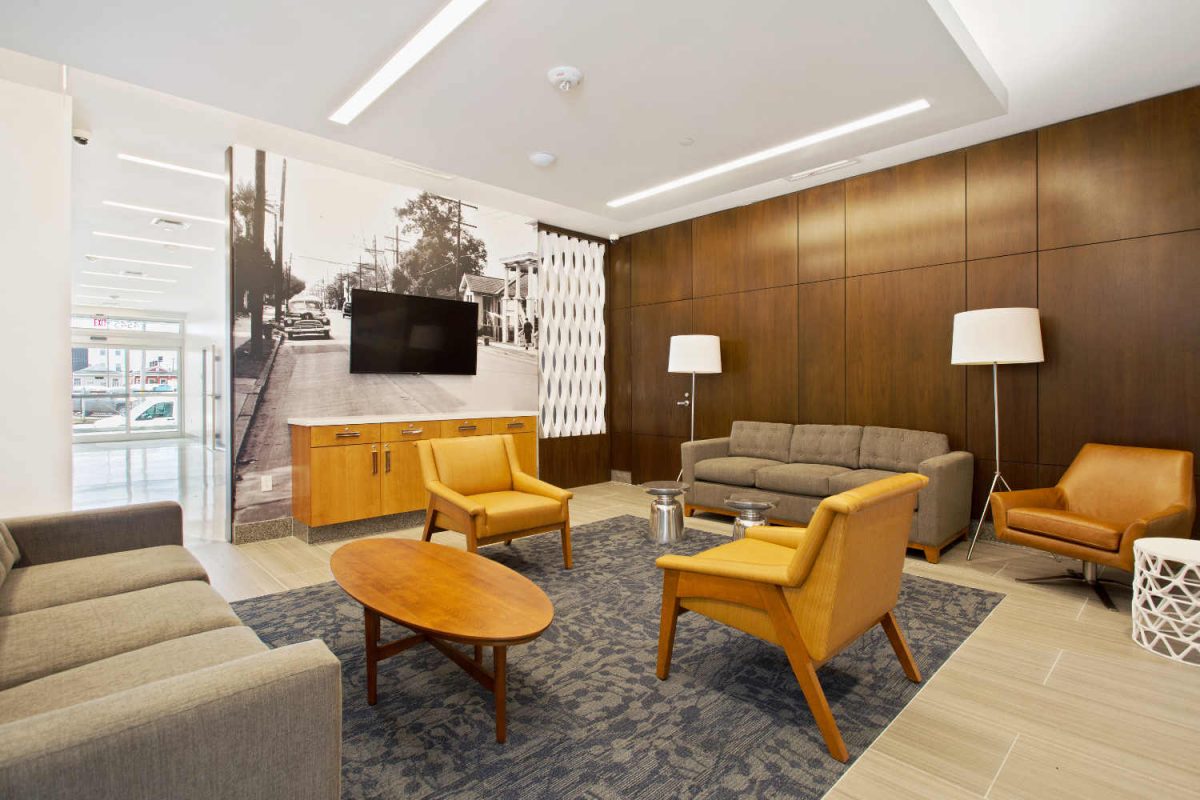 Vacant for more than 20 years, the Tower had become what Ensslen laughingly refers to as “a pigeonniere for all of Uptown,” but, after an extensive, two-year renovation, it has bounced back in the form of a unique, 90-room hotel conveniently located only two blocks from the booming Freret Street corridor. The development/ownership team tapped local architectural firm Woodward Design + Build to renovate Bristow Tower, a project managed by lead project architect Lisa Quarls and supported by superintendents John Choate and Kirk LaBorde. “The genre of the hotel is mid-century modern, or sometimes known as international style, so it’s somewhat of a unique architectural form, locally at least,” says Don Fant, director of design at Woodward Design + Build. “[The mid-century modern style] was late coming around here, but it had been around since the ’30s in other parts of the country. This is really a great example of that style.”

Working closely with the National Park Service and state preservation office, the designers were able to retain the historic feel of the property while using new materials. They created period-appropriate patterns in the terrazzo flooring, and, on the exterior, added a port cochere in the form of a folded plate-glass canopy that shades the front entrance. “I really like the signage on the outside of the building,” Fant says. “It’s this cursive script sign and it’s back lit in a bright color and it’s really … very eye-catching and very unique. I’ve sort of characterized it as George Jetson meets Don Draper.”

The Alder Hotel’s developers and architects both consider themselves fortunate to have hired interior designer Matthew Edmonds of CDI Solutions in Baton Rouge to complete the look of the building. Not only is Edmonds the owner and principal designer at CDI, he teaches interior design at Louisiana State University and just happens to be an avid devotee of the mid-century style. “We really lucked into this relationship with Edmonds, who is adept, favorable and really knowledgeable about this period of American architecture,” Ensslen says. Working closely with the architects at Woodward Design + Build, Edmonds selected furniture, light fixtures and fabrics that bring the whole design together, flawlessly evoking the era without sacrificing modern comforts or coming off as pedestrian. He even worked with The Historic New Orleans Collection to obtain old neighborhood photos, which he cleverly integrated into the decor, from graphic art pieces and wallpaper to the number plates for guest rooms. 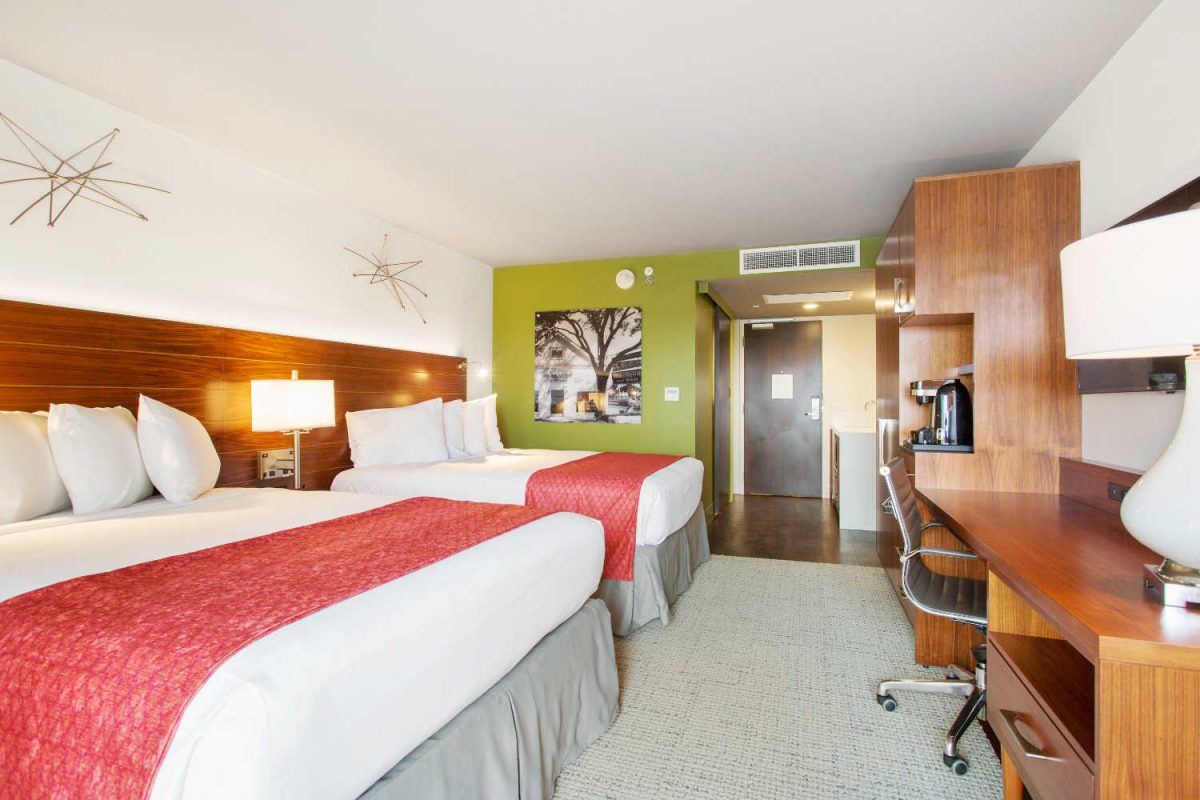 Since its opening in September, the response to the Alder Hotel, especially from the surrounding community, has been quite promising. “We had a job fair at Samuel Green Charter School and we got an overwhelming response from the neighborhood,” says Brandie Bodin, general manager of the Alder Hotel. “We’ve got good candidates here who can walk to work. Plus they’re excited to be here and see this development in their own neighborhood.” Aside from its close proximity to the hospital and all the action on Freret Street, the hotel’s other amenities include things like free WiFi, complimentary continental breakfast, a courtyard and swimming pool, a 24-hour Grab-N-Go market and pet-friendly accommodations.

If the decor and location aren’t enough, there are a couple of amenities that really make the Alder Hotel stand out from its competitors. First, they offer complimentary parking in a lot located right across the street, a very rare commodity for any hotel. Second, all 90 rooms feature balconies that offer either a view of the courtyard and glittering pool or the surrounding neighborhood. “It’s harder for us, being an independent, getting the word out there,” Bodin says. “But so far so good!” 4545 Magnolia St., (504) 207-4600, alderhotel.com